The motion of censure of PSOE in Linares (Jaen) against the mayor’s office citizens (Cs) In Andalusia, the orange formation started its last bastion in the community on Tuesday. Behind it is the provincial coordinator of the party in Jaén and mayor of Porcuna, Michael Morenowho has conspired in the shadows to blow up the mandate of Raul Caro-Accino.

Moreno was not present at the plenary session for the debate and vote on the motion at the Linares City Council, since he was inaugurating the new headquarters of the Civil Guard in Porcunawhich has received a grant from 221.345 euros of the State Public Employment Service (SEPE) following an agreement between the local government and the Ministry of the Interior.

The leader of Cs in Jaén also disregarded the official announcement of the party on the motion, a responsibility that he delegated to his ‘number two’, María Dolores Galiano, provincial secretary of Institutional Action. Interestingly, in the note there is no no trace of the mayor outgoing. She is neither pictured nor mentioned once.

In the image attached to the Cs Jaén statement, two of the unruly mayors of the orange formation do appear, smiling, Rafael Funes and Pedro Cintero. Both, distancing themselves from their own group and skipping party discipline, voted against the incompatibility of two PSOE councilors that paralyzed the motion of censure. The Mixed Court No. 1 of Linares has summoned them to testify – along with 13 other councilors – as investigated for an alleged crime of prevarication. Interestingly, the lawyer who defends both councilors is Gloria Madueño, wife of Miguel Moreno. After the trick on Caro, both Cintero and Funes were awarded for their loyalty to Moreno: the former was placed on the Provincial Committee and the latter on the regional lists.

It should be noted that the boycott of the provincial leader of Cs to Caro-Accino responds to the Moreno’s lust for power, known in Jaén for having organized an internal revolt in a Jaén PP that he was forced to leave. Once in Cs, he always had between eyebrows to be the reference orange mayor in Andalusia. A “wet dream” that seemed distant ruling Porcunaa municipality of just over 6,000 inhabitants, while Caro directed Linares, town with a population almost ten times greater. But the head of the Linares councilman brought him closer to his objective.

Meanwhile, former members of the orange party point to the close relationship between Moreno and the socialistsfirst promoting the motion, and now inaugurating a work in his city at the hands of the sub-delegate of the Government in Jaén, Catherine Madueno. “Curious that 222,000 euros are allocated to reopen the Civil Guard barracks in Porcuna,” they point out, highlighting the “good feeling” between Moreno and Madueño. 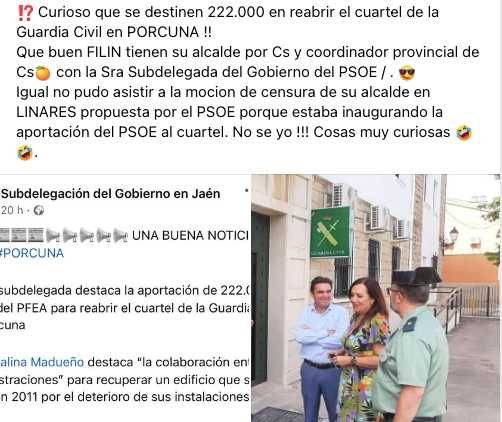 “He still couldn’t attend the motion of censure of its mayor in Linares proposed by the PSOE because he was inaugurating the contribution of the PSOE to the barracks. I don’t know, very curious things, ”a former affiliate has published on his social networks. It is worth mentioning that the work has also been financed, to a lesser extent, by the Provincial Council, the Junta de Andalucía and the local City Council.