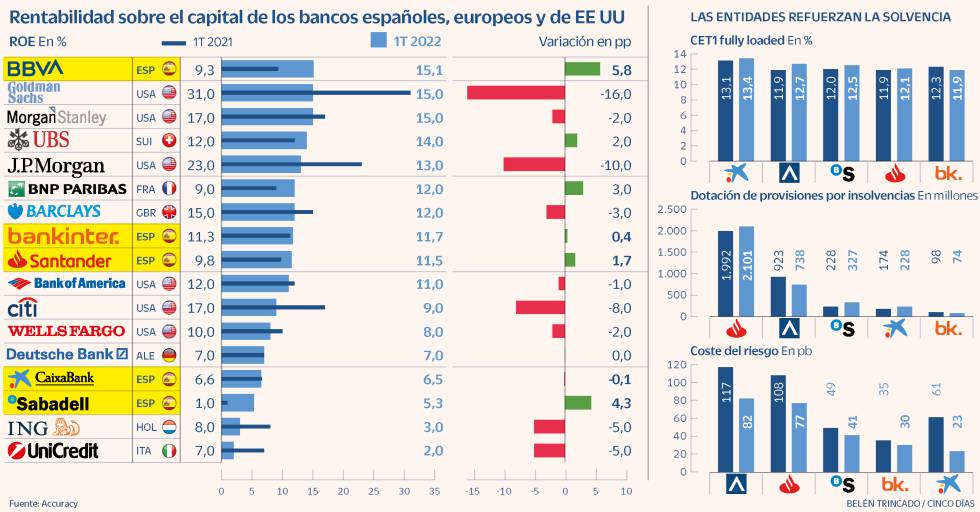 The great Spanish banks have broken the shackles that weighed down their profitability in recent years. In the first quarter of the year, the main entities recovered double-digit return on equity (ROE) indicators that, in some cases, had not been recorded for more than ten years and that has allowed them to match the leading European and US banks.

In a report published by the consulting firm Accuracy, which analyzes the financial results of the most relevant entities during the first quarter of 2022, it is reflected that the business of Spanish banks has experienced a great boost, which has allowed profitability to be recovered, one of the the great workhorses of the sector. Thus, BBVA It ranks as the most profitable bank among the main European and North American competitors, with an ROE of 15.1%, at the same level as Goldman Sachs or Morgan Stanley.

Equally, Santander (11,5%) y Bankinter (11.7%) are located in the environment of banks such as BNP Paribas and Barclays and above the US giants Bank of America, Citi or Wells Fargo. For its part, CaixaBank (6.5%) is still at yield levels below double digits, although in its case it is due to the fact that it has not yet received the wind in favor of interest rate increases. It is also waiting to experience the synergies of Bankia’s absorption. Equally, Sabadell (5.3%) is below the 10% in which the cost of capital is situated. However, it has recorded a remarkable growth in profitability in the last year. Both Catalan entities outperform large European banks such as ING or UniCredit.

On the other hand, the report highlights the strengthening of the solvency of the large Spanish banks. “The average CET1 ratio of the five main Spanish banks is 12.5%, which represents a sustained increase in recent quarters,” the document indicates. However, he points out that is still more than 2.5 percentage points below of the average of its large European peers, which are around 15%.

In addition, it points out that the increase in the default rate, once the moratoriums on loans and aid from public institutions ended, has not had the expected intensity, which is allowing reduce provisions for non-paymentimprove results and return to pay dividends and repurchase shares.

In addition, it highlights the decrease in cost of credit in the last 12 months in a context in which moratoriums are no longer in force, which shows “a generalized solvency in the clients of Spanish banking entities”. Similarly, he adds that the large increase in the volume of loans under special supervision experienced in 2021 is not being reflected in a similar increase in defaults at the moment and that a decrease in credits is even observed.

In this sense, Accuracy indicates that the containment of defaults and the general decrease in the cost of risk shows that “both individuals and companies are being able to meet their payment obligations” and that the secondary market for non-performing loans (NPL) is allowing banks “divest your non-strategic assets effectively, reducing your credit risk and lowering your need for capital.

With regard to provisioning, there is a difference between the entities and the consultant’s experts explain that it is not directly marked by business growth. “The presence in different geographies and the policies of each bank mark the growth or decrease of this item”, they value, and recall that we came from years of record provisions.

As for the industry outlookAccuracy believes that Spanish banks are facing “relative position of strength” to new adverse phenomena in the short term and underlying trends that will entail a profound transformation and that will require the mobilization of large resources. Even so, he estimates that the scenario is one of “moderate optimism” for Spanish banks in the coming quarters.

Digitization. All entities already offer services, attract customers, allow all kinds of products to be contracted and advise through digital channels. However, Accuracy points out that for successful digitization, the service needs to be more personalized, which requires heavy investment in data analytics.

Regulation. On the other hand, it highlights the challenge of meeting traditional requirements (capital, risks) with new requirements in other fields (climate change, cybersecurity) without weighing down business generation.