The right has lived fragmented and awaiting the advent of a new leader since Silvio Berlusconi was ousted from power in 2011. Since then, when his Italy looked bankrupt and a runaway risk premium called for the rebuke, history repeated itself in different ways, turning their replacement process into a farce. On Thursday, in the Roman piazza del Popolo, the right finally crowned its new great leader. Berlusconi and Matteo Salvini himself, who for a time aspired to that throne, had to accept that this space belongs today to the first woman in the history of the Republic with the possibility of reaching the presidency of the Council of Ministers.

Meloni closed the act, as befits the stars. He monopolized the biggest applause and fired the toughest and most ideological speech. “The cultural hegemony of the left has ended!” he proclaimed to the ecstasy of the militancy of the three parties. No one in the coalition discusses who will lead the way in the coming years.

The staging was what she wanted. “The day of defeat will come, but that day is not today. Let’s fight!” launched the presenter of the event, quoting a phrase from Tolkien’s Lord of the Rings, the work that fascinates Meloni and a whole generation of young heirs to the post-fascist Italian Social Movement (MSI). With that epic aroma, the leader of the Brothers of Italy came out, starting the applause of militants from the three coalition parties, unable to hide the excitement caused by her new strong woman. Meloni, as he has done throughout the campaign, combined his toughest line against the European Union, against the alleged finance lobbies and against the left, with his most responsible version. “They say we create fear. Do I scare you? ”, She launched her before an audience gathered around the great obelisk of the piazza del Popolo.

Squares used to function as a unit of measurement to gauge the strength of parties. The Piazza del Popolo, where some 70,000 people gathered at the height of the Communist Party, represented a certain power. On Thursday, the right-wing coalition failed to fill its capacity. The fight is fought today in the networks and on the sets. But the staging also served to calibrate the fineness of the electoral machinery to which all the polls give an overwhelming victory next Sunday.

“Together for Italy”, read the big banner on the stage. And that, the union that the three coalition parties are capable of displaying after September 25, is now one of the few unknowns to be resolved after Meloni’s public coronation. And for this, after days of internal disputes, they found a great master of ceremonies.

Silvio Berlusconi, one week away from his 86th birthday and lately suffering from all kinds of ills, agreed to act as opening act for the act. Il Cavaliere has not been on stage at a rally since 2020, in the Emilia Romagna regions. And this time, the owner of Mediaset, always the protagonist, compromised to go out first (probably also due to fatigue). He had to introduce his partners, gloss his work and launch a clear support for Meloni. And the trick worked. Berlusconi is the father of this conglomerate of parties that started 28 years ago now, as he himself recalled. He was the man who opened the doors of the palaces to the old and rude Northern League and whitewashed the post-fascists of the National Alliance, then led by Gianfranco Fini. He was also the prime minister who gave the alternative to a young Meloni as head of Youth in his last government. And he is still, in short, the father of almost everything that was seen on stage this Thursday. The problem is that, when he was able to do so, Berlusconi was unable to name a successor. And today, Brothers of Italy, a residual party only four years ago, occupies the space that corresponded to him for years.

Berlusconi, whose party presents itself as the guarantor of the coalition’s questionable Europeanism, is aware that his time has passed. Holding the lectern with both hands and holding Antonio Tajani’s arm, former president of the European Parliament, when he arrived and left, he reviewed the same topics that obsessed him 20 years ago and that he read in a small teleprompter. He asked for less taxes, less power for the judges who martyred him, more jobs and more freedom (it was not by chance that he invented the slogan “communism or freedom”). 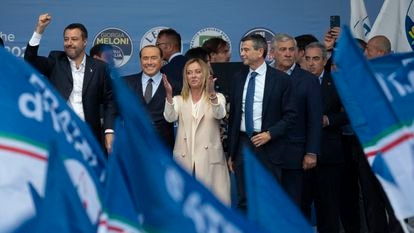 The leaders of the right-wing coalition, which unites Christian Democratic parties with ultras and post-fascists, at the massive rally they held this Thursday in Rome.

But, above all, Berlusconi did rhetorical juggling to unite the different ideas of the three coalition parties without showing the obvious: they think differently on many of the big issues that they will have to face during the legislature. “We must end the unanimous vote to make decisions in Europe,” Il Cavaliere launched. Just the opposite, for example, of what Meloni, a supporter of the right to veto, thinks.

The three coalition parties come to this meeting from diametrically opposed political and geographical traditions. Their relationship today is merely one of convenience. The Italian electoral law, a mixed system between the proportional method and the majority method, favors coalitions formed a priori. An almost essential condition to win and that the left has wasted due to its usual clan wars. But there are big issues they haven’t been able to agree on in the campaign. The sanctions against Russia —Salvini wants to eliminate them—; the tax system, the need to reform the European recovery plan or the requirement to incur a deficit to mitigate the effects of the rise in energy prices are just some of them.

The day after the elections there will also be a public dispute that has been buried until now: the list of ministers. Salvini and Meloni do not agree on practically anything in this regard. While the leader of the League has begun to launch names for different portfolios, the candidate of the Brothers of Italy remains silent and moves to convince heavyweights of the establishment for the most important portfolios. “The ministers will decide together,” Salvini warned him in the morning. The leader of the League aspires to repeat as head of the Interior, where he achieved great electoral support with his anti-immigration policies. But Meloni would prefer to avoid it. Not even in the approach to certain rights, such as abortion, the three parties think the same way. The size of the banner that spoke of the union during the rally, in short, is inversely proportional to the themes they share. But all that will have to be elucidated after September 25.