Drassanes public school is in the Gothic quarter of Barcelona, ​​the historic heart of the city. But most of the kids who go to their classrooms every morning do so from the other side of Las Ramblas, because they live in the Raval neighbourhood. The composition of the student body makes it what is administratively classified as a center of maximum complexity. “We like to say that it is a complex school in the sense of diversity: there are many families of different origins, our children are all multilingual, there are many ways of seeing the world. Actually, we believe that it is one of the things that gives value to the school”, comments its director, Alfons Espinosa i Miró. The school has other things that make it different. His way of teaching distances him from the traditional pattern and brings him closer to learning by competencies. And the center itself, its teaching staff, with the participation to a certain extent of the students, decide what to dedicate a good part of the timetable to. As in most primary schools, children like to go to school. Maybe a little more here. “They come happy, many are looking forward to the end of the holidays so they can return,” says Elisa González, the president of the center’s family association.

One of the novelties of the educational law, the Lomloe, is that the centers must set a percentage of the educational curriculum, that is, of what is taught. Or put another way, a part of the school schedule. Studies by international organizations such as the OECD and recent examples such as that of Portugal show that giving the school autonomy to adapt to its environment, its students and the characteristics of the center helps to improve results. The Ministry of Education thought of setting this percentage at a minimum of 10% of teaching hours. But during the Lomloe negotiation in Congress, the mention of a specific percentage reserved for the centers fell out of the text, which ended up establishing that each autonomous community would decide. 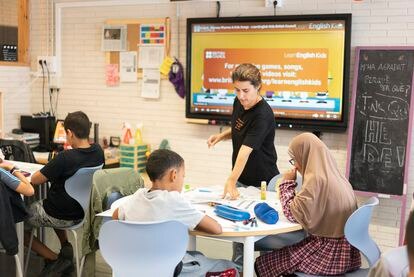 A class at the Drassanes school. Gianluca Battista

The consequence, according to the analysis that EL PAÍS has made of the regulations prepared by the 17 autonomous communities, is that some territories have left enough room for schools and institutes to decide on a part of their schedule. This is the case of Catalonia, the Valencian Community, the Balearic Islands, Andalusia and Cantabria. Others have left a few hours: Aragón, La Rioja, the Basque Country, Castilla-La Mancha, Extremadura and Galicia. And a last group has not left them any: Madrid, Castilla y León, Murcia, Asturias and, with nuances, Navarra. In the Canary Islands, which has not yet approved its rule, sources from the Ministry of Education assure that they will have a certain margin, but the centers have started this course without it.

Catalonia, with a long tradition of pedagogical renewal, is the one that has put the most time in the hands of the centers: 18% of the hours in primary and 13% in ESO. In many Catalan schools, such as Drassanes, the decision has not worried anyone because with the tacit acceptance of the educational inspection they have been organizing themselves in their own way for years. A part of the timetable in all Drassanes groups is dedicated to project-based learning, which is defined at the center level and in each class. “We always follow the pattern of the scientific method. A question is posed to the classroom, which is sometimes proposed by the teacher or sometimes by the children. For example, why do we cry? or why are bubbles round? They hypothesize, investigate, and come to a conclusion. The questions can be of any type, not just science”, says the director.

A group of third graders, in which a student had a relative who was in a wheelchair, decided last year to ask if their neighborhood was adapted for people with reduced mobility. “The children made their theories, went out to check them out in the neighborhood and reached a conclusion. We always try that, in addition to reaching a conclusion, they take the step of saying: what can we do with this? In this case, what they did was spread it to the families and they also wrote a letter to the mayor of Barcelona, ​​who later came one day to answer them, which is not usual, ”says Espinosa. Unai, who is 11 years old and is in sixth grade at school, prefers classes that involve movement and research than those that follow a more traditional approach by subjects (“systematized”, they call them at school), which are also taught in Drassanes. He also motivates him that the projects always try to include the perspective of trying to improve something in the environment. “I like that part because it gives a lot of things, a lot of life to the neighborhood,” Unai believes.

Giving more autonomy to the centers so that they strengthen their own educational projects also generates unknowns. One of them is if it can widen the inequality between schools, depending on whether they decide to advance more or less. Another is whether public schools, which have generally lagged behind private schools in this area (with many exceptions), are prepared for it. “In the public there is the problem of the instability of the templates. Each course usually varies by at least 20% or 30%, and it is difficult for a person who has just landed to share a project”, says Francina Martí, who until June presided over the Rosa Sensat teachers’ association. A student works in a class at the Drassanes school.Gianluca Battista

The communities that have decided to give freedom to their centers to decide a part of the schedule have given it above all to primary schools (the exception is Galicia, which has given little and only to institutes). Secondary school has a more complex curriculum and Selectivity is on the horizon and the matter also presents a greater organizational difficulty and a greater danger of altering social peace, says Antoni Salvà, director of a public institute in Mallorca. “Many times it is easier for everything to come than having to distribute it in the cloister. In primary there is the tutor and a few specialists. In the institutes, on the other hand, there are more than twenty specialties. This is detrimental to the autonomy of the center, but it is what it is”.

To avoid that, as has happened in the majority of Andalusian schools, the hours of autonomy that the centers gain are assigned to give more sessions of some subject, such as mathematics, without this necessarily implying progress in learning by competences, the Valencian Community has It has been established that the hours now decided by schools (11%) and institutes (6%) should be dedicated to “interdisciplinary projects”. The Valencian Teaching Federation of CC OO has considered the bet positive, but has warned that working on projects requires time, resources and “specific teacher training”. Cantabria has opened a similar path, but the centers decide whether to take it or not.

Esteban Álvarez, president of the association of directors of public institutes in Madrid, like other colleagues of his from communities where they have not been allowed to decide a part of the schedule, considers it a mistake. “It would allow the center to adapt to its students and the professionals it has, getting more out of them. What we ask is to have that autonomy and that it be linked to the necessary indicators to evaluate its operation and, if necessary, correct it”.

Budgets in times of inflation