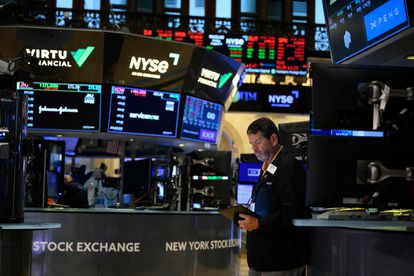 Investors have not gone on vacation. After facing turbulent times due to fears of a sharp economic slowdown, calm has taken over the financial markets. The Ibex 35 closed this Tuesday higher (1.01%) for the eleventh consecutive session, its longest positive streak since March 2009. The feeling that the price escalation may have peaked and that the central banks lift their foot of the accelerator in the tightening of its monetary policy have given stock market operators back their appetite for risk. But is this a clear trend reversal or a false dawn?

The Spanish selective has been placed above 8,500 points this Tuesday, something that has not happened since June 10. Compared to two months ago, when high inflation encouraged investor pessimism and the annual declines in some European indices reached 20%, the declines have been smoothing out: the Ibex 35 has reduced its losses to 2% so far. what’s going on this year; the German Dax 12%; the French Cac 8%, the Italian Ftse Mib 15%. For its part, the British stock market, due to the fact that the composition of its index exposes it to oil and raw materials, gains 2%. Wall Street is also benefiting from a strong uptrend. After entering a bear market in June – having lost more than 20% of its value since its last peak – the S&P 500 has halved its year-on-year decline, which now stands at around 10%.

Most European investment fund managers trust in the revaluation of the parks. 55% of those interviewed for the monthly survey by Bank of America believe that the equities of the Old Continent will continue to rise in the coming months, when a month ago this percentage accounted for only 43% of the total. But is that comeback sustainable in the long term?

The recovery of the markets could be reliable as long as two clear points are respected: the resilience of private consumption and strong corporate profits, warns Javier Molina, an analyst at eToro. “Despite adjustments in retail sales or declines in consumer confidence, we are not yet in a difficult situation. However, if consumption starts to contract in the face of rising costs, the surge in stocks that is taking place may just be a dead cat rebound,” he adds.

Better-than-expected second-quarter corporate earnings also encouraged investors to buy stocks. “Without exceeding forecasts by such a high margin as on previous occasions, they have served to reduce the market’s fear, as it was seen how companies resisted quite well despite the increases in interest rates and the worst macroeconomic data,” says Álvaro Arístegui, analyst at Renta 4.

But the indicator that most reassured the financial markets was US inflation in July, which, although high, was below expectations, at 8.5%. The fall in crude oil prices, which have been one of the main drivers of rising costs in the last year, has allowed a truce. An encouraging figure that, according to some analysts, opens the door to a certain softening in the restrictive policy of the Federal Reserve after the four interest rate hikes implemented to date.

The monetary tightening of the US central bank transmits two key signals, Juan Carlos Ureta, executive president of Renta 4, warns in a note: “On the one hand, the message, very clear, that the free bar has ended, and, on the other , the message, a little more subliminally, that there will continue to be some level of financial assistance to avoid disasters in the economy”. The Federal Reserve—and the European Central Bank, albeit a little later—is taking on a very fine mission: to raise the price of money to control inflation without causing a slowdown in the economy.

A challenge that forces monetary institutions to weigh each step, which opens the way to possible misunderstandings by investors. In fact, the Fed has warned that it will continue to monitor prices closely, but the objective of maintaining an inflation rate of 2% is still a long way off. A scenario that will encourage Washington not to abandon its aggressive stance, at least in the short term, which may surprise the markets. “Those who have welcomed the stock market rally may be stuck. It is true that the markets are discounting the recent good news, although the winds of recession have just begun,” says Molina.

The cautious tones in the face of the rise in global markets are being heard. BlackRock, the world’s largest mutual fund manager, believes that the current rally in equity assets is not sustainable. “Corporate profits may weaken further as consumer spending changes and profit margins contract,” she said in a statement released Tuesday.

The New York-based firm puts on the table another reason why analysts’ expectations seem too optimistic: the large differences between sectors. “High oil and gas prices have brought record profits to energy companies, but in the long term those profits could be eroded by the drive towards decarbonisation,” the company adds. Uncertainty about the evolution of consumption habits and the slowdown in growth pose risks.