The human minds behind the artificial minds 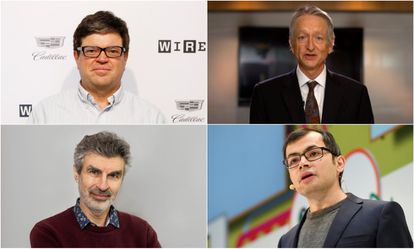 The contribution of artificial intelligence to many of the technological and scientific advances and challenges achieved in recent years is behind the recognition that Geoffrey Hinton, Yann LeCun, Yoshua Bengio and Demis Hassabis have received.

In the last century, the scientific community has speculated on the possibility of building machines capable of performing intelligent tasks, hitherto reserved for human beings. Although, at the moment, we are not close to reaching something similar to the so-called general artificial intelligence, the use of what are known as weak or narrow artificial intelligences (NAI) is very common in social networks, recognition systems facial and natural language analysis, for example. The Princess of Asturias Award for Scientific and Technical Research recognizes this year some of the architects of the formulation and development of the algorithms that make this type of intelligence possible.

NAIs are algorithms specialized in certain tasks in which they can achieve performances much higher than those of human beings. However, they are unable to perform tasks other than those for which they were designed and trained. Currently, the NAI perform tasks that were intractable for machines until just twenty years ago. These include both image recognition and natural language processing.

This milestone was possible thanks to the appearance of neural networks. Originally formulated in the 1940s, it was not until the 1980s that they began to show their great potential. Today, the term neural networks designates a family of algorithms with a high capacity for adaptation and performance, based on its mathematical formulation and also on the incredible increase in computational capacity experienced since its formulation. These algorithms were born with biological inspiration: their aim was to emulate the human brain. Its most fundamental structure is made up of artificial neurons that play a role analogous to neurons in real nervous systems. These simple units are arranged in parallel, forming processing layers. Learning in neural networks consists of building a system with several of these layers stacked and training each neuron individually.

The number of layers of the system defines the depth of the network and, only when we have two or more of these, the term deep learning or deep learning is used. These types of deep networks can be used to perform, even more accurately than single-layer networks, various types of tasks and data sources: from text analysis and comprehension, to finding elements in an image and describing the scene in real life. a photograph, and even suggest new music based on our preferences.

The work of Geoffrey Hinton, Yann Lecun, Yoshua Bengio, popularly considered the fathers of deep learning, as well as Demis Hassabis —CEO and one of the founders of DeepMind, a company behind some of the most important milestones in artificial intelligence—, has been crucial in developing the capabilities of deep neural networks and in our current understanding of them.

Hinton, Lecun, and Bengio used the idea of ​​backpropagation to expand the original mathematical formulation of neural networks and allow training of networks with more than one layer. Hinton introduced this concept in 1986, first allowing deep neural networks to properly perform a task on a set of data. These techniques make networks self-correcting by making groups of neurons learn to recognize the relevant features of the input data, combining a custom design for each task with a set of common training principles. This allows them to exploit intrinsic characteristics of the data and perform specific tasks with high precision. In addition, they can be made to pay attention to the spatial arrangement of the data —such as the pixels in an image—, as well as models that take into account their temporal succession —such as the meaning given by the order of the words in a phrase-.

For his part, Demis Hassabis is one of the most influential modern figures in artificial intelligence research. Among other milestones, his company, DeepMind, is the creator of AlphaGo —an artificial intelligence capable of beating human champions in Go—, of AlphaFold —an algorithm that, in its latest version, allows predicting the three-dimensional structure of a protein from its amino acid sequence—, or Cat—a generalist agent that, thanks to the power of its formulation, is capable of performing more than 600 different tasks, including chatting with users, playing games, describing images and manipulating robotic arms—. The latter, while still far from being a truly intelligent agent, is a promising step in the direction of the holy grail of artificial general intelligence.

Although it is difficult to predict if DeepMind, or any other company or research center, will eventually succeed in creating artificial general intelligences, the impact of all these techniques has been enormous in the last 20 years and, without a doubt, will be even greater in the immediate future. Specifically, the contributions of these four scientists to the field of artificial intelligence have been and will be crucial in shaping modern industrial societies and also in confronting some of the great problems of the 21st century, such as climate change.

Simón Rodríguez is a postdoctoral researcher at the ICMAT.

Café y Teoremas is a section dedicated to mathematics and the environment in which it is created, coordinated by the Institute of Mathematical Sciences (ICMAT), in which researchers and members of the center describe the latest advances in this discipline, share points of encounter between mathematics and other social and cultural expressions and remember those who marked its development and knew how to transform coffee into theorems. The name evokes the definition of the Hungarian mathematician Alfred Rényi: “A mathematician is a machine that transforms coffee into theorems”.