The history of design, from the supermarket to the museum, is told in ‘La gran D’ by Podium Podcast 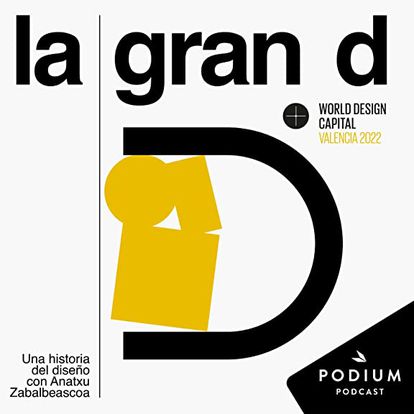 The image of the podcast La gran D, produced by PRISA Audio.

The same product can be sold in the supermarket and exhibited in a museum at the same time. Why? By its design. A juicer, a mobile, a mop, a chair and a video game share the condition of being design objects. Are they attractive and functional? Are both attributes always compatible? What about plastic, the panacea for designers in the sixties, in these times of climate emergency? Design is present in all walks of life, in everyday life, and in Valencia, especially, because this year it is celebrating the world capital of design. For this reason, the organization commissioned the development of a podcast on the history of design that answers these questions and many others over eight half-hour episodes in which renowned professionals such as Philippe Starck, Paola Antonelli, Patricia Urquiola, Javier Mariscal, Inma Bermúdez, Nacho Lavernia, Juli Capella or Dejan Sudjic. 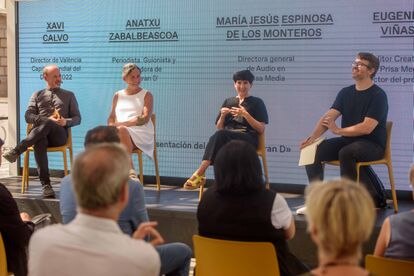 From left to right, Xavi Calvo, Anatxu Zabalbeascoa, María Jesús Espinosa de los Monteros and Eugenio Vilas, at the Àgora in Valencia, this Monday, at the presentation of ‘La gran D’.

The big D is the name of this podcast produced by Podium Podcast, PRISA Audio’s native podcast platform, whose first chapter premiered this Monday. The audio is narrated by the cultural journalist, expert in design and architecture, Anatxu Zabalbeascoa, author of the script, and directed by fellow journalist Eugenio Viñas. Its recording has meant a great effort in a double sense: of synthesis, for the purpose of approaching history, although not in a chronological or academic way, and the content of a discipline so polyhedral and rich that it is not easy to define it; and creativity, due to the need to express with words, audio, sound effects and music, the tangible and basically visual nature of design.

Anatxu Zabalbeascoa referred to both issues this Monday in the presentation of the podcast held at the Àgora in Valencia, the epicenter of events in the capital, in the company of the director of PRISA Audio, María Jesús Espinosa de los Monteros, the director of Valencia World Design Capital 2022, Xavi Calvo, and the director of the podcast, Eugenio Viñas. Among the public there were several national design awards, such as the Valencians Marisa Gallén, Lola Castelló, Nacho Lavernia or Pepe Gimeno; renowned professionals such as Inma Bermúdez or the businessman from the firm Andreu World, Jesús Llinares.

Each week a new chapter will be offered until its conclusion, and from then on you can listen to the four hours in a row that La Gran D adds. The podcast can be accessed for free on the Podium Podcast website and app, as well as on the other audio platforms: Spotify, Podimo, Apple Podcast, Amazon Music, iVoox and Google Podcast. 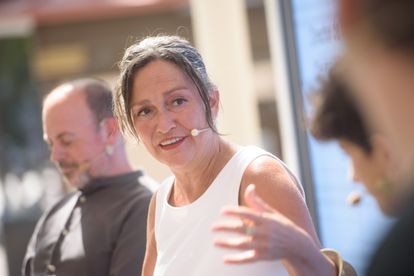 The scriptwriter and narrator of the podcast Anatxu Zabalbeascoa, during the presentation.

“It is a rarity to spend your whole life writing and suddenly they shake your hand to narrate with a voice,” said Zabalbeascoa, a regular signature of El PAÍS. “As a gift, as a legacy of the capital, the podcast could not be more timely: it is sustainable, free, open to everyone. It goes with you, you can take it anywhere, and you can come back to it whenever you want.” “It will surely be halfway between the academy, which sometimes produces some rejection, and TikTok,” he added. All this, from a format for all audiences, a simplicity that reflects the graphic image of the podcast, designed by the Valencian Agency Player.

The big D aims to explain what design is in all its complexity, from its close relationship with sustainability, through all its facets, contradictions and unknowns, to the vision of the great masters and the contributions of forgotten figures. For example, there is a chapter dedicated to designers whose names were largely overshadowed by that of their partners, as is the case of Ray Eames, among others.

“The emergence of the podcast in recent years has been extraordinary and we wanted to be able to tell this story, as Valencians and as people especially interested in design,” said the director of PRISA Audio, María Jesús Espinosa de los Monteros. “The truth is that there is no similar podcast in Spanish in the whole world,” she added. The director of PRISA Audio predicted that La gran D could become a reference for design students.

The director of the podcast, Eugenio Viñas, for his part, highlighted the editorial freedom that the Valencia World Design Capital 2022 organization has granted for its production. 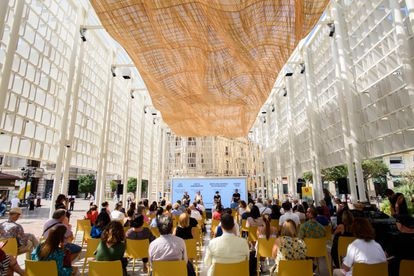 The public has filled the Àgora, in the act of presentation of ‘La gran D’.

This is the first time that a Spanish city has achieved this designation, which is granted by the World Design Organization —based in Montreal, Canada— and whose objective is to disseminate design as a fundamental tool for improving communication, the business product and the life in general.