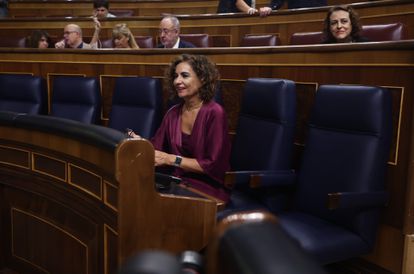 The Government is not only working on the creation of a new tax so that the great fortunes contribute more, which would be added to the existing one on the net worth of the richest. In parallel, it is also studying applying a surcharge on personal income tax for the wealthiest, with a rise in the rates of the tax base for savings, according to government sources. This last measure would affect the increases in equity, such as the income obtained from the sale of a property, as well as the returns generated by financial assets.

The Minister of Finance, María Jesús Montero, advanced on Thursday that the new tax on large fortunes on which the Executive is working will be temporary and would come into force at the beginning of 2023. The minister did not add more details, but pointed out that it is necessary to study how it is processed, since “not everything” can enter the General State Budgets. In fact, the accounts can only include changes to existing taxes, while the creation of new taxes requires ad hoc regulations, and Treasury technicians are studying how to make large fortunes pay more taxes without falling into double taxation, as there is already a tax on the net worth of the richest.

This tax, the wealth tax, introduced at the end of the 1970s, abolished in 2008 and recovered in 2011, is paid once a year and is levied on wealth as a whole, such as real estate, bank deposits, dividends and other luxury goods. such as jewelry and works of art. Although its character is state, it is a tax ceded to the communities. That is to say, its management depends on the regional governments and each territory can apply the deductions and bonuses that it considers by virtue of fiscal autonomy. To the point of completely nullifying the collection of the tribute.

This is the case of Madrid, the first community that subsidized 100% of the wealth tax, in 2008. Until now it was the only autonomy to provide such a generous tax benefit, but the president of Andalusia, Juan Manuel Moreno Bonilla, has just inform that the Board will follow the trail. The announcement is added to other tax reductions presented by the PP communities and has reignited the debate on the taxation of the richest and tax harmonization between territories.

“I think it would be good if we all cooperated so that the wealth of our country could advance and prosper, and that there are no tax havens either in the EU, or within our country,” insisted the head of the Treasury, after defending the need to “ask for a greater effort” from those who are having extraordinary benefits in the current economic crisis. She included energy companies and banks in this group, for which the Treasury has already designed an extraordinary and temporary tax for additional income from rising interest rates and higher energy prices. “But it is also the case of the great fortunes of our country, who are asked to make an additional temporary effort,” she added.

Montero clarified that a “scheme similar” to the one used for the new taxes on energy companies and financial entities will be used, which are not taxes, but patrimonial benefits of a public nature – a kind of spill – and which will be in force for two years. “Our idea is that reference and that it comes into force as soon as possible, but we have to wait until we have this tax,” he said Thursday in an interview on the Al Rojo Vivo program. “What does not make any sense is that the Government of Spain is witnessing news of tax cuts in the territories while we ask Europe for 140,000 million (….), in the same way that it makes no sense that there are autonomous communities that ask for money to the Government of Spain while, within the framework of their powers, they lower taxes”, he settled.

Podemos had proposed in 2020, after the pandemic broke out, to replace the wealth tax with a new figure that would tax the richest, without the possibility of a bonus by the communities. The measure did not go ahead and last spring, as a result of the economic crisis unleashed by the Russian invasion of Ukraine, the purple formation once again pressured its government partner by registering a legislative initiative to “complement” the current tax on wealth, raising marginal rates and modifying the brackets for fortunes of more than 10 million euros.

The surcharge on capital income, on the other hand, could be approved through the Budgets. The coalition government has already used this instrument to raise rates on the tax base of savings: in the 2021 accounts it raised them by three points for capital income of more than 200,000 euros, and by two for income from work above the 300,000 euros. But you still have room to raise them. The coalition agreement between PSOE and United We Can foresaw that the rate hike would be more marked for both tax bases: two and four points for labor income that exceeded, respectively, 130,000 and 300,000 euros, and four points for those of savings of more than 140,000 euros. The document also states that “the taxation of large fortunes will be studied in order for them to contribute to a fairer and more progressive tax system,” without giving more clues about specific measures.

The OECD cuts Spain’s growth to 1.5% in 2023 and forecasts that Germany will enter a recession

Celsa’s creditors claim 100% of the capital in court

Andalusian budgets, the moment of truth