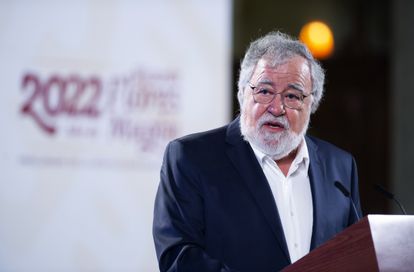 Alejandro Encinas, Undersecretary of Human Rights, this Friday during the morning conference of the Government. Presidency of Mexico (EFE)

The Government of Mexico assures that an Army colonel, José Rodríguez, ordered the assassination of six of the 43 normalista students of Ayotzinapa. This was said this Friday by Alejandro Encinas, Undersecretary for Human Rights, in charge of the presidential commission investigating the case. “It is presumed that six of the students were alive up to four days after the events,” Encinas said, referring to the day of the attack, the night of September 26 and the early morning of September 27, 2014. “And that they were killed and disappeared by orders of the colonel, presumably Colonel José Rodríguez.” It is the first time that the Government indicates the active participation of the military in the attack against the students.

The commission’s report on the case, released last week, suggested that a group of students had been kept alive after the attack. But Encinas’s words this Friday raise the degree of probability. Starting on page 88, the report reproduces a table indicating the possible fate of the students. There he points out that “the colonel had commented that they had already taken care of six students who had remained alive.” At the presentation of the report, Encinas did not say that the colonel was “allegedly” Rodríguez.

Colonel Rodríguez was the commander of the 27th Infantry Battalion, based in Iguala, at the time of the attack. Promoted to general during the administration of Enrique Peña Nieto (2012-2018), it is not the first time that his name appears linked to the criminal group that perpetrated the attack, Guerreros Unidos. The statements of one of the protected witnesses in the case, whose name was aired on numerous occasions, Gildardo López, alias El Gil, an alleged member of the group and part of the network of attackers, already pointed to Rodríguez. El Gil has said these years that Rodríguez was on the payroll of Guerreros Unidos.

In Encinas’s appearance this Friday, the undersecretary has shown slides showing Rodríguez’s alleged contact with a member of Guerreros Unidos the night of the attack. The slide shows that El Chino “reports” to the colonel. And that the colonel “gives orders and coordinates” with him. The image also shows El Chino’s contact with Captain José Martínez Crespo, currently in prison, accused of organized crime, for his alleged collaboration with Guerreros Unidos. As EL PAÍS has learned, Rodríguez is one of those wanted by the Prosecutor’s Office after the announcement that the investigating agency was searching for and arresting 20 soldiers last Friday.

Encinas dedicated the first part of his appearance to responding to criticism of the report, which concludes that the disappearance of the 43 students in the state of Guerrero in 2014 was a “state crime.” The undersecretary revealed on the day of the presentation, August 18, what until now no high-ranking official of the Mexican government had expressed in public: that there are no indications that the students are found alive. “Many of the criticisms that are raised show that the document has not been read,” Encinas pointed out. “This report is the result of a process of investigation and technical and scientific analysis, but yes, there is also a political content,” the official continued, “because clarifying a State crime is an issue that we have faced with conviction and will. politics”.

The report was prepared by the Commission for Truth and Access to Justice launched three and a half years ago by order of President Andrés Manuel López Obrador. The objective of the body is to clarify what happened to the disappeared students in the municipality of Iguala in 2014 and where their remains are. After the disappearance of the 43, the Government of Enrique Peña Nieto rushed to present a story stating that the students had been executed and burned in a garbage dump, and their remains had been dispossessed in a river. The then-prosecutor Jesús Murillo Karam — arrested a day after the recent report was released — himself used the term “historical truth” to present that thesis in 2015.

The undersecretary has marked “a substantial and substantive difference” with the narrative elaborated during the past Administration: “The historical truth was based on the statements obtained through torture, the fabrication of evidence and the manipulation of the crime scene. We absolutely do not torture anyone.” The investigation also questions that version. The document denies that the students were “arrested, executed and burned in the Cocula garbage dump” and that their remains were “scattered in the San Juan River”, denies “that the disappearance was a fortuitous event”, “that the students were taken to the municipal headquarters of Iguala” and that they were “handed over by the police to Guerreros Unidos,” and rejects “that the disappearance was ordered by El Gil.”

The undersecretary has specified that the investigation, which is still underway and that still does not clarify the fate of the students, presents a “minute by minute” reconstruction of what happened between ten o’clock at night on September 26 and six o’clock in the morning. morning of the 27th, from the time the students left the Ayotzinapa normalista school until their disappearance: “We have been able to determine the way in which the Guerreros Unidos criminal group was articulated with authorities from different levels of the Government. We have proven how, at all times, the authorities followed up on the actions of the students, who had been monitored for days prior to the mobilizations that were to take place on October 2 in Mexico City, and how they were aware of their leaving the normal school, his arrival in Iguala and the events that preceded his disappearance.”

According to the report, this proves not only “responsibility for action, omission or negligence” but also “the involvement of authorities in the disappearance of the normalistas.” After the presentation of the document, a judge ordered the arrest of 20 “military commanders and troop personnel” and the capture of 44 policemen, 14 alleged criminals, members of Guerreros Unidos, and five “administrative and judicial authorities” of the State of Guerrero. This Friday, Encinas has indicated that the Government hopes that other arrests will be carried out “in the next few hours.”

Carlos Alcaraz turns into gold: he received virtually 10 million in 2022

What does it mean to approve the draft Constitution in Chile?