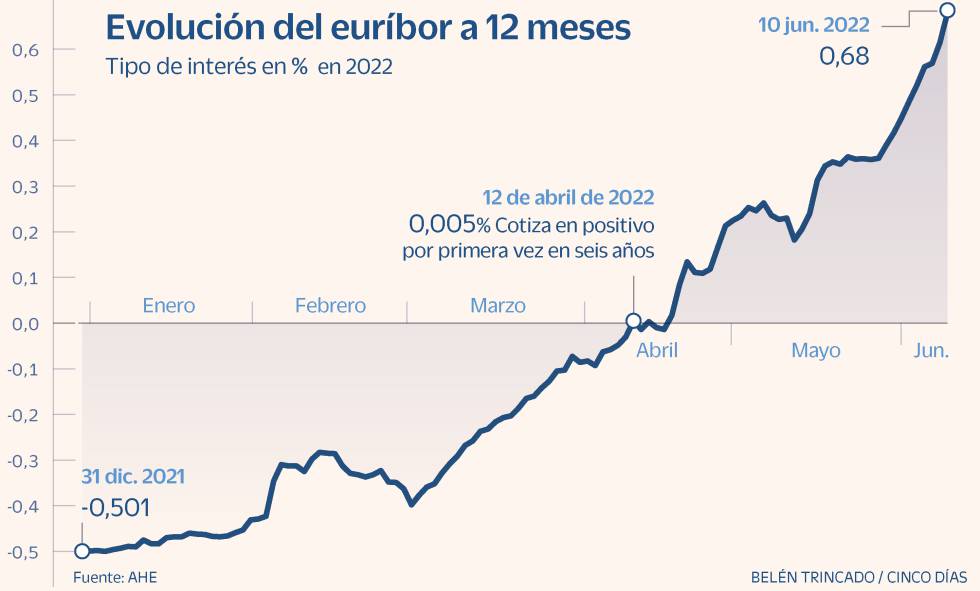 The 12 month euribor, key for the calculation of the majority of variable mortgages in Spain, continues to rise relentlessly and already exceeds 0.6% in the daily rate. In the ten days of June, it has shot up 29 basis points. Specifically, today marks the 0,68%, levels not seen since October 2012, and places the provisional average for the month at 0.537% compared to -0.484% just a year ago. Thus, the variable loans under review will rise considerably: they could become more expensive between 600 and 1,800 euros per year depending on the amount.

According to the president of the Spanish Mortgage Association (AHE), Santos González, a rise in the Euribor of approximately one percentage point for the year as a whole would mean an increase of between 10% and 12% in the monthly installment of an average mortgage of about 150,000 euros. This would translate into an increase of almost 70 euros per month and more than 800 euros per year. If the outstanding capital is 300,000 euros, the fee would rise by 139 euros per month or 1,600 euros per year.

The Euribor has skyrocketed in the face of the imminent rise in interest rates in the euro zone. The ECB confirmed yesterday that it will carry out a hike of 25 basis points in July, the first upward movement in more than a decade, to curb high inflation, and opened the door to more pronounced increases, of 0.5% , in the future. The announcement caused the debt returns. The Spanish two-year bond rose 20 basis points at once, from 0.95% to 1.16%.

The agency announced a second increase in September, although without specifying how much it will be. From there, the monetary authority anticipated that there will be a “gradual” path of increases in interest rates with the aim of redirecting inflation to a rate of 2% in the medium term. Most of the world’s central banks have already raised the price of money this year, and some such as the US Federal Reserve (Fed) or the Bank of England have done so on several occasions.

“High inflation is precipitating the actions of central banks. In addition, the war in Ukraine continues to generate great uncertainty about the evolution of the commodity market,” says Joaquín Robles, an analyst at XTB, who points out that “the big winners of This situation will be the banking entities, which will see how all the outstanding capital of mortgage loans referenced to a variable rate has an increase in its profitability and, therefore, generates higher profits”.

Those affected will be the holders of variable mortgages. However, a few days ago, the First Vice President of the Government and Minister of Economic Affairs and Digital Transformation, Nadia Calviño, estimated that the impact that the rise in the Euribor will have on the mortgages of Spanish citizens will be “relatively limited”. In his opinion, it should be taken into account that, despite the upward trend it has been registering since mid-February, the Euribor is currently at “historically low” levels, to which it must be added that fixed-rate loans have gained weight in the Spanish mortgage market and that mortgage effort indicators are also at minimum levels. Thus, she believes that the impact it may have on the mortgages of Spanish citizens will be diluted by the characteristics of the Spanish mortgage market.

The Euribor is an indicator of the financing cost of banking entities and determines what the prices of loans will be, especially variable-rate mortgages. It entered into force on January 1, 1999 and reached its maximum in October 2008, when it stood at 5.5%. Starting in 2016, the market experienced an anomalous situation of negative rates that led the indicator to trade below the zero threshold. The historical minimum was registered in December 2021, at -0.518%. Now, the scenario has begun to change with the announcement of a normalization of monetary policy. Thus, in April it returned to positive ground for the first time in more than six years and is now on its way to 1%.

Calviño pointed out that the indicator is significantly below its historical average, which stands at 1.8%, and analysts forecast that “it will be around 1% by the end of 2023.” However, the forecasts of many experts are falling short. Bankinter’s analysis department estimated that the Euribor would end this year at 0.4%, a level that it has already left behind. Victoria Torre, from Singular Bank, points out that “the dispersion in the estimates is very significant” and there are those who believe that the Euribor will end the year at around 1% and those who even see it at 2%.

This environment is causing more than half (72.7%) of mortgages to be signed at a fixed rate, despite the fact that some prices already exceed 3% APR. However, most of the mortgages constituted, close to four million, continue to be at a variable rate. Luis Alberto Iglesias, from Value School, believes that given the rise in the Euribor “the most prudent thing for those who are considering taking out a mortgage is to do it at a fixed rate, thus covering themselves against the foreseeable rises that we will see over the next twelve months” .