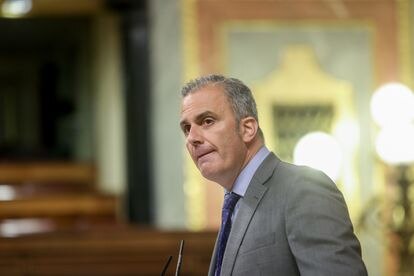 The general secretary of Vox, Javier Ortega Smith, during his speech this Tuesday in Congress. Ricardo Rubio (Europa Press)

It is already rare to hear the only Compromís deputy, Joan Baldoví, praise an intervention by the parliamentary spokesman for Ciudadanos, Edmundo Bal, a fierce critic of the positions of nationalist groups such as the Valencian one. But the scene summarizes what happened this Tuesday in Congress before a Vox proposal to reform the Penal Code and not punish those who shoot at people who assault their homes or businesses. The initiative elicited the unanimous rejection of all the others and not exactly in kind terms. Bal was very tough, also the PP deputy Miguel Ángel Jerez, although not as much as the BNG representative, Néstor Rego, who called the defender of the proposal, the secretary general of Vox, Javier Ortega Smith, a “gunslinger Smith”.

Vox’s bill sought to reform the Criminal Code to establish that those who use “any means of defense” and “regardless of their result” against assailants at their homes or at business premises and workplaces would be free from criminal liability. Ortega Smith went on to relate cases of people who have been convicted of shooting, sometimes resulting in death, at strangers who had broken into their homes by force. He described such behavior as heroic and promised: “If we govern, not only will these people not go to jail, but we will give them a medal for helping us fight crime.”

The intervention of the general secretary of Vox raised a clamor in which almost everyone participated. Some spoke of “law of retaliation”, others of “law of the jungle” and Bal of “Lynch’s law”: “You pretend that anyone is above the law and can dispose of the lives of others”. The Ciudadanos spokesman revealed that, in one of the examples Ortega Smith had resorted to, the accused ended up being acquitted. Bal, like the rest of the spokespersons later, defended that legitimate defense is already contemplated in the law, but that it has to be proportionate to the aggression suffered.

Several deputies from the left recalled that Ortega Smith released a video some time ago on social networks in which he was seen firing a rifle at military installations. It was there that the deputy of the “Galician Separatist Bloc”, as the leader of Vox called him, baptized him as “gunman Smith”, amid protests by the aforementioned that were not heeded by the presidency. The PP did not descend to personal disqualifications, but the rejection of its deputy Miguel Ángel Jerez also sounded forceful: “Spain is too safe a country for citizens to have to keep pistols on the nightstand.”

“The cabin of the Marx Brothers”

The opening of the plenary session of Congress this week brought about another episode of disagreements between the partners of the Government. United We Can presented a proposal to demand that Sareb, the so-called bad bank that took over the toxic real estate assets of the old savings banks, put the homes and land it has at the service of cheap rents and public promotion. The PSOE rejects the idea and presented an amendment to the initiative, which both parties will negotiate until Thursday, when a vote is taken. Also in this case the reproaches to the partners of the Executive for their discrepancies fell on him from everywhere, including his usual parliamentary allies. “This is the cabin of the Marx brothers,” snapped the PDeCAT spokesman, Ferran Bel.

Later, sparks flew between PSOE and UP again due to an ERC motion on the criticism that various international organizations have directed at the judicial response to the Catalan independence process. The president of the UP group, Jaume Asens, starred in a very racy speech, in which he denounced the “noise of togas” and argued that “it is the judges who are actually in charge in Spain.” Asens personalized his attacks on the president of the Second Chamber of the Supreme Court, Manuel Marchena, and continued his verbal escalation until he reached the president of Congress herself, Meritxell Batet, who was listening to him at that moment in her seat just behind the tribune of speakers. The Catalan deputy denounced the “unprecedented infamy” which, according to him, meant depriving his partner Alberto Rodríguez of his seat, after he received a light sentence for assaulting a policeman years ago, and accused Batet of “abdicating his functions”. The president endured undaunted, although her group did not. The socialist deputy Arnau Ramírez replied acidly to Asens: “You should ask yourself why you have only 3 of the 135 seats in the Parliament of Catalonia.”

LTE Patents: Most of the auto industry now licensed by Avanci

Guterres warns of "a winter of discontent" due to the war in Ukraine, inflation and inequalities