The employers do not see a wage agreement necessary 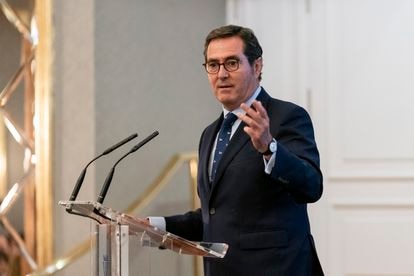 The president of the CEOE, Antonio Garamendi, this Thursday in Madrid.A. Pérez Meca (Europa Press)

Hours before the meeting on the Income Agreement that took place on Wednesday at the Ministry of Economy was resolved without progress, representatives of the employers’ association and the unions met in a forum organized in Madrid, in which members of the the European Commission. There, from the CEOE it was recalled that the current blockage in which the definition of a salary agreement is found to deal with inflation does not prevent collective bargaining from advancing. In fact, they celebrated that so far this year they had closed renewals of agreements in different sectors in which salary increases were established. With this movement, the renewal of the Agreement for Employment and Collective Bargaining (AENC), expired since 2020, becomes even more complicated, and the tension between the social agents grows.

Until now, the employers’ refusal to sign a new AENC —a sheet of recommendations that has historically been protecting collective bargaining despite not being mandatory— was based on the rejection of salary review clauses. That is, at the end of each financial year and the three years over which the new pact would be projected (2022, 2023 and 2024), the percentages of increases are reviewed in accordance with inflation. And the inclusion of these salary safeguards is essential for the unions, since they consider that without them it is not guaranteed that the workers will not lose purchasing power at the end of the three-year period. The percentages of increases proposed by the centrals (and that do not squeak businessmen) are 3.5% for 2022, 2.5% in 2023 and 2% in 2024. So far this year, the salaries of agreement have grown by an average of 2.6%.

The reading made by the CEOE is that if collective bargaining progresses without a new AENC, and since this is not binding, its renewal does not seem essential. “We are open to negotiating at the confederal level, and our will continues to be to negotiate where it is necessary. In addition, everyone understands that a global salary pact serves to safeguard social peace, but without it it is being shown that collective bargaining is not left unprotected, ”says a source from the employers’ representative body.

The Gordian knot, therefore, remains tense, and, according to trade union and business sources consulted, there are no signs that it will unravel in the remainder of the year. For several reasons: the first, because according to the behavior that inflation is having in recent months, prices could end this year with an average increase of 8% (the total projected for the three years), and businessmen consider that adjusting wages on this basis would seriously compromise the survival of many businesses. And second, because Antonio Garamendi, president of the CEOE, is opting for re-election of the employers’ representative body —the elections are scheduled for November 23—, and certain sectoral employers’ associations have already shown him their dissatisfaction with the latest actions of the Ministry of Labor (the latest about capping food prices), and the continuing accusations by the unions about their lack of waistline.

The trump card that the centrals have to try to unbalance the balance of the negotiation in their favor has to do with the call for mobilizations in all those sectors (or companies) in which the renewal of the collective agreement is being negotiated. Both Unai Sordo, secretary general of the CC OO, and Pepe Álvarez, his counterpart at the UGT, have publicly announced their willingness to strain relations with the employers to force them to twist their arms. Both unions demand that at a time of inflationary crisis like the current one, the increase in costs is shared between employers and workers. In addition, they accuse the employers of having transferred the increase in the cost of raw materials and supplies to final prices.

The distrust that exists between the social agents themselves has led the unions to value that even if a path of wage growth and a renewal of the AENC could be agreed upon, some employers refuse to apply them when negotiating the agreements. A scenario that, according to the latest movements, is less and less hypothetical.

'Athena': Romain Gavras films the spark of a hypothetical civil war in France