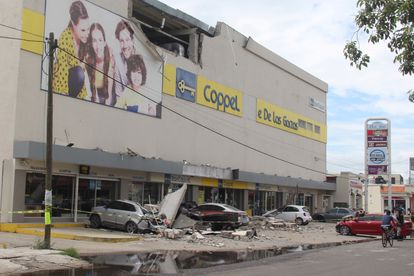 Vehicles damaged by the collapse of the facade of a department store during the earthquake of September 19, 2022, in Manzanillo, Colima State (Mexico). STRINGER (REUTERS)

The record of the damage caused by the 7.7-magnitude earthquake that shook Mexico last Monday continues to increase. The latest Civil Protection data indicates that the earthquake has affected seven states in the country and has left two dead in Manzanillo, in Colima, due to the collapse of two buildings.

The statement indicates that the most affected state has been Colima, a territory near the epicenter of the earthquake. The earthquake was detected 63 kilometers south of Coalcomán, in Michoacán, the second territory most affected by the tremors. Between the two States, damage has been recorded in about 245 buildings, 90% of the 272 damages recorded by Civil Protection in the evaluated territories. The remaining 10%, 27 buildings, have cracks and damage to the structure and some superficial damage.

The earthquake left 10 injured in Colima and Michoacán, nine and one respectively. In Jalisco, Aguascalientes, Mexico City, Nayarit and the State of Mexico, no deaths or injuries have been recorded from the earthquake.

The first tremor caused the plans and protocols to help the population to be activated, in addition to the damage assessment in the entities near the epicenter and in the Valley of Mexico. From the beginning of the earthquake until three in the morning on Tuesday, there have been 615 aftershocks of the earthquake, among which the report highlights one of 5.8 degrees as the largest.

The Armed Forces have mobilized 3,611 people to participate in the relief work, of which 3,051 belong to the Secretary of National Defense (Sedena), 410 to the National Guard and 150 to the Navy (Semar), which has provided three vehicles , an airplane and a helicopter.

The Secretary of Security indicates the implementation of the contact with the federal entities, of assistance, evacuation and evaluation plans and the reestablishment of energy and telecommunications services.

Because of home office: More shopping on the outskirts since Corona

Digital in education: The teaching staff should become more professional

The person in charge of the series 'Fácil' responds to the description of "Nazi" launched by the author of the novel: "Let him talk about the extraordinary amount of money he has received"