Falls in harvests in the dry land of 80%, reductions in cultivated areas of up to 90% or increases of more than 30% in the cost of feeding livestock. These are some of the most devastating effects that the countryside is suffering from extreme drought and prolonged heat waves. The Coordinator of Farmers and Ranchers Organizations (COAG) describes the situation as “critical” and asks the Government to urgently convene the Drought Roundtable to define a shock plan to alleviate the millionaire losses in the agricultural sector.

In the dry land, where water is the limiting factor, woody crops such as vineyards or olive groves are being affected in many areas of the country, which even suffer from fruit set problems or vegetative stops that also threaten future seasons’ harvests. “In the dry land we are practically not going to have any production, it is sad to see how the olive trees are,” says Antonio Román, a farmer from Jaen who exploits, as owner and tenant, more than a thousand dry land olive trees in the Las Villas region .

In irrigation, the situation is not much better. The important restrictions in the irrigation endowments in certain hydrographic basins, especially those of the Duero, Guadalquivir and Guadiana, have conditioned the crops. “The normal thing is to have an allocation of 1,500 cubic meters per hectare, but this year we have had 900 and next year there will only be water for permanent crops,” says Francisco Elvira, Secretary of Organization of COAG in Jaén. This organization predicts a national production of olive oil below one million tons, far from the average of 1.4 million or the 1.8 million that were produced not many years ago.

The lack of water has led to a drastic reduction in the area planted to crops such as rice or tomatoes. In Extremadura, the cultivable area of ​​rice has fallen by 90% (from 21,300 hectares last year to 2,100 this year), while the area planted with industrial tomatoes has fallen by almost 30% on average, although in areas of Seville the reduction rises to 50%. And, according to the report on the impact of the drought on agriculture prepared by the COAG, although the price of industrial tomatoes has risen by 24 euros per ton, this increase is not enough to offset the 30% rise in production costs. production. 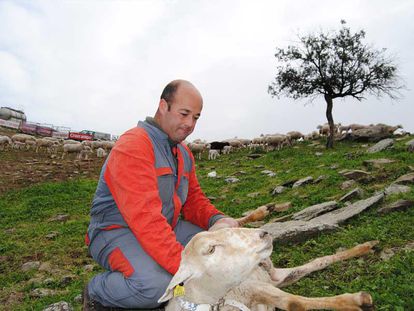 Antonio Punzano, rancher with a farm of goats and sheep in the Sierra de Segura de Jaén.Ginés Donaire

Livestock is another of the sectors hardest hit by the adverse weather. Antonio Punzano knows this well, a 47-year-old rancher who manages, together with his brother-in-law Manuel, a farm with 1,300 sheep and 100 goats in the Sierra de Segura in Jaén. “Since it hasn’t rained, there is no grass, which has forced us to have to buy 30,000 more kilos of cereals to feed animals and, on top of that, feed has doubled its price compared to last year,” emphasizes Punzano, who has spent his entire life dedicated to to extensive transhumant farming. And not even the aid established by the Government to sectors affected by the Russian invasion of Ukraine satisfies the farmers. For a farm like the one in Punzano, it is about 5,000 euros, “a figure that is totally insufficient to cover the losses,” he says.

In the case of poultry and pig farming, the increase in costs is mainly motivated by the increase in the electricity tariff. In addition, high temperatures have doubled mortality (up to 7%) and in fattening farms it is common that there is no refrigeration, which has meant greater difficulties for the animals to develop their cycle normally. A similar situation is experienced in beekeeping, where between 60% and 70% less harvest is expected due to the severe malnutrition of the hives due to the lack of rain.

Other farmers who are considering not harvesting their crops due to lack of profitability are cotton growers. In the province of Jaén there are more than 3,200 hectares of this crop, which have received 70% less water this year. In irrigated land, the gauging foresees a production of less than 1,000 kilos per hectare, but in dry land it is non-existent, which in turn prevents farmers from opting for aid for crops above 500 kilos per hectare. Given this, COAG has asked the Junta de Andalucía to activate the appropriate exceptions and not question the collection of aid attached to this crop.

In an attempt to mitigate the rise in production costs caused by the war in Ukraine, several communities have authorized cultivation on land that was idle and fallow. In Andalusia, more than 35,000 hectares have already been put into production, most of them with sunflowers and the rest with various cereals. However, the lack of water is leading to productions below 1,000 kilos per hectare.

In addition to the drought and prolonged heat waves, the field has suffered in recent months from other climatic adversities. From the frosts at the beginning of April to the haze and the Saharan dust. But forest fires are also affecting many producing areas, burning crops to the desperation of some farmers who are experiencing one of the worst years.