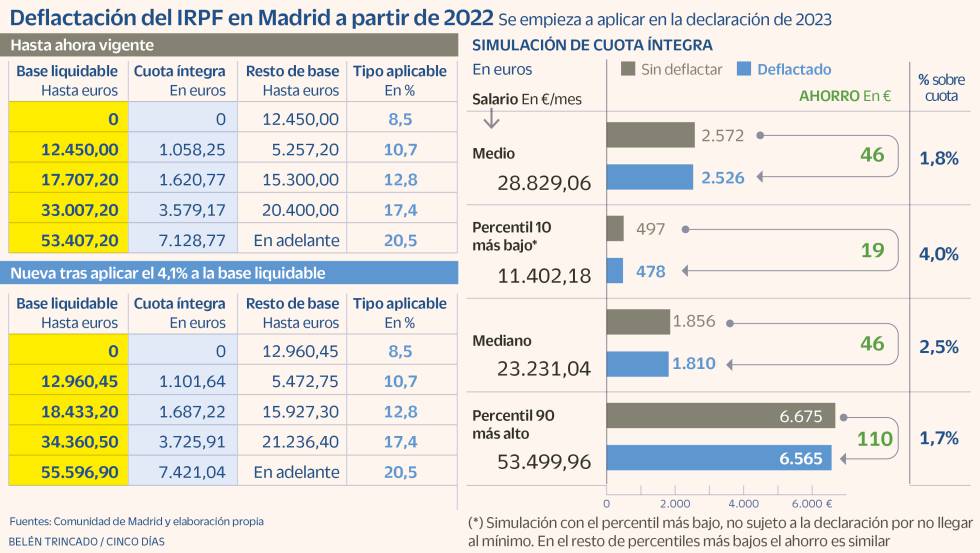 The deflation of the personal income tax (IRPF) that the Community of Madrid will carry out from next year will mean an annual saving on the full amount of 20 euros for the lowest incomes and 110 euros for the who are in the highest income brackets. On average, each taxpayer will stop paying 46 euros in taxes. To all these amounts should be added, in each case, the corresponding deductions for children, for dependent ascendants or for disability, which will also be increased due to inflation.

The region governed by Isabel Díaz Ayuso announced two weeks ago that it will advance the deflation to 2022 – initially designed for 2023 – to relieve taxpayers as soon as possible in the face of the general rise in prices. Specifically, as stated in the draft bill to which this newspaper has had access, personal income tax rates will be deflated by 4.1%, “which is a percentage equivalent to the average percentage of salary increase according to cost statistics of the second quarter of 2022 of the National Institute of Statistics”.

The objective is that the wage increases produced to alleviate the inflationary pressure do not result in more taxes, either due to an increase in the tax base or due to a jump in the tax scale, which in turn implies a higher effective average rate . It is the well-known increase in cold taxation because it does not require any tax reform and occurs naturally.

The 4.1% rate, continues the text, “will be applied to all sections, and in addition, the personal and family minimums will also be deflated, in such a way that the tax-free section that each citizen has will be updated so that neither be affected by these wage increases. The taxpayer’s minimum, specifically, will amount to 5,777 euros.

In short, the update promoted by Madrid will modify the regional scale as a whole and the vast majority of deductions. Only those corresponding to large families are left out, since the minimum for a third descendant (4,400 euros) and for a fourth and subsequent descendants (4,950 euros) is already at the legal maximum possible.

With these changes, an average single taxpayer in the Community of Madrid, without dependent ascendants and without children, with an annual remuneration of around 28,830 euros in 2020 according to INE data, will go from a full quota of 2,572 euros to another of 2,526. The savings obtained is 46 euros, a figure similar to the benefit that Madrid residents who receive the median or more usual salary will obtain (set at 23,230 euros, also according to Statistics).

For its part, the savings for the lowest incomes will be about 20 euros. The taxpayer with the lowest percentile salary in the region (11,402 euros according to the INE) is exempt from the declaration for not reaching the necessary minimum. In this case, however, the fee would go from 497 euros to 478, almost 20 euros less. It is a figure similar to the savings that they will receive similar remunerations, somewhat higher, which will be subject to the declaration. For its part, the taxpayer who is located in the wealthiest sections (almost 53,500 euros according to the INE) will stop paying 110 euros.

It should be remembered, however, that if these gross figures are compared with each full installment, the savings for the lowest incomes will be 4%, while for the most opulent it will be reduced to 1.7%.

According to the Community of Madrid in the draft bill, deflation “will prevent families from suffering a greater tax burden and will help taxpayers to withstand price escalation” in a year that will close, according to the main forecasts, with an advance annual CPI that will be around 8%.