The DART probe collides with Dimorfo to try to divert it 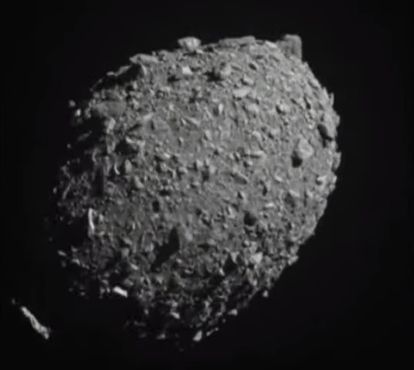 The Dimorphic asteroid photographed by the DART probe seconds before impact.NASA

“We have impact!” Those responsible for the DART space mission today received with joy the loss of the signal emitted by the probe. The ship has achieved its objective of colliding head-on and at more than 20,000 kilometers per hour against the Dimorphic asteroid to try to divert it. This is the first space mission that attempts to protect Earth from future asteroids that could wipe out entire cities.

During its last half hour of life, the DART camera has photographed the Dimorph asteroid once every second. At first it was a tiny point of light, but the last images before the crash already showed the body in great detail, covered in rocks and shadows. Afterwards, the signal from the ship was lost, which means that it has disintegrated fulfilling its first objective: hitting Dimorfo.

The impact was expected for 1:14 on Tuesday, Spanish peninsular time. The probe has been navigating for the past four hours using its automatic guidance system, which was directing it towards a head-on collision in the center of Dimorpho, 160 meters in diameter. The collision has happened about 11 million kilometers from Earth. The impact has been followed almost live – the signal takes 38 seconds to arrive – from the control center of the Institute of Applied Physics at Johns Hopkins University, which has developed DART.

So far more than 95% of all asteroids larger than one kilometer in diameter are known; capable of causing a planetary catastrophe similar to the one that caused the extinction of the dinosaurs 66 million years ago. Instead, only 40% of the bodies of 140 meters or more have been discovered, capable of generating an explosion similar to a nuclear bomb and creating an impact crater two kilometers in diameter. There are thousands of these bodies whose trajectory could intersect with the Earth’s orbit that have not yet been located.

The most feasible way to avoid such an impact is to use a probe as a projectile to divert its course. DART aims to become the first space mission to modify the trajectory of a celestial body. Dimorfo is the moon of the asteroid Didymus, 780 meters in diameter. The satellite circles its companion once every 11.9 hours. DART weighs half a ton, while its target is millions of times more massive. The objective is that after the impact, Dimorfo’s orbit is shortened in a few minutes or, what is the same, in about 15 meters.

A large network of space and ground telescopes will observe both asteroids before, during and after the impact. It is expected that in the hours, days or weeks after the crash they will be able to confirm if Dimorfo has deviated and how much.

The only close witness to today’s collision was LICIACube, a small satellite developed by the Italian Space Agency. A few days ago this artifact separated from DART and has followed it some 1,000 kilometers away. The satellite carries two cameras —which respond to the initials LUKE and LEIA— that will be able to capture the trail raised by DART and the crater it has opened in Dimorfo.

The success of DART is only the first step towards a future planetary protection system. The idea is that all the data collected by the suicide probe during its approach, by LICIACube and by all the astronomical observatories that collaborate with the mission, will serve to perfect the impact models. A fundamental part of this process will be provided by the future Hera mission of the European Space Agency, which will take off in 2024 and will reach the Dimorpho-Dídimo system two years later. It will be the first that can measure with great precision the mass, composition and internal structure of these two asteroids and will carry out a detailed three-dimensional reconstruction of the crater left by DART. The next step would be to already have a reliable model capable of determining what type of probe could deflect a future threatening asteroid based on its size and mass and the time available before it hits Earth.