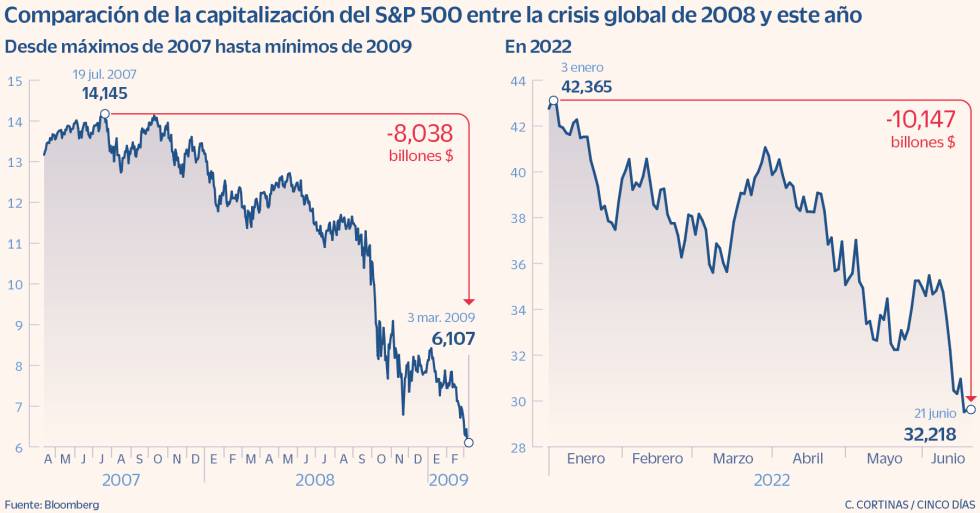 The stock market crisis unleashed by out-of-control inflation has already caused a destruction of value in the United States Stock Market greater than that caused by the previous financial crisis, in 2008. Since the maximum that the S&P 500 index registered on January 3 of this year, North American equities have lost 10.14 billion dollars of capitalization (9.6 billion euros). In the previous bear market, the maximum value destruction (between July 2007 and March 2009) was $8.04 trillion.

To some extent, it is normal that more recent crises destroy more value than older ones. Companies are earning more and more and are worth more, since it is logical that falls have a greater value in absolute terms. In fact, the Lehman Brothers crisis led to a maximum collapse of the S&P 500 (which brings together the largest companies in the US) of 56%while on this occasion the North American stock market only shows a correction of 23%.

If in 2007 the origin of the crisis was purely financial, with an over-indebted US economy (remember subprime mortgages), this time the main cause of the correction has been the reaction of the US Federal Reserve to raise interest rates and try to control prices. With inflation at 40-year highs, the move was more than necessary.

The previous bear market lasted for 20 months. It was in March 2009 when the S&P 500 bottomed out and began to climb, later to sign the longest bull run in its history. This time, the correction of the US stock market has been very abrupt. The second quarter of the S&P is on track to become the second worst in history, with a drop of almost 19%. Worst of all, it is not yet known whether the market has bottomed out.

Another of the great differences between this crisis and the previous one is that in that crisis, diversified investors were able to cushion stock market declines with their fixed-income positions. However, this time the debt markets are experiencing the worst start to the year in their history. Now, with the latest rate hikes launched by the Federal Reserve, some fixed income funds have already started to deliver positive returns.

Despite the fact that the US economy still shows signs of strength (with full employment and high growth), more and more experts predict that there will be a sharp slowdown in the third and fourth quarters of the year. The investment bank Nomura considers that by the end of the year the US would already be in a recession. The Stock Market, as has always happened, does nothing but anticipate and discount future events. The Fed needed a recession to tackle inflation, and it’s going to have one. The market knows it.

The first companies that began to notice the beginning of the bear market were the technology companies. Their valuations had been greatly inflated after several years of rock-bottom interest rates. Since their results depend heavily on forecasts of future cash flows, when these flows are discounted at cheap rates, companies are worth more. Now, when clouds begin to gather on the horizon and the price of money skyrockets, future money loses value. And with it, the present valuations.

After the corrections in the technology sector, falls began to reach the rest of the companies. Only a handful of energy and oil firms escape declines.

In the stock markets of other economies, the destruction of value has not been as strong as that which occurred in 2008. Thus, in the Stoxx 600 index, which brings together the largest European companies, three billion dollars of capitalization, while in the previous crisis it lost 5.5 billion. In the MSCI World, which collects the 3,500 largest companies in the world, the correction was 20.5 billion dollars, compared to the 16.7 billion it has lost this year.

The crockery that is flying out of the Maisons du Monde stores: it is irresistible