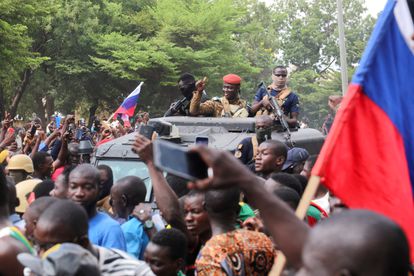 Captain Ibrahim Traoré, the new president of Burkina Faso, addresses the headquarters of RTB television this Sunday, in Ouagadougou, to the cheers of thousands of citizens, some of whom waved Russian flags. VINCENT BADO (REUTERS)

The coup d’état in Burkina Faso, carried out this Friday by a group of soldiers led by Captain Ibrahim Traoré, ended up being imposed this Sunday after Lieutenant Colonel Paul-Henri Sandaogo Damiba, until now president of the country, ended up giving in and tendering his resignation. There have been 48 hours of tension and gunfire in Ouagadougou, the country’s capital, and of negotiations within the Army and with civil and religious mediators. As was the case in recent coups in neighboring Mali, strong anti-French sentiment and the shadow of growing Russian influence have been very present on the streets: the military putschists stated: “We are determined to go to other willing partners to help us in our fight against terrorism”, in a veiled reference to Russia versus France. There were attacks on French institutions present in the country.

“The situation is under control,” said noncommissioned officer Kiswendsida Farouk Azaria Sorgho, spokesman for the coup plotters, in a televised message this Sunday morning. A few hours later, the air borders were reopened. By then, Lieutenant Colonel Damiba, who had come to power last January also through a coup d’état, had already signed his resignation after Captain Traoré accepted his conditions: the continuity of ongoing military operations, security guarantees for him and his loyal forces and respect for the commitments made with Cedeao (Economic Community of West African States), in reference to the holding of elections in 2024. Traoré himself, in an interview with Radio Omega, assured that he would not intends to stay in power and that the transition could be even shorter.

The trigger for the coup d’état, as the rebels themselves have declared, has been the lack of means and the logistical problems faced by the Burkinabe military in trying to stop the advance of armed jihadist groups, linked to Al Qaeda and the Islamic State. , which control 40% of the national territory, especially in rural areas, and subject the population to robberies, blackmail, extortion and massacres. With some 8,000 deaths since 2015 and almost two million people fleeing their homes, the security crisis is enormous. The failure of the French-led intervention in the region to tackle this problem feeds the growing anti-French sentiment, which was already evident with the blockade of a French military convoy by citizens in both Burkina and Niger last November.

In this context, Russia has been gaining influence throughout the region. In neighboring Mali, where two coups d’état also brought Colonel Assimi Goïta to the presidency, the military authorities have severed their relations with France, which has withdrawn all its troops from the country, and since the end of 2021 they have openly collaborated with Russia as a new anti-terror partner. Hundreds of instructors and mercenaries from the private company Wagner operate in Mali, as was already the case in the Central African Republic, Libya or Mozambique. Lieutenant Colonel Damiba had been reluctant to follow this path, but the new Burkinabe authorities have already shown their intention to have new allies to confront jihadism, they said in a statement.

After the incidents on Saturday, in which supporters of the coup attacked the French Embassy and the headquarters of the French Institute in Ouagadougou and Bobo-Dioulasso with stones and sticks and tried to set them on fire, this Sunday the rebels have tried to lower the tension.“ We invite you to go about your business freely and to avoid any acts of violence and vandalism that could tarnish the efforts made since the night of September 30, 2022,” added Sorgho. In the morning, the French representation again suffered harassment from dozens of young people who were dispersed by tear gas fired from inside.

Moments later, Captain Traoré took his first mass bath when he went to the RTB television headquarters with his soldiers to read the statement, which he finally delegated to his spokesman. Thousands of citizens applauded the passage of the armored vehicle from which the new strongman of Burkina Faso greeted the crowd, among which Russian flags could be seen waving as in other concentrations this weekend, and shouts against France were heard again, eyewitnesses assure by WhatsApp.

The attacks on French headquarters began on Saturday after the coup plotters assured in a statement read on television that former President Damiba was taking refuge in the French military base of Kamboinsin, on the outskirts of Ouagadougou, preparing “a counteroffensive” to make against the coup. Moments later, the French Ministry of Foreign Affairs denied that Damiba had been welcomed at that base or anywhere else, which did not stop the anger of the protesters. The former president himself made public a statement to deny it as well.