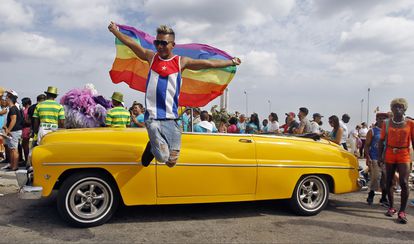 A man during a protest against homophobia in Havana, Cuba, in May 2017. Ernesto Mastrascusa (LatinContent via Getty Images)

More than eight million Cubans are called to vote this Sunday for a new and advanced Family Code, which includes aspects such as equal marriage and the right of adoption by same-sex couples, taboo for decades in Cuba, in a controversial referendum called by the Government that its detractors and supporters have turned almost into a plebiscite to express themselves in favor or against the current Cuban socialist system.

The new legislative package, which includes “supportive gestation” (surrogacy), the protection of children’s rights, “parental responsibility” to replace parental authority and addresses aspects such as gender violence, represents a significant step ahead in a country that for years punished and marginalized homosexuality, but the debate has been contaminated by political considerations that go beyond the specific contents of the new law.

The referendum is the third to be held on the island since 1959 -the previous two were called to approve the 1976 and 2019 Constitutions-, and the first to endorse a specific legal norm. The new Family Code recognizes rights for which the LGTBIQ+ collective has been fighting for decades and, according to prominent jurists, it is a modern law that is at the forefront of the most advanced in the world, but the vote takes place in a highly polarized and rarefied environment, marked by the very serious economic crisis that the country is going through and the hopelessness of the population, which has led to an unprecedented exodus.

In recent weeks, even members of the LGTBIQ+ minority and people who have historically defended the extension of rights granted by the new code, have expressed on social networks that they will vote against the legislation as punishment and as a manifestation of rejection of the Government, since that there is little chance of doing so.

The authorities, who have sponsored the norm and promoted its public debate for months, have carried out an omnipresent and aggressive campaign for yes in the official media, affirming that it is a guarantee legislation that “promotes love and affections” . On the eve of the vote, the country’s president, Miguel Díaz-Canel, stated that voting in favor was also “saying yes for unity, for the revolution, for socialism and yes for Cuba,” further encouraging the feeling that in the referendum, more than the simple approval of a legal norm is decided, and that it is also a show of support for the Government.

Television and radio have not granted spaces to the defenders of the no to argue their position, although the Catholic Church and other Christian denominations have expressed their disagreements in various ways. There is also the perception that there are Orthodox sectors, within or close to the officialdom, that do not understand or welcome the freedoms that the Government now wants to grant. In the street, meanwhile, there are not a few interviewees who openly say that they will abstain or vote no, despite being in favor of expanding the rights of a minority that for decades was crushed by its sexual orientation and gender identity, and that for this reason she was even forced to serve internment sentences in forced labor camps in the sixties, the famous UMAP, of unfortunate memory.

This paradox has exacerbated the debate, to the point that few discuss whether the legislation is good or bad, or whether it is for or against same-sex marriage, “solidarity gestation” or the right of adoption by same-sex couples. , while criticism of the Government is growing for how they have handled and presented the new code and the referendum to approve it.

The objections are many and range from why the Government has decided to submit to a binding vote a legal norm that pronounces on universal rights and of a minority that has been historically marginalized, when no other law has gone through a similar process – not even the new Penal Code, recently approved by Parliament, which toughens the penal framework against manifestations of dissent.

It is also criticized that the Government has never apologized for the UMAP, and that the Family Code has already been published in the Official Gazette when the population has not even spoken, and some even affirm that the decision of the authorities to promote now, in the midst of one of the biggest crises in the country, advanced legislation like this is a simple “facelift” to give a false democratic image. In this highly politicized context, Cubans must vote this Sunday yes or no to a relevant legal norm.

In view of the heated atmosphere, and the possibility that by expressing their rejection of the Government, many will vote against positive legislation that has taken a long time to arrive, relevant sociologists, historians, jurists and psychologists, many of them critical of the Government, have wanted to present their criteria, contributing to the debate.

One of the most shared opinions is that of the psychologist Carolina de la Torre, author of the book Benjamin, when dying is more sensible than waiting, a harsh testimony about the death of her brother, who committed suicide in the sixties after being hospitalized in the UMAP camps for his homosexuality. De la Torre assures that he has “tried, all the time, to face this crossroads thinking about the good that can be done for others and not about grudges and revenge that will do little to help those who now suffer the suffering” that his brother, his family and herself, before they had to endure.

“Both as a sufferer of family trauma, as well as as a psychologist and teacher, who for more than 50 years have seen and helped others in similar anguish and humiliation, I cannot think of a better way to honor my dead other than supporting any law that grants to others what my brother could not receive”

De la Torre points out that “the biggest obstacle has not been making a decision, but trying to face the political dilemma, avoiding a punishment vote that would only contribute to perpetuating the suffering of many by avenging what we had to go through.” On the other hand, he considers that “the campaign that reinforces support for the referendum as support for the government and the Communist Party, makes the same mistake as those who have fought for their rights and do not see this code as an achievement of their struggles, but as a failure against the government they do not support.

Along the same lines, the journalist and director of the Gibara alternative film festival, Sergio Benvenuto Solas, commented on the eve of the referendum: “Yes would be an achievement of civil society and justice. He should never have gone to a referendum. Let’s focus on its benefits and ignore the political component that corrodes this vote from the extremes.”

On Sunday morning, after voting in his electoral college, Miguel Díaz-Canel confirmed the tensions surrounding the referendum by admitting that many people can vote no to the code as a way of protesting and expressing their disagreement with the Government in the face of the difficult situation that crosses the country, and I think that this position is “legitimate”. At 2 in the afternoon, the participation of Cubans with the right to vote was around 55% of the census, 20 points less than in the 2019 constitutional consultation, according to the National Electoral Commission. A high abstention given the peculiarities of Cuba and a trend that, if confirmed, could be one of the protagonists of the day.

With this turbulent sea in the background and a galloping crisis that has turned survival in Cuba into an ordeal, the vote will take place this Sunday in 23,000 polling stations. The result will be announced on Monday. If the legislation is approved, we will soon see the first gay weddings on the island, something unthinkable for many until recently. It would undoubtedly be a historic event, given the homophobic background of the Cuban revolution. As would a triumph of no at these times of crossroads.