San Chin Choon, the executive director of Leno Sdn Bhd, the Malaysian company at the center of the alleged scam by businessmen Alberto Luceño and Luis Medina of the Madrid City Council in the so-called case of the masks, has sent Judge Adolfo Carretero a document in which answers the questions asked by the Anti-Corruption Prosecutor’s Office. In the interrogation, the Malaysian businessman admits that he himself or representatives of his company signed all the documents. This key witness recognizes the veracity of the same and, according to judicial sources, in this way, the accusation of documentary falsehood that the Public Ministry imputes to the investigated Luceño and Medina vanishes.

Anticorruption investigates the veracity of the contracts and documents with the signature of the Malaysian, who in principle paid the commissions to the Spanish businessmen Luceño and Medina. In the rogatory commission, to which OKDIARIO has had access, the Prosecutor’s Office asks San Chin Choon if he has signed the documents in the case. The Malay replies bluntly: “I have signed all the documents.” And he adds that there are several signatures in the company and all of them correspond to the company. «For example, one that I attach below. One is the original signature that I use on contracts and the other is a stamped signature that I generally use for other documents like NCNDA, IMPFA, LOI, ICPO… etc. », he asserts. 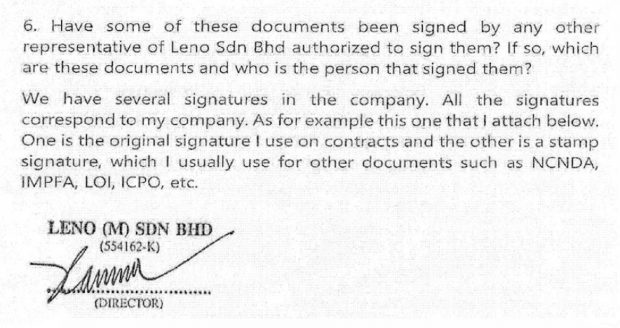 Interrogation of the Anti-Corruption Prosecutor’s Office to the Malaysian businessman in the ‘case of the masks’.

At all times, the witness recognizes Luceño and Medina as Leno’s exclusive agents. And he explains that some documents were signed in 2018 since his commercial relationship with Luceño began a few years ago, before the pandemic caused by Covid-19, after signing an operation for the sale of meat products. Other essential documents for the sale of sanitary material to the Madrid city council, he explains, were signed “through the agent Chang Beng, who was the channel for the incoming and outgoing documentation for both parties.” For example, he adds, “the contracts were sent to Mr. Alberto Luceño, he sent them to me signed, I also signed them and returned them to Mr. Chang Beng who sent them back to Mr. Luceño and so on in all the cases”.

The Public Ministry affects the role of external agents of the businessman Luceño and the Duke of Feria. “Is it true that Luceño and Medina Abascal have been the exclusive agents of Leno Sdn Bhd for the importation of medical devices from Asian markets since September 2018 (attached document No.9?”, asks the Prosecutor’s Office.

The executive director of Leno Sdn Bhd has no doubts about this and replies: “Yes, it is true that Mr. Alberto Luceño has been an exclusive agent together with Mr. Chang Beng since August 2018. At which time we had a meeting to work internationally with products such as chicken, pork, beef, lamb, sugar, milk, oil, health products, soybeans, etc.” He adds: “It is also true that I have appointed Mr. Luis Medina as agent, but not on the date that he appears, because when we used a draft, we forgot to update it.”

The Anti-Corruption Prosecutor’s Office issued a rogatory letter protected by the United Nations Convention against Corruption, signed by both Spain and Malaysia, in which it asked the authorities of this country to interrogate Chin Choon as a witness. The interrogation should begin by verifying if, in fact, this person knows Luceño and Medina, to later delve into the verification of the entire operation.

The request was urgent, but the interrogation never reached Spain. Now, San Chin Choon explains that he responded to those questions in a timely manner. However, the Malaysian authorities did not send the answers to the Spanish. For this reason, the witness sends said questionnaire prepared by the Prosecutor’s Office to the head of the Investigating Court number 47 of Madrid.

‘Case of the masks’

During the first weeks of the pandemic, in which the Government decreed a state of alarm, the businessmen Luis Medina and Alberto Luceño “acting in common agreement and with the aim of obtaining an exaggerated and unjustified economic benefit, offered the Madrid City Council the possibility to get large consignments of medical supplies manufactured in China,” according to the Prosecutor’s Office.

Luceño presented himself as “an expert in importing products from the Asian market, with factories in China at his disposal, and as the exclusive agent of the Malaysian company Leno, through which the import was to be carried out.” Also, he assured to act moved by the desire to collaborate in the fight against the pandemic. But for the Prosecutor’s Office, “in reality, neither had significant experience in import business nor did it have factories in China, nor was he the exclusive agent of any Malaysian company nor was he acting out of any altruistic intention’.

In the operations, according to the complaint, Luis Medina and Alberto Luceño artificially inflated the price of the masks by 148% of their real value in order to obtain a net profit of $4,000,000. In the case of the nitrile gloves, which were sold at 426% of the real price of the product, the alleged scammers claimed that they were “gloves 40 mm long, of high quality and that covered most of the arm” . However, the gloves that were received on April 8, 2020 were “poor quality and wrist only” gloves.

However, the executive director of Leno Sdn Bhd assures in this statement, which OKDIARIO reveals, that they were the exclusive agents of his company and added that the price for which these products were sold would not have changed without the agents Luceño and Medina. they would have intervened. Said work, he explains, is a cost assumed by the Malaysian company since “without the intermediation of these professionals the operation would not have been possible.”