The British royal house has published this Saturday on their social networks the first photo of the tomb of Elizabeth II, five days after being buried on September 19 at a state funeral held in London’s Westminster Abbey with 2,000 guests. The remains of the queen, who spent 70 years on the throne, now rest next to those of her father George VI of her in Windsor Castle. A point and end to a mourning that lasted 11 days. Elizabeth II died on September 8 in Balmoral (Scotland), which was one of her favorite castles. Her mortal remains would later travel from Scotland to London for a final and massive goodbye, which had the United Kingdom and the entire Commonwealth plunged into grief at having lost what has been a symbol for them for more than half a century.

The slab of the tomb, installed in the chapel of St. George, which was previously dedicated to his father and the Queen Mother, has been replaced by an engraving in memory of Elizabeth II, her parents and her husband, the Duke of Edinburgh -deceased in April 2021—, along with a metal star of the Order of the Garter, the most important cavalry in the United Kingdom.

In the released photo of his burial place, you can read the silk-screened words (they are inscriptions in gold) on the stone that say: George VI 1895-1952 / Elizabeth 1900-2002 in the two upper lines, followed by the insignia of the Order of the Garter and the inscription Elizabeth II 1926-2022 / Philip 1921-2021 on the bottom two lines. . The previous slab only had the names of George VI and the Queen Mother in gold letters. The ashes of Princess Margarita, sister of Elizabeth II, also rest here, however her name does not appear on the inscription.

The block is made of hand-carved Belgian black marble, while the wreaths surrounding the plaque are from the monarch’s family and were displayed next to the coffin during her burial service on Monday, September 19. as reported by Reuters. That was an intimate ceremony, in which only her closest family was present and of which there are no images. Buckingham Palace called it a “deeply personal family occasion.” 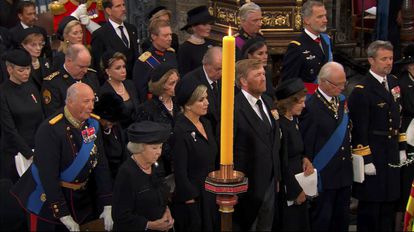 Felipe VI and Queen Letizia, together with the emeritus kings, attend the state funeral of Elizabeth II, this Monday at Westminster Abbey. It is the first image of the four kings together for two years.EFE 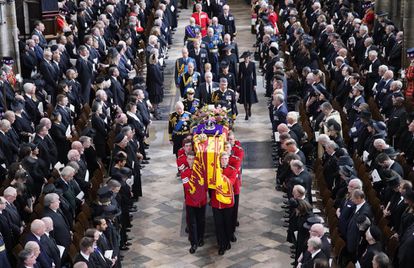 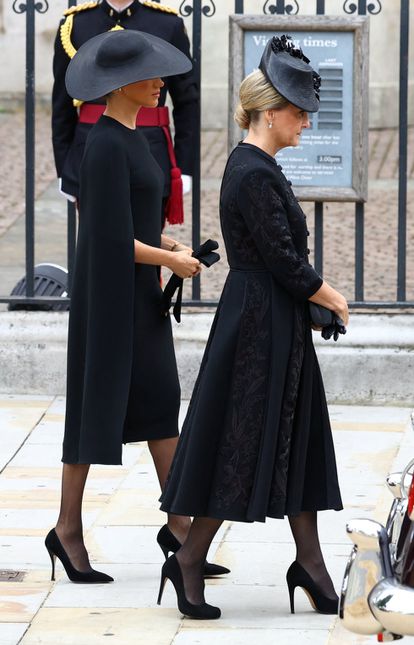 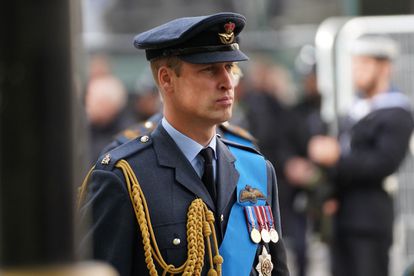 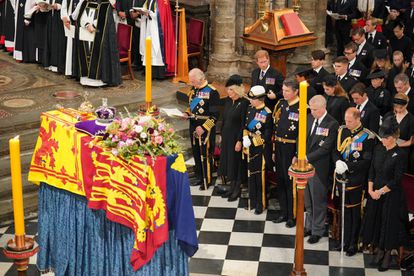 The British royal family before the coffin of Queen Elizabeth.Getty Images The coffin with the remains of the monarch enters Westminster Abbey, with the Imperial State Crown.Getty Images 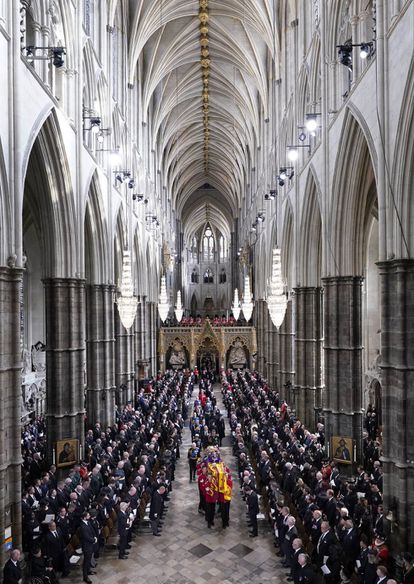 General view of the state funeral at Westminster Abbey, attended by royal houses and leaders from around the world.Getty Images 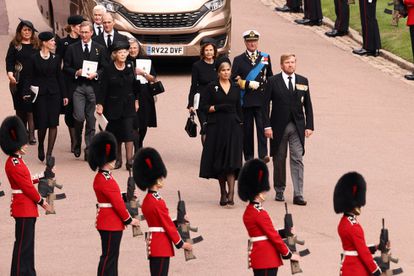 The royal families of Sweden and the Netherlands arrive at St George’s Chapel at Windsor Castle.Getty Images 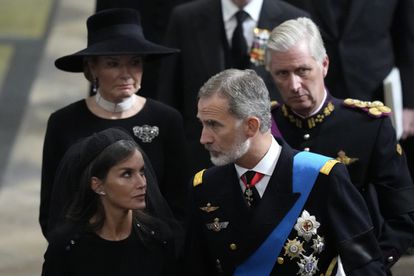 The kings of Spain, Felipe VI and Letizia, at the state funeral.Getty Images 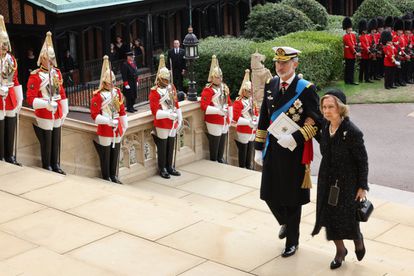 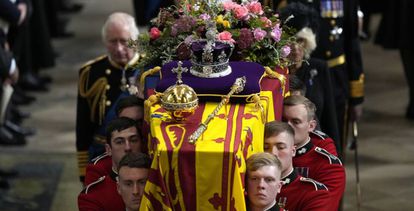 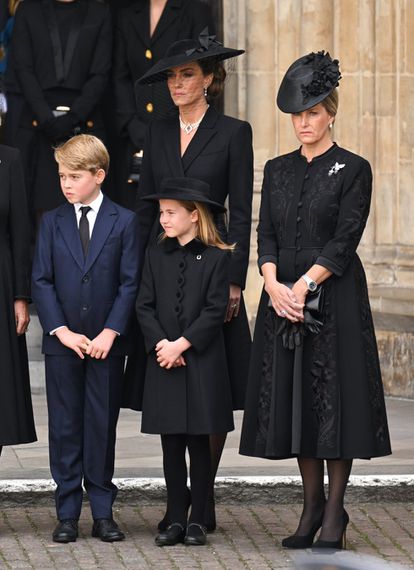 The Princess of Wales, Kate Middleton, Prince George and Princess Charlotte, with Sophie, the Countess of Wessex.Getty Images 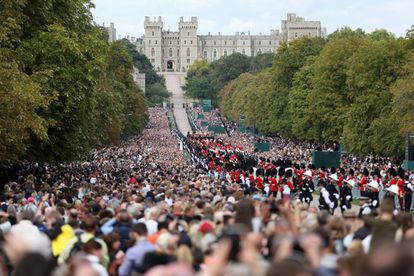 Thousands of people bid farewell to the monarch at the entrance to Windsor Castle, where the world’s longest-living queen will rest forever.Getty Images

A moment that the family surely needed, after the 11-day mediatic funeral that first toured Scotland, then went to London, where the English were able to say goodbye to the queen for four days and four nights in the burning chapel that was installed in the Palace of Westminster, until concluding in a state funeral in the abbey attended by some 2,000 people, including leaders and kings from around the world. After the religious service, the funeral procession began in which the members of the royal family were accompanying the coffin of Elizabeth II to Wellington Arch, where she finally traveled by car to Windsor Castle. After walking five times behind his mother’s coffin, Carlos III is mourning seven more days, according to the magazine ¡Hola!

The queen’s chapel will begin to be visited from next September 29, according to various agencies, in what is expected to be a pilgrimage site for all those who admired a queen who is now part of the history of the modern world.

Windsor, a place closely linked to the British royal family

The choice of this site for his mortal remains has not been trivial. St. George’s Chapel is where the remains of most of the kings and queens of British history are found—since Henry VII, who was buried there in the 16th century. Windsor is also the site of the Order of the Garter masses and the royal family’s favorite venue for baptisms, weddings and burials. In addition, the castle itself has played a very important role in the life of Elizabeth II, since due to her proximity to London it was where she spent her weekends for years. Here she suffered the fateful fire of 1992 that affected a part of the fortress, and also the home that served as a shelter with her husband in times of pandemic. In addition, the town of Windsor is from this year the official residence of the new princes of Wales, William of England and Kate Middleton, who moved to this enclave to be closer to Elizabeth II.