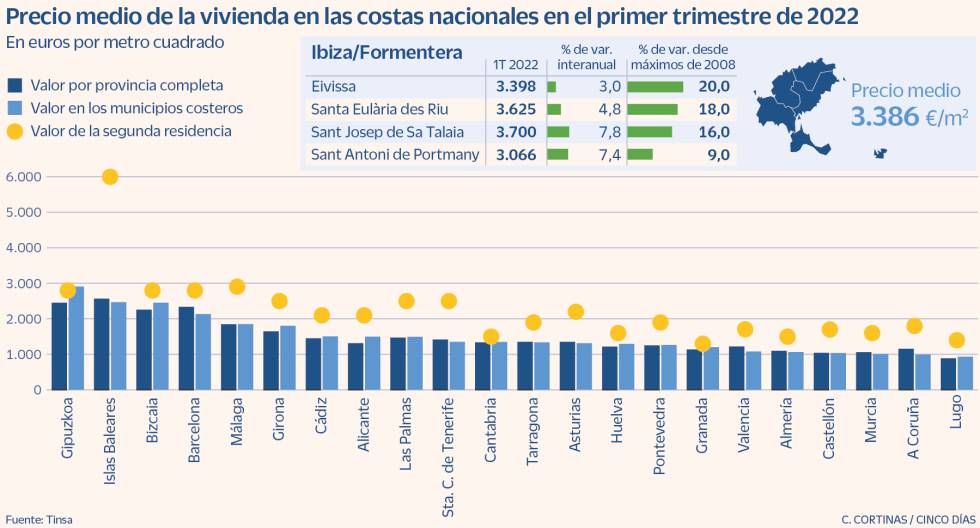 The average price of homes in Ibiza points to an “overheating scenario”, with values ​​higher than those of the real estate boom. That is one of the conclusions reached in the latest Tinsa report, which analyzes the evolution of the value of homes on the coast during 2022. It is, according to the appraiser, the only area in Spain that generates alarm due to levels it has reached, although a generalized year-on-year rise of 4.2% is observed in all homes on the coast during the first quarter of the year.

The city of Ibiza, for example, already exceeds the maximum price of 2008 by 20%, with a value per square meter of 3,398 euros. In Santa Eulalia the cost between January and March was 3,625, 18% more than 14 years ago. The situation is repeated in Sant Josep de sa Talia and Sant Antoni de Portmany, other towns on the island. The scenario worsens when the holiday home market is analyzed in detail, since in Ibiza they are 300% more expensive than first residences, according to data from the appraiser.

Usually, The Balearic Islands have the largest difference in prices between both types of housing. Here a second home is worth an average of 90% more than the average in the municipality, when the most common is that the difference is between 30% and 60%. To buy a multi-family house in Mallorca, a family must pay an average of 5,000 euros per square meter, as in Ibiza and Formentera. The single-family houses become a real luxury, with figures that reach 10,000 euros.

In general, the coastal market has been reactivated after the slowdown in 2020 imposed by the pandemic. Half of the areas have recovered the activity levels of 2019 and homes on the islands have been revalued, exceeding the pre-pandemic price by 16%. In the first quarter of the year, the value of vacation homes nationwide was on average 2,400 euros per square meter in Spain.

The vast majority (86%) of the municipalities analyzed registered annual increases between January and March, with Nigrán, in Pontevedra, at the head. In any case, it is not among the most expensive regions in Spain, which are concentrated in San Sebastian, Barcelona and, of course, Ibiza. At the extreme is Berja, in Almería, Nules and Almassora, in Castellón, or Carballo, in A Coruña. In all these areas the price is below 850 euros.

The report highlights that during the first months of 2022 there has been an upward trend in the indicators of sales and mortgages. Nevertheless, Given the persistent inflation and the reduction in growth expectations, some signs of a slowdown in the real estate market have begun to be registered. Tinsa highlights the volume of new mortgage concessions, which “could be reflecting a greater caution of both demand and financial institutions.”

Nonetheless, the slowdown does not yet seem to be reflected in vacation homes that are on the coast, because there the demand has continued to show a generalized dynamism in which sales by Spaniards prevail. With a 46% uptick in the past year, they have far exceeded the pre-pandemic level of transactions. The demand by foreigners has also increased, although more tenuously: 16% compared to 2020.

The coastlines with increased business activity in the last year they are located in Alicante and Malaga, followed by Barcelona, ​​although the coastal market of the latter capital is far behind the primary residence market. Valencia, the Balearic Islands and Cádiz also have coastlines with a very active market, according to Tinsa.

Compression garments in pregnancy why they are so important