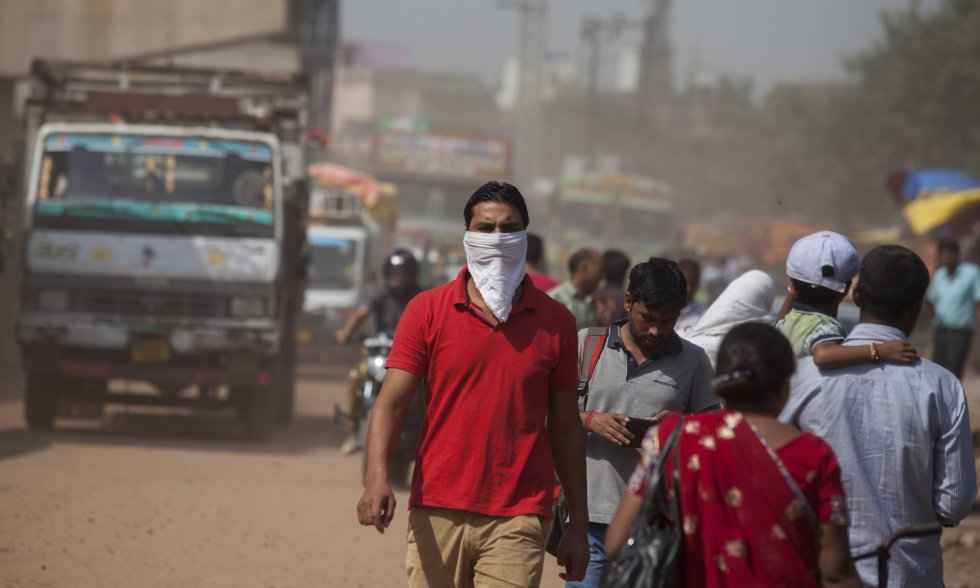 The camera advances slowly and rests for several seconds, and even a few minutes, on one of the interviewees, an inhabitant, like so many others, of the New Delhi megapolis, in India. The person confesses that he used to think that rivers were either black or white. He did not know any other reality than the dirty and toxic water, foamy, but not because of the soap that floats, but because of the waste dumped year after year by industries without conscience. The shocking testimony of climate change in India opens, on October 5, the eighth edition of the Another Way film festival, in Madrid, the fall cinephile event that brings us closer to the cinema that speaks of sustainable progress.

Invisible Demons is the latest work by Indian filmmaker Rahul Jain, who rose to fame for his documentary Machines (2016). We talked about him in this same blog in the post God has given us hands to work, a feature film in which he denounced labor exploitation in the textile factories of India.

The film, which premieres in Spain within the framework of the festival, stars another injustice, the climatic one. And this one is more difficult to define: there are no exploiters to point fingers at, on the one hand, and exploited on the other. The entire country as a whole and New Delhi, in particular, are victims of world economic development and the pollution that it entails on a global scale. Pollution knows no borders.

Each one is a victim and at the same time an executioner. The country’s capital wakes up often covered in smog, an anglicism that serves to define a new meteorological concept resulting from modernity: fog tinged with pollution. The logical thing would be to try to improve the environment and to do so suddenly park the car and the motorcycle, but how can we ask that developing country to abandon the car and the motorcycle, we who still use and abuse fossil fuels today? ? How to deprive it of the economic growth that is associated with it?

Jain allows the different citizens to express themselves freely on camera and only occasionally intervenes to make a comment. A resigned man complains about the higher temperatures each year and that air conditioning is a luxury only available to the rich. On the screen, images already seen decades ago, but which are, sadly, still current: children digging in urban dumps or doing stunts between two cars in a traffic jam to arouse the compassion of the driver and earn a few rupees.

I tell myself that decades go by and India seems unable to eradicate the extreme poverty in which it is submerged despite the growing number of millionaires and the country’s economic growth. To the difficulty of access to food, decent work and education, the disastrous effects of climate change have been added in recent years. Unpredictable temperatures, crop failures, uncontrollable floods and unbreathable air are some of its consequences. Another person blames the Government or, better said, blames the inaction of the Administration for the mess. It is supposed, he says, that “it should serve the people, but it doesn’t.”

The director does not give the floor to experts, scientists, or politicians who explain what is happening or how the problem should be tackled. Jain is content to leave audiovisual evidence of what he sees through his lens, as if he were a tourist interested in recording how the inhabitants of New Delhi live and think, one of the most populous cities in the world, with 30 millions of inhabitants. There are no adjectives to describe it. The image speaks for itself.

Invisible Demons owes its title to those invisible particles that pollute the air and make the air in the city almost unbreathable.

Invisible demons owes its title to those invisible particles that pollute the air in the city and make it almost unbreathable. The origin of the problem, however, is not the particles, but the accumulation of political, social and economic circumstances that allow companies to destroy rivers and pollute the air with impunity. Not just in India but on a global scale.

The documentary has the merit of giving face and voice to anonymous citizens, who are, in the end, the least responsible, but, on the other hand, the first to be affected by a global problem. And the question falls under its own weight: When will the most polluting countries do justice to the poorest? Who pollutes, pay and bear the consequences.

Diabetic macular edema: greater than 7% of diabetics have this imaginative and prescient drawback

Food waste means the loss of the Earth