The alarm signals left by the labor reform: a stressed market and more layoffs 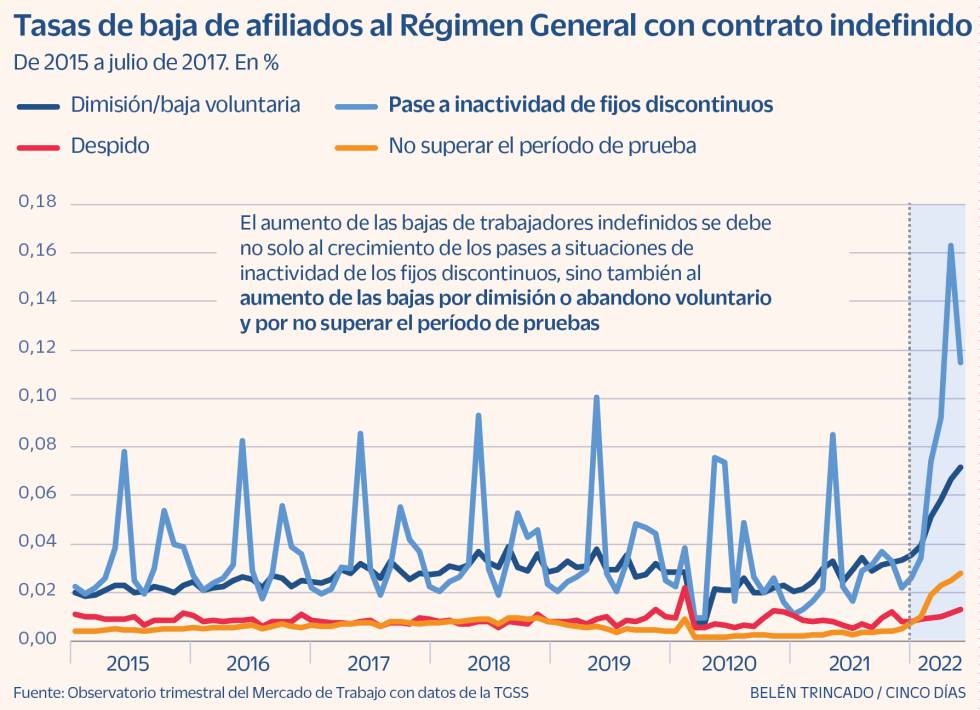 All labor reforms go through three phases: anticipation, in which before the new norm is approved, employers make decisions about what may come; the one of application, once the law is approved; and the stabilization period. This is explained by the Fedea researcher, an expert in the functioning of the labor markets, Florentino Felgueroso, who yesterday pointed out that the Spanish market would now be beginning the third of these phases in which the effects that the norm is generating are beginning to be analysed.

Although all the experts agree that it is too soon to make a meaningful evaluation of this labor law, and that a greater transparency effort would be needed on the part of the Government to provide more data that would allow for more decisive analyses, the Labor Market Observatory, which elaborated by the EY-Sagardoy Institute, Fedea and BBVA Research, yesterday presented a first and exhaustive balance of how the reform that entered into force in January is working.

This evaluation indicates that after nine months of application of the norm –six months from its full entry into force– the effects of the reform are lights and shadows but, above all, they leave some alerts to be aware of. One of them arrives, precisely from the hand of the reactivation of the economy. According to this report, “the recovery in employment could already be reaching its ceiling – especially on the side of permanent contracts – without having clearly exceeded the level prior to the pandemic.”

The person in charge of economic analysis at BBVA Research, Rafael Doménech, considered yesterday that the membership data known for the third quarter “anticipates a certain slowdown in contributors that is consistent with other indicators such as GDP”, which this organization expects between July and September fell two tenths compared to the previous quarter, while employment increased just one tenth in this period. Thus, he expressed his concern that this exhaustion comes when only the number of employed has recovered to pre-pandemic levels, but neither the effective hours worked nor full-time equivalent jobs have.

Another of these alarms arises paradoxically from the improvement in unemployment. These experts explain that the drop in the unemployment rate to 12.5% ​​in the second quarter (the lowest since 2008) is not due exclusively to the improvement in employment, but also to the “sluggishness of the active population, affected by a disappointing evolution of the participation rate”. This means that since there are fewer people available to work, less job creation cuts the unemployment rate more.

Moreover, this is not the only negative facet of the drop in unemployment. As highlighted, unemployment fell especially among those who lost their jobs less time ago, while the long-term unemployed continued to grow and are now almost half of the total (48.6%).

These academics relate this cut in unemployment to the vacancy rate (jobs that, according to employers, remain unfilled, according to the quarterly labor cost survey). This rate would have risen again in the second and third quarters to around 140,000. Both indicators reflect a more stressed labor market because there are more vacancies than the Spanish average over time and unemployment also below that average over time, which means that there are increasingly more difficulties in matching to cover the growing vacancies with the help of work that is needed.

This tension in the market and, above all, this growing level of vacancies, “is worrying in an economy that has not yet recovered the activity and the hours worked prior to the pandemic. These are imbalances that arrive before a full recovery,” Doménech warned yesterday.

At this point the third of the alarms would arrive, preceded, however, by a very positive fact: the historical maximum of indefinite contracts –there have been 3.3 times more than between January and August 2021– and an unprecedented reduction – 39%– of temporary contracts during the first eight months of application of the labor reform. This has turned the number of new hires that became permanent by 48% compared to the average of 9% that they had been until now. In addition, the temporary rate of the stock of workers has dropped four points in the second quarter, to around 20% (and even lower in the private sector).

However, the alarm goes off with the increase in the affiliation rates of new permanent workers. That is, the terminations of fixed contracts increase. The main cause is the “substitution effect” that is taking place in the old temporary contracts that are now becoming permanent discontinuous contracts (considered indefinite but that cause affiliation to be withdrawn in inactivity processes). Thus, these casualties contaminate the entire indefinite contract.

Having said this, the authors of this work appealed to the need to carry out more detailed studies that really show the qualitative benefits of, for example, the success of the discontinuous fixed, finding out the annual income of these employees; or analyzing that they reflect the real duration of the new ordinary indefinite contracts, something that will be seen in three or four years with the continuous sample of working lives (MCVL).

STEM. The authors of this labor market observatory highlight “three positive facts” of the recovery and during the first eight months of application of the labor reform. The first and most important is the acceleration of employment growth in STEM (science, technology, engineering and mathematics) occupations, which have notably increased their share of employment, because these professions were also the least affected for the pandemic. However, the researcher on talent attraction at the Complutense University of Madrid, Raquel Sebastián, yesterday drew attention to the polarization of this type of jobs, since only three communities (Madrid, Catalonia and Andalusia) concentrate more than half of all high-tech employment. In turn, Sebastián pointed out that this type of qualified employment generates many jobs in services that, on the contrary, are in the low band of the salary band, which also generates polarization in the internal labor market of each region.
Ninis. The volume of young people between 18 and 24 years old who neither study nor work (ninis) has fallen to its minimum values ​​to 11% from 15% before the pandemic.

training. In the last year there has been a significant increase of almost 5 points in the percentage of adults receiving training, up to 16%.

Pamper your motorcycle even when you leave it parked