The pantheon that keeps the remains of Eva Perón in the Recoleta cemetery does not bear her name. Carved into the black marble that covers it, it simply reads “Familia Duarte,” her maiden name. We will have to pay attention to the bronze plates to know that her body is there. The tomb of the most revered and hated woman in Argentina (although the passage of time has strengthened devotion and weakened blind repudiation) is on a corridor only one meter wide, hidden from the curious. Today it is more of a tourist attraction than a pilgrimage center for the faithful. This Tuesday, however, the flower crowns were piled on the padlocked fence and people milled around them. The 70th anniversary of her death was celebrated, she was a victim of cancer when she was only 33 years old. But Eva’s memory can do little to conjure up the divisions of the ruling Peronism, fractured in internal disputes that has the country on the brink of the abyss. Avoid joining, but not enough.

“It feels, it is seven, Evita is present”. The people sang, took photos with their fingers in a V – a gesture that identifies Peronism – and then sank into silence. The presence of Eva Perón in the Recoleta cemetery is one of the most paradoxical events in Argentine history. Eva Perón, the “flag-bearer of the humble”, the illegitimate daughter of a conservative politician, rests among ranchers, independence heroes, famous writers, bankers and deeply anti-Peronist military coup leaders. 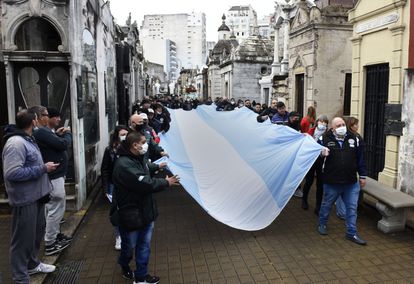 Militants, trade unionists and citizens walk in procession towards the tomb of Eva Perón, this Tuesday, in Buenos Aires (Argentina). MATIAS CAMPAYA (EFE)

The most famous of them is called Pedro Aramburu. In November 1955, after the coup against Juan Domingo Perón, Aramburu proclaimed himself president and ordered the embalmed body of Eva Perón to be stolen from the headquarters of the General Confederation of Labor (CGT). The intention was to nullify any possibility of devotion and hide the corpse from the eyes of the Peronists. Eva’s body ended up buried under a false name in Milan, Italy. In 1970, the Peronist guerrilla Montoneros kidnapped and murdered Aramburu. His marble tomb is today less than 50 meters from Eva Perón’s. “It was fate,” says Adriana Komisuk, president of the Partido Justicialista in Recoleta, the commune where the cemetery is located. “Eva could say ‘look, you don’t love me, but we rest together,’” she reflects in front of the pantheon.

On the walls of Buenos Aires you no longer read “Long live cancer”, the phrase that anti-Peronism painted when the disease devoured Perón’s wife. There was so much hatred that the wealthy classes had for him. She was not forgiven that she had been an actress in her early years, or that she dared to stand on an equal footing with men. She also didn’t want her to dress in haute couture, when her destiny was cheap store clothes. If she caressed a child, it was pure demagoguery, false sensitivity in a society that was fine as she was. Eva Perón survived that ridicule and changed the history of Argentina forever.

“Eva is part of the Argentine political culture, which does not mean that she continues to arouse conflicting passions,” explains Federico Lorenz, historian at Conicet (National Council for Scientific and Technical Research). “There is a superficial level of misunderstanding, which was evidenced when Alan Parker’s musical Evita was filmed with Madonna in the 1990s,” he says. Even today, many Peronists do not forgive President Carlos Menem for lending Madonna the mythical balcony of the Casa Rosada from which Perón and Eva spoke to the crowd. “More deeply we have what Evita meant during Perón’s first government, or during the seventies. Today it continues to be a convener from the point of view of Peronism because there is an unresolved struggle”, he says. This fight has to do with social rights, feminism and what Perón’s party understands by economic sovereignty. So unresolved is this debate within the party that this Tuesday the tributes multiplied without unity.

Small groups gathered in the cemetery, taking turns passing in front of the pantheon. But there was also a march by the Peronist Youth and another ceremonial act in the CGT. The Justicialista Party, as it is formally called, convened a fourth event at its headquarters in Buenos Aires, where the presence of the president, Alberto Fernández, was expected. “Eva Perón, an Argentine passion,” wrote the vice president, Cristina Fernández de Kirchner, on her Twitter account. And she accompanied the text with an image of the Ministry of Health, a few meters from the Obelisk, where the steel-cut faces of Eva Perón occupy nine floors of the north and south faces of the building. To the north, looking at Recoleta, the neighborhood of the rich, an euphoric Eva gives one of her traditional speeches of social denunciation. Towards the south, from where the poor workers who filled the Plaza de Mayo on October 17, 1945 to ask for Perón’s freedom left, you can see the “Eva de los humbles”, smiling and with a huge flower on her chest. . 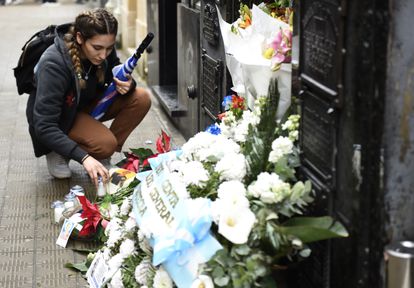 A young woman places a candle next to crowns and bouquets at the tomb of Eva Perón for her 70th death anniversary. MATIAS CAMPAYA (EFE)

Those two Evas, the one that is “fighting capital” – as the Peronist march says – and the one that smiles at the people are at the heart of the disputes that are currently bleeding the party dry. Kirchner, and Kirchnerism, have appropriated the combatant Eva, an icon that collides with the urgencies of an indebted country, with record inflation and four out of ten inhabitants submerged in poverty. Traditional Peronism, that of the unions and governors, and also that of President Fernández, must strike a balance between these two worlds as never before. Then there is the Eva of the people, “that convening figure for the women’s movement, and the eminently popular one, as a symbol of the neglected,” says Lorenz. “There is also a state Evita,” he adds, “the one with tributes, another that is rooted in family oral traditions, another that is reproduced on T-shirts [sudaderas] and also in the hate messages circulating on WhatsApp. This shows that she is a living figure, as she is constantly re-signified”.

It can also be added to the Eve who enabled the female vote, or the one who spent hours and hours receiving visits from poor women and children. There is the “shirtless” Eva, a symbol of the workers, and the “Evita Montonera” who in the seventies was fuel for the armed struggle of the Peronist guerrillas. And, of course, the one that died on July 26, 1952, weighing 37 kilos and supported by a harness for her last public presentation with Perón. “The Undersecretary of Information of the Presidency of the Nation complies with the painful duty of informing the people of the Republic that at 8:25 p.m., Mrs. Eva Perón, Spiritual Chief of the Nation, has passed away. The remains of Mrs. Eva Perón will be taken tomorrow, in the morning hours, to the Ministry of Labor and Welfare, where the burning chapel will be installed,” was the official message. Hundreds of thousands of people – some historians speak of up to two million – paraded for two long weeks in front of Eva’s embalmed body. The myth was already born.

England sweeps Sweden and already has its final at Wembley