Testing the Telefunken Multitalent RC822: This city e-bike is cheap and good

An e-bike for the city is an alternative to public transport or the car. Thanks to electrical support, the ride is less strenuous than on a classic bike. If you mainly use the e-bike in the city, you need full equipment according to the StVZO. Characteristics such as off-road capability are then less important.

The Telefunken all-rounder RC822 as a step-through bike offers everything an e-bike should offer for the city. Our test shows how well the city e-bike drives. We also explain more about the topic of electrified outskirts in the guide From 777 euros: That’s how much a good e-bike for the city costs.

The Telefunken Multitalent RC822 reached us almost completely pre-assembled. It is important here to retighten all relevant screws. This mainly affects the pedals, the basket on the handlebars, the bike computer, the front light, the seat post and, in particular, the guide rail with the battery holder under the seat at the rear of the frame. Ideally, you need a tool set with a thin 6 mm Allen key and a 15 mm combination wrench for the pedals and, if necessary, a torque wrench. The recommended torque can be found in the comprehensive instructions for use.

The processing leaves an extremely solid and valuable impression. Welding seams are visible on the aluminum frame, but that’s normal in this price range. All cables are already pre-assembled and routed and secured in such a way that they don’t hang around unnecessarily. The complete equipment according to StVZO with lights and reflectors is pre-assembled. There is also a basket on the handlebars for shopping, a luggage rack, mudguards and a chain guard.

The placement of the battery under the saddle is not quite ideal. Here you should make sure to tighten the screw on the guide rail again, which is not so easy due to the position. Otherwise the rail will slip out of the frame. To remove the battery for charging, you first have to remove the saddle using the quick release. In comparison, we find solutions in which the battery is integrated in the frame, such as the Eleglide T1 Step-Thru (test report), to be more practical. A key is used to unlock the lock for the battery. This is also necessary to set the battery to “on” before the first ride. It stays there while driving.

The handlebars are typical for a city or Dutch bike. This is clearly bent backwards. On it are the two levers for the front and rear brakes and a classic bell as a bell. Unlike loud horns from Asian bicycles, this corresponds to the StVZO. 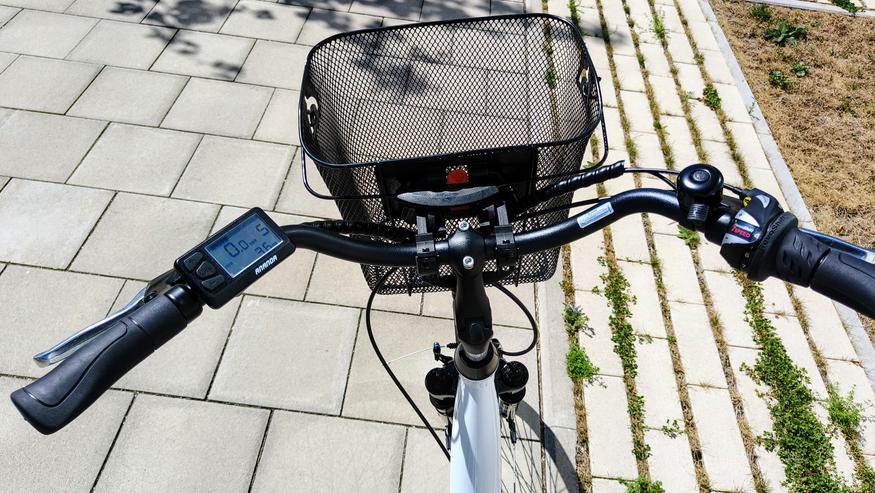 The large LC display is on the left side and is easy to read even in bright sunshine, and it does not reflect. It shows the speed and the selected support level. The display also shows the kilometers traveled. You can use the power button to switch to other driving information, such as total kilometers, average speed, maximum speed or time driven. To switch on the lighting, press the plus button for almost 2 seconds. The front and rear lights are sufficiently bright and are operated by the on-board electronics via the battery. The pushing aid is activated by pressing the minus button for 2 seconds. The electric motor now pushes the wheel along at a maximum speed of 6 km/h. You have to hold down the minus button, which is really annoying.

As a Dutch bike, the Telefunken Multitalent RC822 has a low step-through thanks to the strongly downward-bent frame – also known as a Dutch bow or wave frame. This design has historically established itself especially on women’s bikes to make it easier to get on with a skirt. In the meantime, this shape is also often used on a city bike. The low entry allows you to saddle up comfortably on the bike, since it is not necessary to lift your leg over the top tube. In addition to skirt wearers, this also accommodates clumsy or older people.

However, the single main tube is also thick in order to better counteract the forces exerted by the weight of the driver. The overall high seating position has disadvantages for people who prefer a sporty driving style, but it is comfortable because the back is not tilted forward as much. This shape is appropriate for use in traffic or on cycle paths in the city.

Up to a height of 185 cm, we were able to use the bike well in the test. We had already pulled this out to the maximum recommended position in the test. For taller people, a longer seat post would be appropriate. Otherwise, the knees will be bent too much when driving. The angle of inclination of the stem with the handlebar can also be adjusted using an Allen screw. With a weight of almost 25 kg, the Telefunken multi-talent CR822 offers a permissible total weight of 150 kg. You can dare to ride an e-bike up to a body weight of around 125 kg.

The Telefunken all-rounder CR822 offers a comfortable and safe driving experience when cycling through the city. The handlebars appear stable and implement changes of direction immediately without wobbling. In combination with the soft saddle and the large 28 inch wheels as well as the adjustable suspension fork from Zoom with a travel of 45 mm, the ride always feels comfortable, even with a smaller curb.

Even at a higher speed of around 30 km/h, you feel safe on the city bike when turning sharply. The front engine provides a clearly noticeable support, which starts after about two pedal revolutions. The support is always noticeable, even at speeds of just under 25 km/h. So we could easily take a steep underground car park driveway at 20 km/h. We were able to cover a distance of about 20 km in less than 1 hour, even in high summer temperatures, without sweating too much. A trip through paths covered with leaves or gravel roads worked without unpleasant slipping or spinning of the wheels.

The 7-speed Shimano gears from the Tourney series work reliably and are common for entry-level bikes. It is perfectly adequate for driving through the city. Only when pedaling above 25 km/h does the high cadence make you realize that the right gear ratio for higher speeds is missing.

The “classic” brake system with a V-brake is no longer quite up-to-date, but still not unusual for the price. As is known from bicycles, two rubber brake pads enclose the front and rear wheels via mechanical actuation of the brake levers. Many e-bikes already use disc brakes here, especially heavier off-road models with more powerful mid-motors. Nevertheless, the brake equipment seems practical and safe enough, which could be due to the overall low overall weight. In addition, maintenance is easier than with disc brakes. 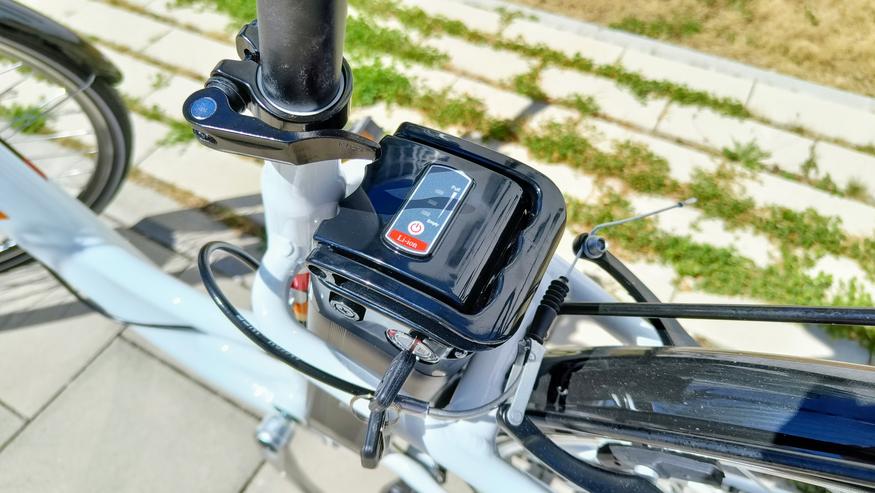 The type of drive caused discussions in the editorial office. A front engine applies to driving dynamics as a rather bad solution. However, it is often found on inexpensive e-bikes. One of the advantages is that a front motor can be combined with any circuit and often works more quietly. These are usually lighter and also require less maintenance.

The disadvantages include that the additional driving forces can tug on the steering axle. There is also an increased risk of the front wheel slipping off on unpaved, slippery or wet surfaces. A front engine often does not react as directly to pedaling movements as, for example, a mid-engine. They are therefore less suitable for off-road use. However, we don’t see any major problems for driving through the city on asphalt. On the all-rounder CR822, we didn’t notice any front wheel spin, not even on gravel.

The front motor has an output of 250 watts at 40 Nm and offers a total of five different levels. These differ in the respective permissible maximum speed and range from 12 km/h (level 1), 16 km/h (level 2), 19 km/h (level 3) to 22 km/h (level 4) up to 25 km/h (level 5). The support increases linearly with the cadence, which ensures largely jerk-free riding. At the highest level, the electric motor powerfully pulls the wheel forward, even above 22 km/h. At 25 km/h, however, there is a noticeable delay when the electric support switches off.

The lithium-ion battery (Li-Ion) works with a voltage of 36 volts and has a capacity of 374 Wh. This makes it one of the smaller batteries in an e-bike. Nevertheless, Telefunken states a range of about 100 km. We consider this to be very optimistic. In the end it depends on the driving style, the weather and the outside temperature as well as the surface. With a driver weighing 85 kg in city traffic, we assume a range of 50 to 60 km.

The Telefunken Multitalent CR822 usually costs between 1050 and 1100 euros. The best offer at the moment Alternate is only 849 Euro. The e-bike for the city is available in the colors white, anthracite and wine red.

Telefunken Multitalent CR822 is an inexpensive and solid e-bike for the city. Technical marvels are not to be expected at a price of 1050 euros or more, so the technology is rather simple, with a front motor, a battery with 374 Wh and a V-brake. In our opinion, this is more than sufficient for driving through the city. In addition, the workmanship looks decent – apart from the not quite ideal holder for the battery. The City E-Bike is particularly suitable for people who are less athletic or agile and mainly want to cover short to medium distances in the city. The price is okay for what is offered.

This is how the life of Junior Míguez, from UPA Dance, has changed: his business, his family and his illness