Tchouameni’s notebook: inspiring phrases and sessions with the psychologist 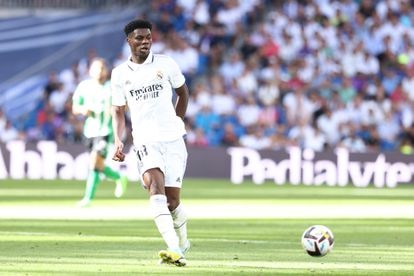 Real Madrid walks in this beginning of the course on the embers left by the surprising departure of Casemiro, and it does so, successfully for the moment, hand in hand with Aurélien Tchouameni, the player who points everything. The 22-year-old Frenchman, a new member of the group of young white men, took up the habit some time ago, on his own initiative, of writing down in a notebook the phrases that inspire him, what he learns and what he still has to go. Very concerned about training and mental preparation as a way to grow with the ball, his psychological routine, according to people close to him, continues in his first steps in Valdebebas.

He points his own and Carlo Ancelotti does the same with his fit in a team that for six years worked on the network of Casemiro, the footballer who triumphed correcting everyone. The former Monaco player is the closest thing the Merengue club has signed to the late Brazilian since Marcos Llorente’s failed attempt at the Bernabéu, although he is not a carbon copy. He is deployed in attack, as he demonstrated in Cornellà, but it remains to be seen how far his ability to position himself in the right place and sweep on the big fire nights remains to be seen. Against Betis, more contained behind and effective in disputes (he won 16 of 19), he showed progress in this task.

His offensive possibilities are already known by Ancelotti, however, what the Italian is most in a hurry for is the latter, his defensive skills in extreme situations, one of his certainties while he had Casemiro. And on that he works in the Sports City, so that he mechanizes as soon as possible what to do at all times in such a sensitive location. “Having Kroos and Modric by your side is not the same as having Camavinga, Valverde or Ceballos,” Carletto warned last Friday. A process that also affects the rest: “Tchouameni can reach [arriba] and we have to get used to this movement to keep our balance. The other media must arrange their exit to the rival area”, the white coach pointed out a few days before.

The tactical equation is nothing less for a coach who has summed up football in a “simple” way: “Attacking is talent and defending is organization.” A transit that also occurs at a time when the new cavalry of young Madrid media, of which Tchouameni is a part, is increasingly a protagonist without the classic recipe (Kroos and Modric) having lost its validity.

Ancelotti has also pointed out the options of the German and Camavinga for that vacancy, but at the start he has given flight to the fourth most expensive signing in white history (80 million fixed, which could reach 100) to acclimatize him as soon as possible and, if necessary, insert the scalpel. From less to more -in his league debut in Almería the Italian said of him that the shirt weighed on him-, in each game he has been growing and the next commitments (this Tuesday against Celtic in Glasgow, 9:00 p.m., Movistar Champions League) will contribute More information on its evolution.

“Not wanting to show too quickly”

Tchouameni was supposed to have a soft landing under Casemiro’s shelter, however, on the second day he was left alone and the spotlights pointed fully at him, “a very serious and somewhat shy boy”, as described in Valdebebas. One of his concerns was “not giving in to external pressure and not wanting to show too quickly”, according to Cedric Quignon-Fleuret, a sports psychologist whom he met when he started at Girondins and with whom he consolidated his professional relationship in the Monaco. Already far from the Principality (also the doctor), with him he maintains the habit of doing a session before and after each game. “In the previous one we talked about how to approach it and the issues that are important to reinforce or improve for him. And then about the sensations of it and the mental goals we want to achieve, ”explains Quignon-Fleuret.

“One of the issues that most interested Aurélien from the beginning was the repetition of very high performance based on motivation, how to push your limits and face new challenges regularly”, the psychologist abounds about a job that, as he admits, is not so usual to confess it in the world of football. “Some receive accompaniment, but speak little about it. There are those who still think that it is taboo because they associate psychology with discomfort, and this is not the case. It is more and more frequent that there are footballers concerned about mental work, although not so many compared to other sports”, points out the doctor.

And from those sessions came the idea of ​​keeping a notebook where he writes down what inspires him, and his short, medium and long-term goals. With Madrid and with France. It was, according to Quignon-Fleuret, the idea of ​​Tchouameni, a guy with a reputation for being a “very bad loser” and “a competitor to the extreme”, as his friend Jules Koundé defined him, with whom he met at Girondins.

A great fan of the NBA, an admirer of Barack Obama and Martin Luther King, and of American culture, from a very young age he began to learn English to understand the music he liked. Now, with Spanish classes three times a week, the sound of Madrid depends largely on him. According to Ancelotti, with young people like the French guitars appear.