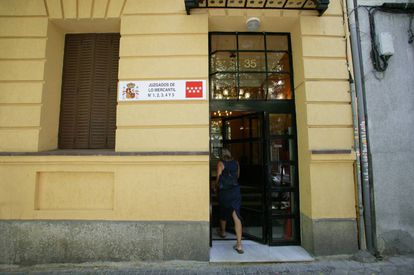 The reform of the Bankruptcy Law, a tool that regulates all situations of non-payment between debtors and creditors, arrives this Thursday at the Congress of Deputies for its final processing. The new text, which incorporates the new community regulations on commercial matters, introduces variations to speed up procedures and, among other things, promotes the early restructuring of viable companies and the possibility of exempting debtors in good faith from obligations. The rule, if finally approved in the extraordinary plenary session, comes almost two months after the end of the moratorium agreed in March 2020 as a result of the outbreak of the pandemic, which established a grace period that exempted companies and freelancers from their obligation to request bankruptcy proceedings despite being insolvent.

The objective now is to facilitate the continuity of viable companies that are experiencing difficulties. But the end of the moratorium will result, according to experts, in an increase in contests, especially among the so-called zombie companies (it is estimated that there are at least 40,000), which have benefited from the advantages that existed until 30 June to survive in a situation of vulnerability with a business model of doubtful viability and that, with the end of the moratorium, they have to adapt to the new rules. In July, contests grew by 25% compared to the same month last year, to 774, the highest figure since March 2014, according to data from the financial consultancy Informa D&B.

The reform was to enter into force on July 17, when the deadline given by Brussels to adapt Directive (EU) 2019/1023 expired, one of the commitments sealed in the Recovery Plan in exchange for European funds. Finally, the text was approved in Congress just in July, but when it passed to the Senate, four technical amendments were introduced, so the second vote was pending. The reform aims, according to a press release from the Lower House, “to ensure the continuity of companies and businesses that are viable, but that are in financial difficulties that may threaten solvency and lead to the consequent insolvency.”

The reform establishes a series of “early warning mechanisms” that allow the responsible debtor to detect the need to act to avoid or channel insolvency. “In this way, free and confidential advice services will be established for companies in difficulty to enable advice to small and medium-sized companies in an early stage of difficulties,” according to the text approved in July by Congress. “In addition, the Ministry of Industry, Commerce and Tourism’s business health self-diagnosis website will be maintained, which already has free access,” he adds.

The new rule encourages debtors and creditors to reach an agreement before declaring bankruptcy to reduce the number of processes that affect solvent companies. This is how the restructuring plans are launched, which replace the current refinancing agreements and which are one of the central elements of the reform to avoid insolvency or get out of it. It is a pre-bankruptcy instrument, aimed at companies with difficulties, which favors a restructuring in case of probability of insolvency, compared to the current requirement that it be imminent. The objective is to encourage an earlier restructuring and, therefore, theoretically with greater possibilities of success. In addition, the decongestion of commercial courts is sought, since judicial intervention is hardly necessary.

A new single insolvency procedure is introduced for the self-employed and companies with less than 10 workers (with a turnover of less than 700,000 euros and less than 350,000 euros of debt), which aims to be faster, digitized and at a reduced cost. The objective is not to drown with paperwork to increase the possibility of business continuity. After a period of negotiation with the creditors of a maximum of three months, two possible itineraries are opened: a continuation plan if there is an agreement or, failing that, a quick settlement through an online platform. Some administrators have questioned whether the Government has deployed the necessary investment for this digital mechanism to work.

A practice that was being accepted in the courts, but was not in the law, is regulated: the possibility of selling one or several “productive units” of the company to pay off debts.

The so-called second chance is developed, with the setting of the exemption of unsatisfied liabilities for up to 20,000 euros to prevent the self-employed and individuals from having to liquidate their assets, such as their habitual residence. In public reductions, it will be possible to forgive debts of 10,000 euros with the Tax Agency and another 10,000 euros with Social Security.

The wording of the reform has been the subject of controversy and debate among stakeholders to assess and criticize some of the changes it introduces, but it is considered key to modernizing the system. Experts consider that it is still early to venture how many firms will fall after the end of the bankruptcy moratorium, and when the effects of the new rules will begin to be noticed.

Ayuso drags Feijóo to no in the energy decree