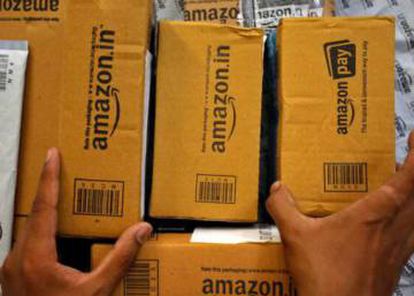 The 13,000 Spanish SMEs with a presence in the Amazon store sold around 850 million euros outside the country last year, 30% more than the previous year, according to a report published this Wednesday by the e-commerce giant. Half of these companies, which together employ 35,000 people to manage their online sales, had not exported before joining the platform.

Firms from Catalonia, Madrid and Valencia led total sales abroad, with 200 million for the first and 150 million each for the other two. Those three communities have the most small businesses on the platform, according to the report.

A part of the sales went outside the EU: in total, 75 million euros were registered in exports outside this territory last year, 45% more than in 2020. Of the total number of SMEs, around a hundred exceeded one million of euros of turnover for the first time in 2021.

In the report, Amazon highlights that “the 13,000 SMEs are scattered throughout the national territory” and that “more than 60% of these companies are based in provinces of Spain that are neither Madrid nor Barcelona.” The company states that in “provinces with extensive rural areas such as Lugo, Orense, Zamora, Soria, Cáceres, Palencia and Jaén, the number of SMEs that sell on Amazon has increased on average by more than 25% in the last year.”

“Marketplaces are of great importance in dynamic electronic commerce and constitute a growing sales channel to access international markets. ICEX will continue, as it has done up to now, promoting the knowledge and use of these channels to boost the competitiveness and internationalization of Spanish companies”, affirms María Peña, CEO of ICEX Spain Exports and Investments. “Amazon is a great ally for small and medium-sized companies, allowing them to increase their sales volume and exports,” says Xavier Flamand, Vice President of Services for EU Trade Partners at Amazon.