Spanish funds suffer in 2022 the worst returns in 20 years 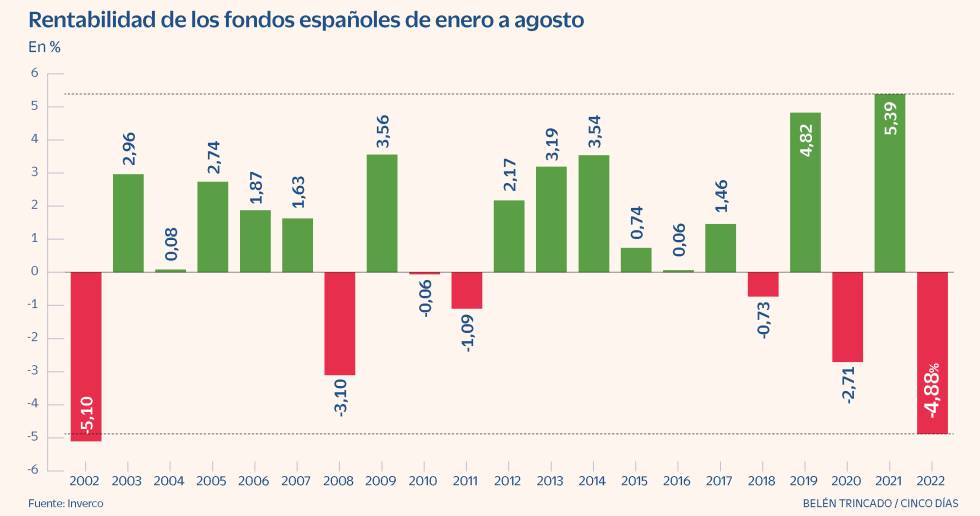 The year 2022 is being especially hard for the financial markets. The owners of Spanish investment funds have lost, on average, 4.88% of what was invested. This is the worst start to the year since 2002, when the dot-com bubble burst. This time around, the impact is coming from both the equity and bond sides.

The data released by Inverco, the association of fund managers, reveal that the depreciation of the Stock Exchanges and debt markets has caused a decline of 15,500 million euros in the assets of Spanish funds so far this year . If an estimate of the impact of the money that Spaniards invest in international investment funds is added (there is still no definitive data), the losses would already exceed 26,000 million euros.

The last time there were such sharp falls in Spanish funds, in 2002, these were totally concentrated in stock market funds, which dragged falls of between 15% and 25%. However, on that occasion the conservative funds, where most of the small investors are concentrated, offered positive returns.

This time the panorama of bottoms paints dark of general form. Every single fund category is in the red by 2022. Bonds have done almost as poorly as stocks, despite being perceived as safer.

The drama of the best-selling funds

BBVA. The two largest funds of the BBVA manager belong to the Quality range. The Quality Inversión Conservadora has assets of 7,600 million euros. So far this year, its participants have lost 3.88% of their investment. The Quality Moderate Investment, with 8,875 million euros of assets, is down 5.6% in the year.
CaixaBank. After the absorption of Bankia, the group inherited one of the largest investment funds on the market, Bankia Soy Así Cauto, with more than 5,000 million euros of assets today. The vehicle, already with the new brand, has lost 7.4% so far this year. The average annual yield in the last five years has been -0.5%.
Santander. Its largest fund is Santander Gestión Global Equilibrado, with almost 8,800 million euros under management. So far this year, its participants have lost 9.91% of what was invested.

Thus, fixed income funds have lost 3.81% so far this year, practically the same as Spanish variable income funds. And in mixed fixed-income funds (which carry a small part of the Stock Market), the fall is 5.6%. More than the pure international stock funds (-5.21%).

How can there be this crisis in the stock markets if the United States is at full employment and there is no recession in Europe? The explanation lies in inflation, which after the pandemic has become a persistent and worrying phenomenon. For many years central banks have kept interest rates very low to spur economies. Now, instead, they have to raise rates sharply to contain uncontrolled price increases.

Rate hikes have two effects: they cool demand and the economy – which hurts equities – and cause sovereign and corporate bonds to depreciate. That is why all kinds of funds have been affected.

The worst thing about this scenario is that nothing indicates that it will improve in the remainder of the year. Inflation continues to skyrocket and it is not at all clear that it has peaked. In the eurozone, August closed with an interannual rate of 9.1%, an absolute record. As long as prices are not contained, central banks will have to continue to signal firmness on rate hikes, which will continue to damage the economy and bonds.

In addition, the conflict with Russia predicts an autumn and winter with very high gas and oil prices, as well as electricity prices, which will have an impact on the production costs of many European companies.

Faced with this scenario, several analysis and investment firms, such as BlackRock or Credit Suisse, are recommending their clients to reduce the risk they have in their portfolios. Normally, the formula would be to increase fixed income, but this time it cannot be the definitive solution either. Neither increase the cash in the portfolio, since inflation ends up eating away at real profitability. All that remains, then, is to prioritize the highest quality companies and the best debt issuers, and wait for the downpour to pass.

Mazón will reduce the housing tax to Valencians who earn less than 30,000 euros a year by 70%