Spain, the United States and Latin America join their voices in the economy in the face of the war in Ukraine 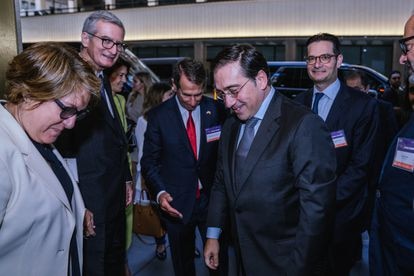 The Foreign Minister, José Manuel Albares, together with the President of PRISA, Joseph Oughourlian, and the President of the Spain-United States Chamber of Commerce, Alan D. Solomont, upon arrival at the Global Economic Forum between the United States, Latin America and Spain. John Arredondo

Political, economic and educational leaders from both sides of the Atlantic met this Wednesday morning at the exclusive Yale Club, in the heart of Manhattan taken over by the United Nations General Assembly, to discuss the challenges of the relationship between Spain, Latin America and the United States in the context of a global scenario wounded by the war in Ukraine and the effects of the pandemic: growing inequality and problems in supply chains, whose resilience has been put to the test.

The forum, which featured speeches by the President of the Government of Spain, Pedro Sánchez, and the President of Colombia, Gustavo Petro, who had just delivered a powerful speech the day before at the UN, was organized by EL PAÍS and the Chamber of Trade Spain-United States; sponsored by Abertis, Baker & McKenzie, Hiberus and Iberia, with the collaboration of the OEI (Organization of Ibero-American States).

The speakers explained the importance of greater cohesion and of strengthening the historical, economic and cultural ties that unite Spain, Latin America and the United States in a context of difficulties and uncertainties, in order to take advantage of investment and economic cooperation opportunities.

The intervention in English by José Manuel Albares, Spanish Foreign Minister, was inevitably dominated by the news from Ukraine. Russia’s “unjustified, brutal and unprovoked” aggression has amplified, Albares said, problems accentuated by the pandemic: inequality, the strangulation of supply chains and the food crisis. Given this scenario, “the transatlantic relationship is crucial.” “When America and Europe decide to speak with one voice, the world listens and follows us.” The minister promised to use the upcoming Spanish presidency of the European Union to strengthen the relationship between Europe and Latin America. “Spain is and will continue to be the gateway to Europe” for the region.

José W. Fernández, undersecretary of the Department of State, also highlighted the strong historical, cultural and economic ties that unite Spain, the United States and Latin America and, in particular, the strong Spanish investments in his country. “Spain already has a long relationship with the US that grows stronger every year. The US continues to be a strategic destination for investment by Spanish companies”, he said.

José Morán, a partner at Baker & McKenzie, moderated a table with several directors of companies present in the United States. Morán highlighted the importance of the Inflation Reduction Law approved by the United States, which introduces economic incentives for clean energy.

Iberia’s Commercial and Networks and Alliances Director, María Jesús López Solás, explained how the company has experienced two very difficult years, with many challenges and difficulties due to the pandemic. López Solás stressed that despite these difficulties, the company has made a firm commitment to sustainability, with the modernization of the fleet to have more energy-efficient aircraft, among other measures. “We are fully committed to the emission reduction targets,” she said, stressing that the company has embarked on the path to sustainability. Iberia’s directive also highlighted the importance of the aeronautical industry for the future of the aviation sector and encouraged “to bet on the development of an industrial aeronautical hub in Madrid with the Next Generation funds that will make Spain the European reference center for maintenance of airplanes”.

Investments are also very necessary in the infrastructure sector, particularly the United States, which has launched a plan to renew them, according to Lluís Sererols, financial director of Elizabeth River Crossings, an Abertis company. The Abertis group is interested in participating in public-private alliances to develop and manage infrastructures in the United States, a market in which it already has a successful presence.

Marcos Latorre, general director of Hiberus International Corp, underlined the importance of technology in the changes in lifestyles that the pandemic has brought, and in particular with the extension of teleworking and new ways of relating. Latorre pointed out some sectors of the future in technology, among which he highlighted data scientists and cybersecurity. João Costeira, member of the Executive Committee of Repsol, pointed out that large investments are needed to finance the energy transition and praised the tax incentives included in the United States’ Inflation Reduction Act as a more intelligent measure than imposing new taxes on energy.

Before, in the presentation of the event, Joseph Oughourlian, president of Prisa, the publishing company of EL PAÍS, highlighted how the communication group is in practice a “multilatina”, since more than 70% of its income and results come from Latin America ( in the case of this newspaper, half of its readers are already in this hemisphere, he recalled). “We have decided to invest heavily in Latin America in recent years, despite all the uncertainties, despite politics, regulation and also exchange rate issues,” he said.

Officials from international organizations also participated in the event. Christian Asinelli, corporate vice president of Strategic Programming at CAF-Development Bank of Latin America, pointed out that “Latin America and the Caribbean can be a solution region” in the face of the problems and uncertainties that shake the world, derived from the effects of the pandemic and the Ukrainian war, mainly. “Although the pandemic has left numerous problems and increased inequality, Latin America has the conditions and the potential in energy and environmental transition, for example,” explained Asinelli, highlighting how the countries of the region are capable of overcoming their differences to put your development tools.

In an eminently economic forum, Mariano Jabonero was in charge of putting the region in the perspective of education and from the experience of his work as secretary general of the Organization of Ibero-American States (OIE). Jabonero painted a worrying picture (although he offered proposals for the future and refused to fall into “catastrophism”). The group of countries that encompasses the OIE is very thriving (it is the largest bilingual community and the fastest growing, with 850 million people, Spanish and Portuguese speakers), but it is also the one that grows the least globally in terms of productivity, together with Africa sub-saharan The problem is, according to Jabonero, educational systems “of low quality and low inclusion.” “That’s the big challenge, along with the fact that vocational training and higher education fail to improve productivity,” he added. What to do about it? Bet on a hybrid education, in which the digital transformation is strengthened, access to broadband and the technological skills of teachers are improved, and household access to the Internet increases, suggested Jabonero. “The future is none other than virtual technological and digital. It is an educational challenge, but also a political and economic one.”

The serious problem of illegal emigration