For three years the Maker Faire Hannover could not take place in the usual form, now it was finally possible again – and it felt as if nothing had happened: Around 12,600 visitors, robots and mythical creatures, steampunks and cosplayers (and Batman!) populated the HCC in Hanover on September 10th and 11th.

The technology and creative festival for the whole family. Everyone who enjoys tinkering, building, inventing, experimenting, tinkering, handicrafts and recycling gets their money’s worth here. A Maker Faire inspires creative and playful use of materials and technology and invites you to talk to like-minded people. Above all, visitors can also touch and try things out themselves: in numerous hands-on activities such as experiments, workshops or art projects.

Those who were there marveled at the DIY projects on display, lent a hand in workshops, listened to exciting lectures and followed the colorful program on the show stage on the outdoor area in the best late summer weather. Two highlights in the literal sense spat – of course – fire, that must be: The animal deity Garuda from Hindu mythology spread its wings to a span of 15 meters as soon as its builder Matthias Vijvermann gave the command via remote control. And flames also erupted from the oversized double wheel MansterWheel of the Czech PropanePunk Circus. 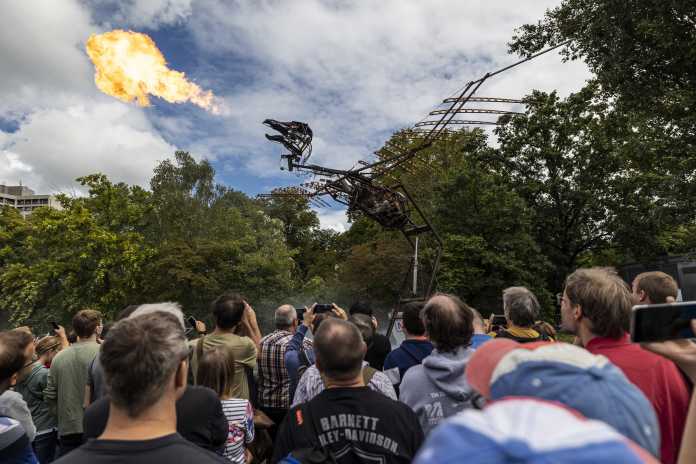 A little less noisy, but all the more atmospheric, for the second time one of the three exhibition halls at the HCC served as a Dark Gallery, in which interactive light installations and luminous artworks were particularly intense. As is good Maker Faire custom, there was inspiration and guidance from a crowd Participation activities – you could build robots, learn to program and solder, test 3D scanners or the upcycling of plastics into 3D printing filaments. Alternatively, lanyards were sewn, water rockets launched, linoprint tried out and gold forged.

Anyone who stopped by the make stand not only encountered project classics such as the tea bunny, the hourglass 2.0 and the oscillating tube asteroid, the editors also showed very current projects there, such as the post owl with a cyborg shell and the ESP32 -Kern and the combination of solar weather station with weather mill, which we will describe in detail in the upcoming Make 5/22 (from September 22nd at the kiosk). Articles and projects from past Make issues were also presented elsewhere – we are delighted that so many of our authors took part in Maker Faire with their own stands and showed their works there. 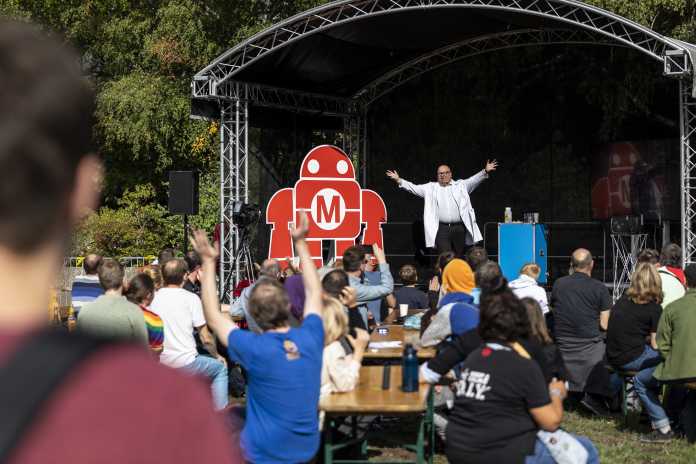 Since it started in 2013, Maker Faire Hannover has not only become a place of amazement for visitors, but also an important meeting place for exchange and mutual inspiration within the maker scene. This also applies to the DIY YouTubers, who have been meeting at Maker Faire for years and this time again discussed in front of an audience and passed on impulses from the handicraft scene to the audience to imitate.

Last but not least, we were particularly pleased about the distinguished visit from the USA: Dale Dougherty, the founder of Make: Magazine from the USA and also the father of all Maker Faires, was there from the opening until Sunday and was in conversation with our Author Guido Burger can also be seen live on the show stage. And we were able to personally introduce him to Daniel Springwald, who has just won one of the Amazing Maker Awards presented by his US colleagues with his animatronic Tesla bust described in Make 4/20. Many thanks to everyone who took part and was there – we’ll see you again next year in Hanover at the Maker Faire 2023 at the latest!

Another Maker Faire in Germany will open its doors to visitors this year: in cooperation with the Gottlieb-Daimler-School 2, the youth research center for energy and the environment in the district of Boeblingen is organizing am 19. November 2022 already the fifth Maker Faire Sindelfingen. The Call for Makers runs until September 30th. All further information is available at:

And for next year there is already a date to mark: The Maker Faire Hannover 2023 takes place on August 19 and 20, 2023 as usual in the Hannover Congress Centrum (HCC). We are looking forward to it already! As usual, further information will be available on the Maker Faires website in German-speaking countries in good time:

Clean Bandit surprises with 'Sad Girls', their song with French the Kid and Rema