SMEs react with contingency plans to the increase in costs: they adjust production and schedules 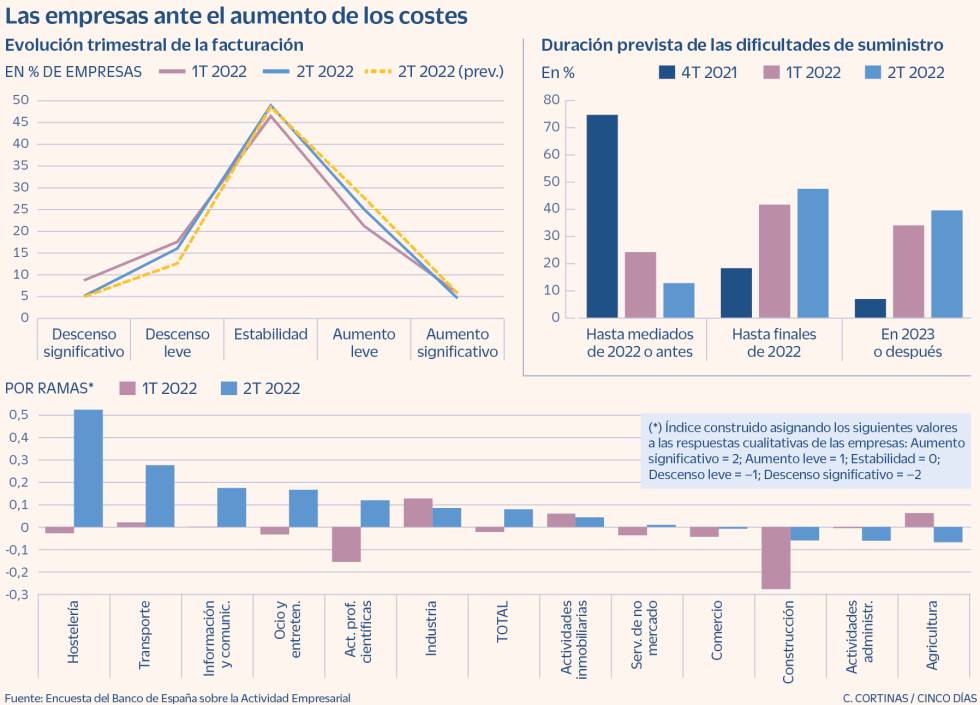 The management of a paper mill in Barcelona, ​​which has a hundred employees, has decided that it could not continue to maintain its production rate, and not only because of the increase in energy prices but also because of the supplies it uses. Simply, those responsible came to the conclusion that production was no longer profitable for them and the solution was to carry out an adjustment plan that would make their activity profitable again, minimizing damage as much as possible. That is, they designed a contingency plan that has led them to temporarily close until they have removed all the stock they had. That was his response to ensure its viability.

This is one of the numerous cases that have arrived these days at the headquarters of the main employers’ organization of small and medium-sized companies (Cepyme), a partner of the large CEOE employers’ association, they have warned that “the increase in total costs, especially supplies and energy, it’s faster than sales.” Specifically, in the first quarter of 2022, total costs rose by 23%, while sales increased by 19.8%. “This situation, which is getting worse as the year progresses, worsens the results of many companies and leads to a deterioration in liquidity and the competitiveness of companies,” they add.

The inflationary spiral that the economy has been experiencing since the last four months of 2021 has caused that, at least, eight out of ten companies in Spain have experienced an additional increase in their production costs due to the increase in the cost of their intermediate consumption, fundamentally those related to the power and some supplies. This is reflected in the Survey of Spanish companies on the evolution of their activity in the second quarter of this year, prepared by the Bank of Spain, which, however, also ensures that barely 40% of these companies have transferred this increase to final prices. of their goods and products.

After verifying how widespread this situation is, those responsible for Cepyme have carried out a round of consultations among several of the most representative employers of the Spanish economy to find out how they are dealing with the situation, and have detected numerous companies that are already setting up contingency plans. or adjustments of various kinds. Thus, “they are restructuring their production plans, even with partial or total temporary closures of part of their chains, and adjusting stocks and schedules”.

This is happening, above all, in the sectors most affected by the increase in costs, which are those with intensive use of gas and electricity, such as the paper industry, metallurgy or steel, which more often interrupt their production to adapt it to the cost increase. Although these employers responsible assure that these plans have also been found in numerous smaller companies in the hospitality industry, the manufacturing and agri-food industry, as well as agriculture and livestock.

Another example of these plans is the one adopted by a slaughterhouse that had morning and afternoon shifts and has temporarily suppressed the latter, “to accumulate as little as possible in the chambers, the use of which triggers the electricity bill”. Thus, it seeks to put everything it manufactures up for sale, to avoid costly storage.

Another group of companies that are adopting this type of contingency plans belong to the hospitality sector. This activity is also affected by the rising cost of energy and supplies, but, in a very generalized way, they have another almost major problem: the lack of personnel. In this case, the adjustment occurs through schedules and services. Proof of this situation is that, according to the latest Social Security affiliation data, the hotel industry has not yet recovered the level of employment it had before the pandemic: it lacks some 16,000 employed people.

There are not a few bars and restaurants –they assure Cepyme–, that they are eliminating some service of the day such as breakfast or dinner”, according to what the employers of the sector have sent them. This is being, for example, the case of the mythical mid-morning “lunch” in the Levante area, which is being suppressed in numerous bars, not without great displeasure from its most loyal customers.