Skoda Octavia RS iV in the test: plug-in hybrid with a weakness

In the current generation, Skoda had three Octavias with at least 150 kW on offer, and all of them have their place, so to speak. The “small” plug-in hybrid was the cheapest way to tap into the current subsidies with the Octavia. The RS with the 180 kW two-liter petrol engine is the only conventionally powered Octavia in the range for those who consider so much power necessary in such a pragmatic car. There was a surprising number of them in the past, the RS with its dashing tracksuit is still in demand.

The Octavia RS iV is something of a cross between those two. The plug-in hybrids are currently no longer available for purchase, but both are in demand on the used car market. With a test car, we not only want to provide a driving impression, but also show what is important in a used Octavia with a plug-in hybrid. A construction site stands out in this series, which is still very young, and deserves special attention.

Differences between PHEV and combustion engines

First of all, it should be made clear that the Hybrid RS iV is similar to the RS petrol engine on the outside, but does not compete with it in terms of driving impression, despite identical maximum performance. The dress only makes the RS-PHEV look like an athlete, the drive remains much closer to the conventionally clad Octavia iV than the 30 kW difference in system performance would have suggested. The 1.4-liter petrol engine, in conjunction with the electric motor, undoubtedly drives the station wagon far more than just sufficiently quickly, but it does its job well. He doesn’t push himself too hard. This is the right choice for those who prefer the RS look but can do without top acceleration values.

Anyone interested in the plug-in hybrid drive in the Octavia Combi should consider a few things: At 490 liters, the trunk is noticeably smaller than in the models with only combustion engines, which offer 640 liters. In addition, as with so many plug-in hybrids, the talents in terms of electrical use are not particularly pronounced: the battery is only 13 kWh, of which around eleven can be used. Depending on the weather and driving style, you can travel between 30 and 50 km, in the test at around 20 degrees outside temperature it was a maximum of 47 km. 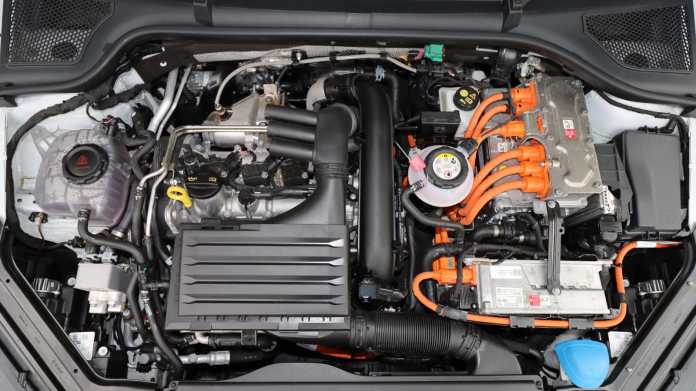 The real electricity requirement including charging losses, i.e. what you ultimately have to pay for, depends on how charging takes place. In the test, it was around 11.5 kWh at a public charging station or a private wall box, and around 1.2 kWh more with the standard charging brick. From this follows: 24.5 to 27 kWh/100 km are at least 24.5 to 27 kWh/100 km in early summer temperatures. As always, other conditions such as frost and/or a rough driving style easily drive consumption significantly higher.

The charging capacity is also only average with a maximum of 3.7 kW. At least for an additional charge, there should be the chance to fill the storage system in two phases with up to 7.4 kW. For example, the Octavia PHEV can block a public charger for hours. 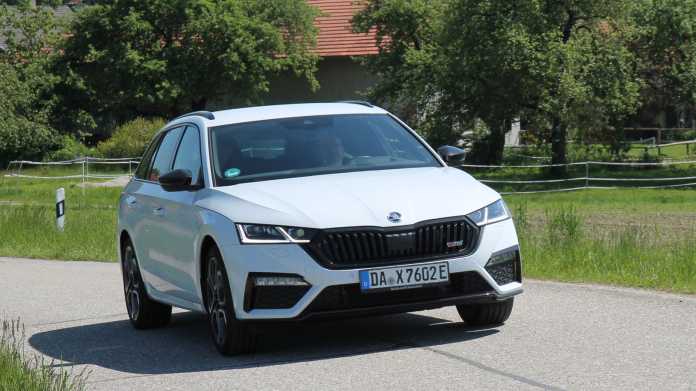 Well-known size on the car market: The Octavia number 4 is selling well. The RS suit is…
(Image: Franz von Ahn)

If you don’t recharge, you have to reckon with at least 5.5 liters/100 km under the conditions described, with us it was a maximum of 8.4. But you have to shoo the small four-cylinder quite a bit, which it handles somewhat grumpily and without any particular commitment. The artificial V8 sound in Sport mode falls under the category “certainly well intentioned”. It sounds so obtrusive that I can hardly believe that one keeps listening to it. It gets even weirder when this sound accompanies the electric drive.

Skoda has actually found a successful compromise with the chassis. Sure, the RS iV is a little tighter than the civilian models, but Skoda has been careful not to overdo it. Response to small bumps is even better than expected, although nobody expects exquisite suspension comfort from this equipment line. On the other hand, the Combi remains a predictable family transporter, which, should the driver overdo it, proves to be a good understeerer. Such a tuning certainly does not win all the hearts of people who like to throw cars quickly around corners, but it seems quite clever here. 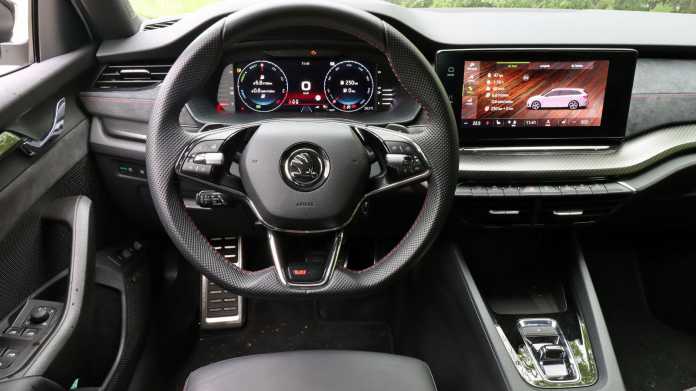 Skoda strives for a residual functionality in a modern environment. This can be recognized, for example, by buttons instead of wiping surfaces on the steering wheel.
(Image: Florian Pillau)

The current Octavia has been on the market since 2020. So it is still too early for a comprehensive assessment of what could be conspicuous in general inspections. In any case, another construction site is emerging in forums. Like all models based on this, the Octavia also struggles with some massive problems in the electronics. Assistance systems and consumer electronics are particularly affected. The Volkswagen Group has responded with numerous updates, some of which have alleviated the problems.

Tickets for Wimbledon 2022: how to buy them and how much they cost