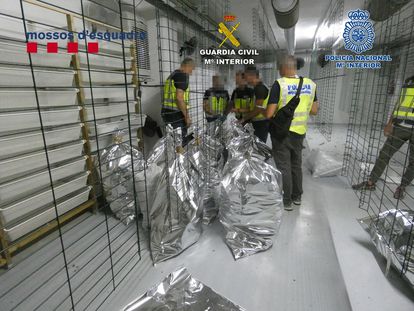 Police officers during the operation, in which four ships have been registered and six people have been arrested in Mataró and Pineda de Mar. MINISTRY OF THE INTERIOR (Europa Press)

The National Police, the Civil Guard and the Mossos d’Esquadra have reported this Friday of an operation against four industrial warehouses where marijuana was grown under the guise of legal hemp. One of the premises registered by the agents, located in Pineda de Mar, belongs to the family of the president of the Generalitat, Pere Aragonès, according to sources familiar with the investigation. The ship was rented to another company, whose administrator is one of the six arrested in the police operation. President Aragonès has no relationship with the ship, according to sources close to him, nor is anyone from the family investigated in the police operation.

The president’s family had rented the ship to a legally constituted company, which proved that it was dedicated to the legal cultivation of hemp, indicate those same sources. The father of the president of the Generalitat has put the situation in the hands of his lawyers after learning of the police intervention. This newspaper has tried unsuccessfully to contact his legal representatives. Lto joint press release of Mossos, Police and Civil Guard maintains that the ships lacked the necessary permits for the legal cultivation of hemp.

In the rented ship owned by the president’s family, located in the Mas Roger de Pineda de Mar estate, the agents found 3,600 marijuana plants and about 10 kilos of buds, according to police sources. It is the smallest of the four and in which the least drug has been intervened. The other three ships, located in Mataró, cultivated most of the marijuana, reaching a total of five tons seized on July 5. In all of them the light was punctured, according to the police.

The four searches are the second phase of an investigation against a criminal organization in which 12 tons of marijuana have been seized altogether. Half of these were found in June, on a ship in Vilassar de Mar. The note from the three police forces details that the dismantled criminal organization used the legal umbrella of hemp plantations, through two legally constituted commercial companies to engage in actually to the cultivation, collection and distribution of marijuana. In total, in the two phases, the agents have arrested 11 people and are looking for another suspect.

Those detained in the second phase of the investigation, which began in March 2021, allegedly maintained a relationship of buying and selling cuttings with the Vilassar de Mar ship, according to police sources. Under the tutelage of the Investigating Court 2 of Mataró, they are accused of drug trafficking and electricity fraud.

In addition, in the records, the agents have found tablets of hashish and marijuana pollen, something, the police maintain, inappropriate for a legal hemp crop. The agents assure that the ships had a high degree of specialization, with all the necessary devices to improve the cultivation.

Apart from the drug, the police have seized 2,000 grow lights, 253 fans, 97 transformers, 32 humidifiers, 16 air conditioners, 4 harvesting machines, 2 machines for packing buds, among others. Some of the ships had “bunker” type security rooms with reinforced steel walls to store the drug and prevent theft.

The cultivation and trafficking of marijuana is one of the priorities of the police in the fight against drug trafficking. The Mossos d’Esquadra have had a specific plan since 2018 to deal with the proliferation of plantations and criminal organizations, fearing that it could infiltrate social structures. Catalonia is also one of the main nurseries in Europe, with constant interventions of this drug, which appears in most police operations, even when they are not directly linked to marijuana.

The Constitutional rejects the last resort to stop the euthanasia of the Tarragona gunman, which already has a date: August 23