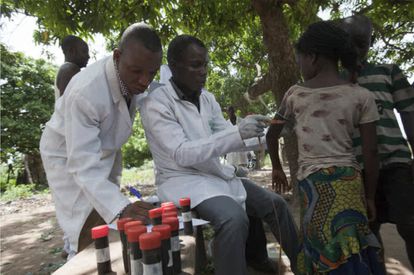 A collection of urine samples to test for urinary schistosomiasis, in 2019. Mogaji Hammed O.

Schistosomiasis – responsible for around 200,000 deaths each year worldwide, mainly in sub-Saharan Africa – is a serious neglected tropical disease (NTD) that affects more than 240 million people. It is one of the most common parasitic ailments in tropical and subtropical countries, regions in which large sectors of the population do not have access to drinking water. And that’s where the problem arises: the infection occurs when the tiny larval forms of the parasite, released by freshwater snails, penetrate the skin during contact with infested water (while bathing, swimming, fishing or washing clothes), they enter the blood vessels and attack the internal organs.

We know that, in the long term, schistosomiasis can lead to liver damage, infertility, kidney failure, bladder cancer or even death, as well as increased vulnerability to sexually transmitted diseases such as HIV. With a less developed immune system, babies and children are especially vulnerable to infection: they can suffer from, among others, growth problems, learning difficulties and chronic diseases. There is currently no vaccine against schistosomiasis, but fortunately there is therapy. In fact, the control of this disease is based on large-scale treatment of population groups at risk, access to clean water, improved sanitation, hygiene education and snail control.

It is in the control of the disease that we are working at Merck. With the aim of eradicating schistosomiasis, we have collaborated with the World Health Organization (WHO) since 2007. During this time we have donated more than 1,500 million tablets of the treatment, which has made it possible to heal more than 600 million children of school in 47 countries in sub-Saharan Africa and other regions. Proof of the important impact of this donation program are the conclusions of the study published in the journal The Lancet Infectious Diseases, which show that the prevalence of schistosomiasis in sub-Saharan Africa among children of school age has been reduced by almost 60% in the last 20 years.

With a less developed immune system, infants and children are especially vulnerable to infection. They may suffer from growth problems, learning difficulties and chronic diseases

Along with this, and through our Schistosomiasis Elimination Program, we have designed an integrating strategy in collaboration with partners and entities around the world, focusing on research and development, treatment, water, sanitation and hygiene, and health education.

Through this program we have also expanded our commitment to Rwanda, a country to which we will provide an additional eight million tablets per year of the only drug that exists to treat schistosomiasis. Not only school-age children, but also affected adults. With a first delivery already made, the treatment is a key part of Rwanda’s strategic plan, which aims to eliminate this disease, which will represent a public health problem in 2024.

At Merck we know very well that by joining forces we can move faster and go further. For this reason, our company initiated the World Alliance Against Schistosomiasis, a coalition made up of very diverse organizations and institutions that collaborate together as a single community, to control and eliminate the pathology. This alliance also drives R&D programs for innovative treatments, including pediatric medication for preschool children, more sensitive diagnostics, and initiatives to improve research and health education capacity in Africa.

The health emergency that has engulfed the world in recent years has put us to the test and has made clear the enormous value of collaboration, while showing us how much we are capable of achieving when those of us who work in the field of health decide do it as a team, sharing and not competing. A lesson that is not only valid to face a pandemic, but also to fight, for example, against many neglected diseases that, like schistosomiasis, devastate a significant part of the world’s population, especially in the most disadvantaged countries.

We are convinced that alliances help us to be more efficient, to reach higher goals in our efforts as a company that wants to contribute to human progress through innovation, and to improve the quality of life for all through science, technology and sustainability in a world in constant movement and change. This is how we work every day in the fight against schistosomiasis and we will continue to do so tirelessly until we eradicate it.

Isabel Sanchez Magro She is the director of the Merck Medical Department in Spain.

Carlos Alcaraz turns into gold: he received virtually 10 million in 2022

A Selectivity that gives meaning to what has been learned: complex to design and just as demanding for students