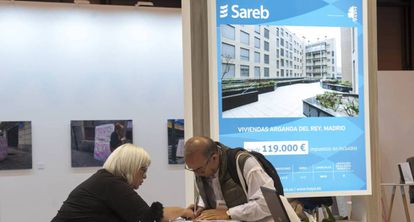 Sareb stand at the SIMA fair in Madrid. Manuel Casamayon

As we assimilate the cost that Sareb or the bad bank is implying for taxpayers (increase in public debt and deficit by 35,000 and 14,000 million euros, respectively), more explanations about what happened are necessary. It must be remembered that official forecasts estimated an annual profit of 14% in this company.

Sareb was created in 2012 in accordance with the Memorandum of Understanding (MoU) agreed between the PP Government and the European authorities. The objective was to acquire the mostly doubtful real estate assets (goods and loans) in order to clean up the financial entities that had required public aid. One of the keys to explaining this ruin is knowing how these operations were carried out. Aristóbulo de Juan, former director general of the Bank of Spain, explained in Congress that “in the rush, which was not the fault of Sareb, there were 15% or 20% of assets that were bought, but they were not identified and even that were not documented, a year and a half or two later, they could not be sold”.

Many experts agree that purchase prices were inflated to relieve struggling banks. A good connoisseur of the case emphasizes that another problem was that loans without collateral were accepted, unlike the bad Irish bank NAMA. The reality is that the NAMA, established in 2009, has been a success. It expects to obtain profits of 1,000 million euros in 2021, which will rise to 4,250 million in 2025, when it is scheduled to end its operations.

The losses recognized by Sareb between 2013 and 2021 amount to 6,701 million euros. Most of them (3,512 million euros) correspond to the cost of nine Interest Rate Swaps (IRS) in the summer of 2013 for 42,221 million euros (the largest in Europe, as De Juan recalled) to cover 80% of the debt “before a possible rise in rates”. It was an expensive mistake. The three-month Euribor rates had been in a sustained fall since October 2011 (1.59%) and continued to fall until reaching negative rates in May 2015 and where they still continue.

Sareb’s 2015 report provides valuable information. It indicates that the part of the risk not covered by the IRS (20% of the debt) “allowed Sareb to enjoy a substantial reduction in the company’s financial cost”. Savings in 2014 were 438 million euros. This means that, without the IRS, taxpayers would have saved more than 2,000 million euros a year at least. IRS operations work like a gamble. What some lose, others gain. In this case, the beneficiaries were mainly Santander and CaixaBank.

Important figures. The State budget for housing in the last decade was 9,117 million euros. Sareb has significant property assets that it has not been able to manage. The Barcelona City Council, the governments of Catalonia and Valencia and other administrations demand thousands of empty homes from society that they would know how to use to cover clamorous social needs. It is never too late to rectify.

Life stopped before Selectividad: "It seems like an eternity to me, but at the same time very little time to study"