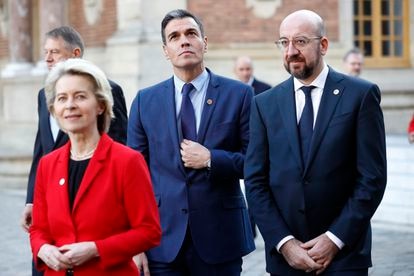 The Spanish president, Pedro Sánchez, between the president of the European Commission, Ursula von der Leyen, and that of the Council, Charles Michel, last March in Versailles (Paris). Chema Moya (EFE)

After the NATO summit, held in Madrid last June, the Spanish presidency of the EU, in the second half of 2023, will be the great showcase for Pedro Sánchez’s international projection. A period that will also coincide with the holding of the general elections, scheduled for the end of the year. It will be the fifth time that Spain assumes this responsibility, which before Sánchez has only held three presidents (Felipe González twice, in 1989 and 1995; José María Aznar, in 2002; and José Luis Rodríguez Zapatero, in 2010). When Sánchez becomes the rotating president of the EU, on July 1, 2023, 13 years will have passed since a Spanish head of government was for the last time.

Spain will be responsible for organizing some 2,000 meetings in Brussels and Luxembourg and will host more than 200 events in its own territory, according to government sources. Given the magnitude of the challenge, the Government created last January the Organizing Committee of the Spanish Presidency of the European Union, which is chaired by the Minister of Foreign Affairs, José Manuel Albares, and whose secretary is the director of the Coordination Office for the Presidency from the EU, Aurora Mejía, from the La Moncloa team. The organizing committee has chosen the 25 cities where high-level meetings will be held; distributing them throughout all the autonomous communities, except Ceuta and Melilla. There is already a venue and date for 22 ministerial meetings, while the appointments in Albacete (where the EU Political and Security Committee), Tarragona and Donosti will meet are pending.

Galicia, the Basque Country, Castilla-La Mancha and Castilla y León will host two high-level meetings each and Catalonia will host three, but Andalusia will be the region where the Spanish presidency will have the greatest presence, since, in addition to three ministerial meetings (in Cádiz, Córdoba and Seville), will host the informal summit of heads of state and government. The exact date is not yet known, because its call corresponds to the president of the European Council, Charles Michel, but it will be in October or November, according to the sources consulted. What has been decided is its location: by Sánchez’s personal wish, it will be held in the Alhambra in Granada. The president, according to the same sources, has sought an emblematic setting that projects the image of Spain internationally —the Nasrid complex declared a World Heritage Site by UNESCO—, as he chose the Prado Museum for the dinner of NATO leaders.

The Alhambra summit will probably be the photo of the Spanish Presidency, but not its most important milestone. That distinction will correspond to the summit between the 27 heads of State and Government of the EU and the 33 of CELAC (Community of Latin American and Caribbean States). It will be the first time that the European and Latin American leaders have met since 2015, although they should do so every two years, which shows the distance between the EU and a region that is considered “the most Euro-compatible” in the world.

Sánchez will not act as host of this meeting, since it will not be held in Spain but in Brussels, since the leading role corresponds to the community institutions. But he will co-chair it with Michel and, above all, it would not take place without the decisive drive from Spain. The EU has already given its approval to the initiative and Spanish diplomacy trusts in a positive response from Latin America.

The blocking of the association agreement between the EU and Mercosur (the economic bloc made up of Brazil, Argentina, Uruguay, Paraguay, Venezuela and Boliva) and the self-absorption of Europe during the long Brexit process have made the European weight in Latin America receded as Chinese influence advanced. Diplomatic sources assure that the European Commission is aware of the need to recover lost ground and that the summit will not be held if it is not held under a Spanish mandate, since the countries that will next take turns in the presidency of the EU, Belgium and Hungary, have other preferences.

Spanish diplomacy is focusing on ensuring that the largest number of Latin American leaders attend this meeting: the issue is on the agenda of Albares and of Sánchez himself (who will tour the region at the end of August), although the occasion for committing their attendance will be the meeting that the foreign ministers of the EU and CELAC are holding in Buenos Aires on October 27 and the Ibero-American summit in the Dominican Republic, which will be attended by the President of the Government and the King, next March, three months away for the Spanish Presidency of the Union to begin.

Barcelona (which will host an informal meeting of Ministers of Transport in September) will also be the scene, around November 28 —Mediterranean Day— of a new meeting of the EU foreign ministers with their counterparts from the southern neighborhood (Morocco , Algeria, Tunisia, Libya, Egypt, Israel, Palestine, Lebanon and Jordan). During its presidency, the Government has wanted to prioritize the recovery of relations with Latin America, but without neglecting its neighbors in the southern Mediterranean, even if it is with a lower-ranking appointment (ministerial), according to the sources consulted.

Coinciding with the second half of the year, the Spanish presidency will be short, since the month of August is considered unworking (only a ministerial meeting of the Ministers of Defense and Foreign Affairs has been scheduled in Toledo). However, the Government believes that it will be full of content, since it is the last complete presidency of the current European Commission. The elections to the European Parliament are held in May 2024, so the European Parliament will be dissolved in April and Ursula von der Leyen’s team —of which the Spanish José Borrell is a member as High Representative for Foreign and Security Policy— must take advantage of the Spanish presidency to promote the latest projects that he wants to carry out before handing over the baton to his successors, already in the summer.

On January 1, Spain will join the EU troika, together with the Czech Republic, which currently holds the presidency, and Sweden, which corresponds between January and July 2023. At that time it will be possible to verify, according to sources diplomatic relations, what are the pending subjects for the Spanish semester and what possibilities does Madrid have to carry out its own priorities.

Although the budget for the Spanish presidency has not been reported, government sources estimate that its cost will be closer to that of the Portuguese or Czech presidencies (40-60 million euros) than that of the French (140). Other sources indicate, however, that, once security expenses are included, the final figure will be around 100 million.

Immigration, Energy and Latin America, priorities for the semester

Reaching a European pact on immigration and asylum, advancing towards a single energy market and relaunching the Union’s relations with Latin America are the three main objectives of the Spanish Presidency of the EU in the second half of next year. These are the priorities that the Government has set for itself ten months after Spain assumes this responsibility, aware however that one of the main tasks of the country that holds the rotating Presidency of the EU is to deal with the ‘black swans’ , unforeseen and urgent events that turn the agenda upside down and alter all forecasts, such as the pandemic in 2020 or the invasion of Ukraine in 2022.

“It is still early to set priorities, much more so in a volatile and changing international scenario like the one we are experiencing, but Latin America will be at the center of our presidency, we will continue to make proposals to order the European energy market and immigration and asylum policy. It will be reflected in our program”, explains the Minister of Foreign Affairs, José Manuel Albares, to questions from EL PAÍS. “The presidency of the EU”, he adds, “will be another opportunity to show that we Spaniards are capable of giving the best of ourselves”.

In terms of energy, the ultimate objective of the Spanish Government is the “single European market”, but what is urgent is that “Europe does not find itself in a situation like the current one”, in the words of Albares, in the face of Putin’s threats to cut off the gas supply. On immigration and asylum, it is about setting up “a true common policy” that “achieves a balance between solidarity and security”. For this, we must leave behind the Dublin pact, which endorses the responsibility of the country for which the asylum seeker accesses the EU, and arbitrate a system that does not force improvisation every time a crisis occurs, such as the waves of refugees of the wars in Syria or Ukraine, assure diplomatic sources.

Banks competing for your mortgage