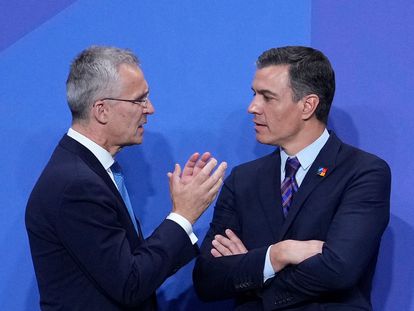 The Secretary General of NATO, Jens Stoltenberg, speaks with the President of the Government, Pedro Sánchez, this Wednesday at the Atlantic Alliance summit in Madrid. Bernat Armangue (AP)

After the Andalusian elections, the Government and the PP have increased the crossfire in a new hostile phase of their relations that again distances possible agreements. At the beginning of the week, the main opposition party raised the decibels to the maximum accusing the Prime Minister of perpetrating an “assault on institutions”, such as Indra, even suggesting a spurious interest in altering the electoral results, and this Wednesday it was Pedro Sánchez who has been very critical of the PP, a party that he says “is not autonomous” because it responds to the interests of “dark” and strong economic powers that, according to what he points out, are trying to end his government. The popular ones have received these words from the president with indignation, whom they see “crossing too many limits”, but have avoided responding to them in public. In this climate of tension, some PP sources acknowledge the difficulty of reaching agreements with the Government, which distances pending agreements such as the General Council of the Judiciary.

Sánchez has rejected this Wednesday in an interview on Cadena SER the PP’s accusations that the PSOE is trying to occupy State institutions. “This whole debate of the PP of a kind of Judeo-Masonic conspiracy that I want to control the INE to alter the electoral result, something that the PP already said in the nineties is absurd,” he said about the resignation of the president of the National Institute of Statistics . “Look, I have not put a militant in charge of the [Tribunal] Constitutional as did the PP, or RTVE. I have not blocked the Judiciary for 36 months. Why do they do it? Let’s look at the United States. A conservative majority in the Constitutional Court can reverse the abortion law.”

In addition, the chief executive has insisted on the idea that he launched on Saturday: “This is a very uncomfortable government for dark powers. I’m not discovering America. Four years ago we changed course to the economic right with a motion of censure that they did not expect. The great drama is that there are two parties on the Spanish right that are not autonomous. We have seen how the head of the PP denounced the corruption in his party and they cut off his head [en referencia a Pablo Casado]. When the Government of Spain proposes a tax on electricity companies, there is a powerful minority that is against it. When we raise the SMI, why does the right say no? Because it represents minority interests. One of the dramas of Spanish politics is that these parties are not autonomous and defend minority interests. I have been suffering from this since 2015, and Zapatero and González suffered before. Some of these right-wing newspapers that criticize me already saw González as the PSOE’s main problem, and Zapatero, and Rubalcaba. This is a reality, we face it with the attitude of saying that they are not going to break us. We are going to continue with our roadmap of social advances and achievements”, he concluded.

In the PP, Sánchez’s words have caused outrage accusing them of not being an autonomous party. Popular official sources assure that the president “is a little out of his boxes” and judge his statements as “surprising and uncontrolled”. “The PP has full autonomy because it is not part of a coalition, unlike the PSOE, which in each vote in Congress has to make concessions that dishonor the historical trajectory of the Socialists”, the same sources affect.

The popular ones interpret that Sánchez “wants to go up the pitch after Andalusia” and is “crossing too many limits”. “Andalusia has left him knocked out and everything about NATO has just faded with 10.2% of the IPC,” argues a leader of the leadership. “It is a reflection of his desperation due to the spiral of government errors,” interprets another. However, no PP leader has come to respond publicly to Sánchez. In Alberto Núñez Feijóo’s team they assure that the popular leader has no plans to do so, because although it would be “tempting to enter an escalation of declarations”, Feijóo is an “institutional” president and has his own roadmap. This happens by centering the shot of his opposition strategy in the economic discourse. The popular leader, who will speak again this Wednesday at a business forum, at the XIX General Assembly of the Madrid Family Business Association, prefers that the focus be on the inflation data, which has run amok in June until 10.2%, the highest level in 37 years, because it is where he believes that it can cause Sánchez the greatest wear. The leader of the opposition has had, on the other hand, to settle for watching on television, like any citizen, the acts of the NATO summit that is being held this week in Madrid, because the government has left him out.

In this rarefied climate between the Executive and the PP, the possibility of an agreement to renew the General Council of the Judiciary (CGPJ) is once again moving away, at least in the short term, according to some PP sources. Last Friday the talks were blown up with the decision of the PSOE to promote a reform so that the council regains its powers to appoint the magistrates of the Constitutional Court and that this happens to have a progressive majority. The PP interprets that the Government no longer has an interest in agreeing on the CGPJ because what really interests it is the Constitutional, and demands that it withdraw the reform to continue speaking. But the atmosphere once again ruins the options of a pact that has resisted for more than three years.

Spain, satisfied with the NATO definition of territorial integrity that protects Ceuta and Melilla