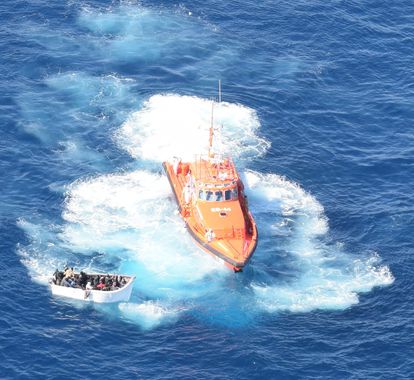 File image of a rescue operation of a small boat by a Maritime Rescue vessel.

Another tragic day on the migratory route that goes from West Africa to the Canary Islands. The Miguel de Cervantes Maritime Salvage ship has rescued this Sunday an inflatable boat that was drifting 278 kilometers south of Gran Canaria with four bodies on board and a single survivor, a 27-year-old man from the Ivory Coast. The migrant has told the rescue teams that at the time of setting sail, 34 people were traveling on the boat whose bodies have ended up in the ocean, according to sources from the rescue agency.

The spokeswoman for the NGO Walking Borders, Helena Maleno, assured this Sunday on his Twitter account that this boat corresponds to one that had left on Saturday, September 24 with these 34 people from El Aaiun (Western Sahara) and had disappeared on the high seas. Finally, she was spotted by a freighter that gave the warning signal. “Seven days of pain and waiting in which there was no news,” says the activist in her profile. “Seven days that ended yesterday with the announcement of a new tragedy in one of the deadliest migratory routes, the Canary Islands.”

At the same time, the Salvamar Alpherazt has rescued 61 sub-Saharans, five of them minors, who were traveling in a canoe about 79 kilometers south of Tenerife, after it was located this Sunday morning by the Sasemar 103 plane, they have informed Efe sources of Maritime Rescue. The immigrants, all men, are in good health and are being transferred to the port of Los Cristianos, where the Salvamar is scheduled to dock at 3:20 p.m. (local time, one more hour on the Peninsula), the same sources have indicated.

The Government of the Canary Islands recently calculated that the number of deaths and disappearances on this route could already be around 1,000 people, as Txema Santana, advisor to the vice-presidency of the Canary Government, explained to EL PAÍS. “The hardest time of the year is yet to come.” This number of deaths represents a worsening of the situation in West Africa. And that, despite the greater migratory control by Morocco —after the turn of the Spanish Government in its position regarding Western Sahara—, has allowed the number of arrivals to drop. Until September 19, 21,518 had been registered, 16.5% less than in the same period of the previous year, according to data from the Ministry of the Interior to which El PAÍS has had access. In mid-March, before the Rabat thaw, the increase in arrivals was 77%.

This greater control, the NGOs working on the ground denounce, “shows the exponential increase in the use of force by the state security forces [marroquíes] in their actions in border territory, considering migrants as a threat instead of as subjects of care and rights.