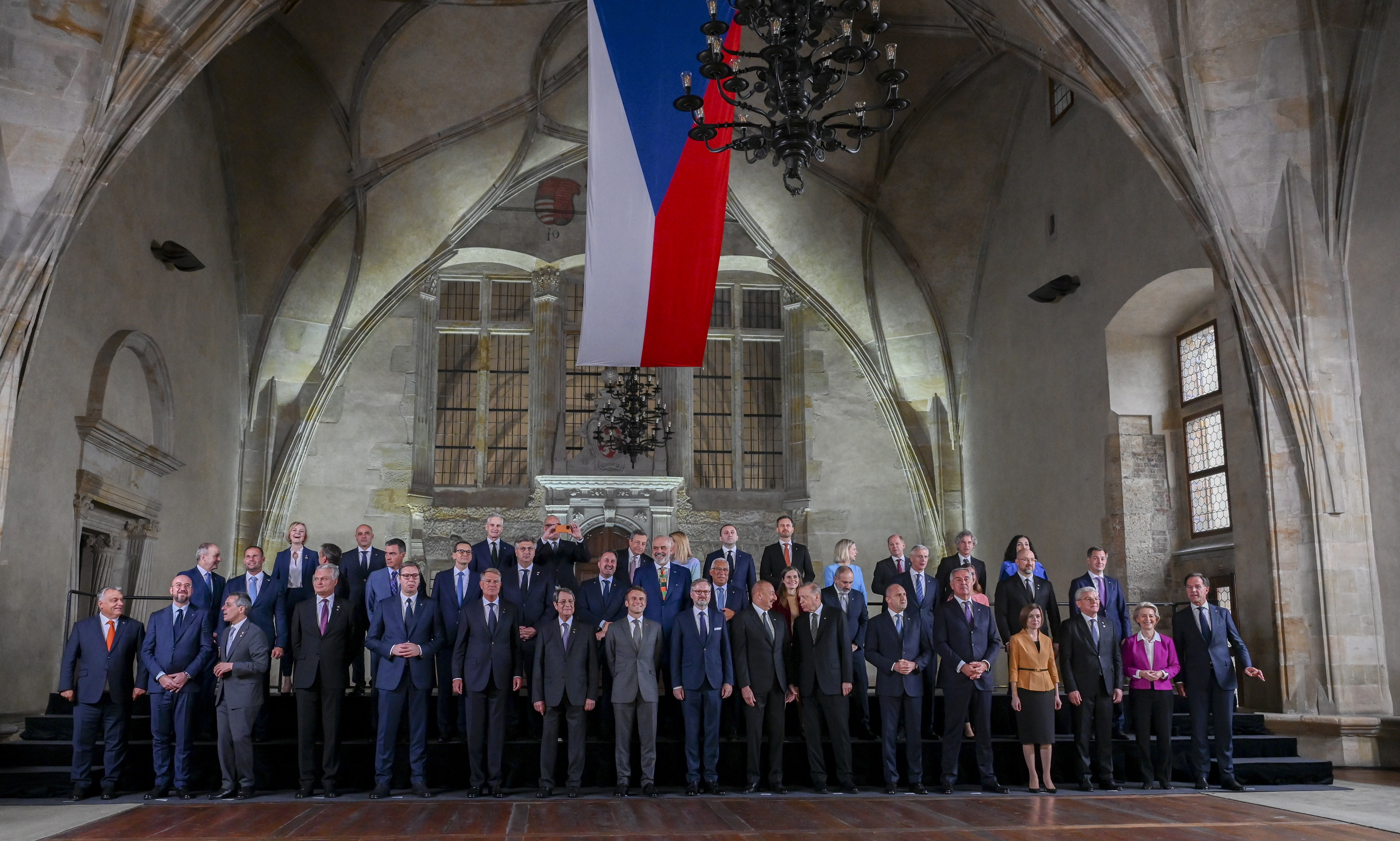 With Russia’s war in Ukraine, nuclear threats and Vladimir Putin’s imperialist appetite as a catalyst, Europe is laying the foundations for a new political community. With a symbolic meeting to make visible a united front against the Kremlin’s aggression, 44 leaders met this Thursday in Prague to launch a European constellation aimed at finding solutions to the deep divisions on the continent on migration, security or energy.

The Russian leader, cornered by his defeats in Ukraine and with more and more open fronts at home, has achieved what only a year ago seemed unthinkable: unite, despite the differences, the 27 EU partners with a country that bet for abandoning them, the United Kingdom; with another, Turkey, which is not clear about wanting to enter the community club despite its status as a candidate and has taken advantage of a summit at a critical moment for the security of Europe to make visible its fracture with Greece at the expense of Cyprus; and alongside a number of countries that have EU membership on their to-do list — such as Ukraine, North Macedonia or Georgia — but have no entry date in sight. Russia and her ally, Belarus, governed by another autocrat who has justified the invasion and who has practically become a satellite of Moscow, have been the only two countries on the Old Continent that have not been invited to the summit.

“This meeting, the European Political Community, has a real possibility of becoming a European Peace Community”, said the Ukrainian president, Volodímir Zelenski, who, again symbolically, opened the session with a videoconference speech. “Members of all existing cooperation formats in Europe, based on our common values, participate in the meeting”, the Ukrainian leader remarked, “and there are no representatives of Russia, a State that geographically seems to belong to Europe but that from the beginning point of view of its values ​​and behaviour, it is the most anti-European state in the world”.

“It does not mean that we want to exclude Russia forever,” stressed the EU’s High Representative for Foreign Policy, Josep Borrell, “but this Russia, Putin’s Russia, has no seat.” The Russian president is likely to be proud of the exclusion of a group that can symbolize that West which, in his opinion, is to blame for all ills. But the head of the Kremlin, who has always dismissed the EU as an interlocutor and has opted for bilateral relations, to fragment and destabilize, may take as a challenge the presence in the new project of countries that he considers part of his sphere of influence, from Moldova and Armenia to Georgia, passing through Azerbaijan.

The new project, still bubbling, incipient, lacks clear prospecting lines beyond the Russian glue that unites them and the energy crisis. Both its magnitude and its variety – also in a certain way the geographical component – raise the question of whether the so-called European Political Community will advance towards a community of values ​​or interests, with uncertainties such as those caused by the presence of Azerbaijan, with serious problems of human rights but with large gas reserves and interests in new supply agreements with the Twenty-Seven, eager to find new suppliers to unhook from the Kremlin’s gas.

Turkey and a rocky start

A duality staged this Thursday by the Turkish president, Recep Tayyip Erdogan, who after receiving the touch of countries like France for helping Russia to skip the sanctions, added that “a just peace has no losers.” Erdogan starred in a harsh speech against Greece on Cyprus – where he maintains the so-called Turkish Republic of Northern Cyprus, occupied in 1974 by Turkey, and recognized only by Ankara – during the official dinner, which was answered by the Greek Prime Minister, Kyriakos Mitsotakis, in an intervention that was not planned and that angered the Turkish leader, who used the post-dinner press conference to stress that Turkey opposes Sweden’s entry into NATO and to accuse Greece of “basing its policies on lies ” and issue a veiled threat by pointing out that Athens understood Ankara’s message when its officials said “we could suddenly arrive one night”. Erdogan has thus crowned a not at all peaceful beginning for the new European project.

The European Political Community, which has started in Prague — capital of the rotating presidency of the EU but also of Czechoslovakia, which was a country occupied by the USSR, which saw how Soviet tanks mowed down its reformist spring in 1968 — and which will continue in Moldova in six months and in Spain in a year, was the idea of ​​the French president, Emmanuel Macron, last May. The head of the Elysee then proposed a new political structure that would allow countries that are decades away from meeting the requirements of entering the EU to be welcomed in an unprecedented cooperation framework. “It is a very important step to reinforce this solidarity cooperation far beyond the EU, with countries with which the Union has had very intense and very important relations for many years”, said the Spanish president, Pedro Sánchez, who has listed : “The Balkans, Turkey, the United Kingdom now since its departure and also all the countries of the Eastern front”.

The result is yet to be seen. For now, despite the fact that many have seen it as a consolation prize for, for example, the Western Balkans or Georgia, those same countries support the initiative that has allowed them a tangible, more immediate link and another meeting forum. It is, said the Lithuanian president, Gitanas Nauseda, like the “United Nations in Europe”. A “historic event”, said his Icelandic counterpart, Katrin Jakobsdóttir. An agora that will serve, Macron has remarked, to defend against threats and to find potential projects – common and bilateral – and advance along other lines, such as the one that brought together the leaders of Azerbaijan and Armenia this Thursday, in conflict over the enclave of Nagorno-Karabakh and who have been experiencing a complicated escalation for a few weeks when Baku attacked territory that is internationally considered part of Armenia.

The participation in the summit of the British Prime Minister, Liz Truss, who spoke of “unity and determination” in the face of the “greatest crisis in Europe since World War II”, was also a sign of the prospects of the new project. And it is seen as a sign that London may be open to compromise on trade deals in Northern Ireland. Truss, who has proposed the United Kingdom as one of the next venues for the new European project, is facing serious problems at home, seeking to maintain its energy pacts with the EU and Norway, and also a cooperation framework with France on migration.

Despite the symbolism of the event, the energy crisis has also deeply marked the agenda of the summit at the gates of a winter that is expected to be complicated and in which many leaders fear that it will ignite the flame of discontent that will end up fragmenting not only unity shown up to now, and which has crystallized in this Thursday’s meeting, but rather its position within internal politics. Polish Prime Minister Mateusz Morawiecki criticized Germany’s injection into its economy to fight rising energy prices, which may be putting the single market at risk. It rains it pours, moreover, according to several angry capitals because there is more and more evidence that Berlin dictates part of the community energy policy.

And in that duality of the new European constellation, between a union of values ​​and another of interests, Macron, who has already made a mantra of criticizing the Midcat trans-Pyrenean gas pipeline —this time, like others, with biased data, later refuted from Spain by the Minister of Ecological Transition, Teresa Ribera—, spoke of the priority of building more electricity connections in Europe and reducing gas prices. “We share the same space, the same history. We are destined to write our future together,” she said. “I hope we can get common projects,” she launched. Projects such as the box of “joint tools” that Norway and Brussels have signed this Thursday to address the gas crisis in Europe.

The European Political Community, has specified the president of the European Council, Charles Michel, does not seek to replace the EU or be a forum of the Twenty-seven with satellites. But with 44 leaders, the discussion formats are not easy. At the summit this Thursday, the heads of state and government have met by topic at two tables. One dedicated to energy, climate and economy, in which the Spaniard Pedro Sánchez participated, and another on peace and security on the European continent.