Hours before Russian President Vladimir Putin signed the annexation treaties for the occupied Ukrainian provinces of Zaporizhia, Kherson, Donetsk and Luhansk, Russian troops have launched the largest recorded attack on civilian targets since April. At least 30 people have been killed and 88 others injured in a missile attack on a convoy of civilians in the Zaporizhia region of southern Ukraine, the country’s Prosecutor General’s Office and national police have reported. This is the episode with the most civilian casualties since the massacre at the Kramatorsk train station on April 8, which left more than 50 dead in the city of Donetsk. This Friday’s attack occurred at 7:15 a.m. local time (6:15 a.m. in mainland Spain), in an old vehicle sales market, dozens of kilometers from the front line, without any type of military presence. “The enemy has launched a rocket attack on a humanitarian convoy leaving a regional center,” Oleksandr Staruj, the Ukrainian governor of the province, explained via Telegram.

The anti-aircraft alarms had not stopped sounding throughout the night, while numerous explosions were heard. Local anti-aircraft defenses tried to repel the impact of Russian missiles for hours, until three of them reached the dozens of vehicles waiting for a safe moment to resume their journey. Hours later, a large crater several meters deep, fifteen meters from the cars, marked the site of the main explosion, the missile that apparently killed most of the victims. “The occupiers launched 16 missiles in one morning against Zaporizhia and the surrounding district alone. Only complete terrorists who have no place in the civilized world can do such a thing,” Ukrainian President Volodymyr Zelensky wrote on his Telegram account.

In the middle of the morning, the corpses, covered with blankets and plastic, had not yet been removed from the esplanade. At least a dozen deceased were still lying on the ground – on the blanket that covered one of them, surrounded by a large pool of blood, the number 17 was written in black. Many other bodies were still inside the vehicles, some accompanied by their pets, also dead. Inside the cars, you could see people of different ages accommodated, along with the packages they were transporting, both in the front seats and in the back seats.

“We were here and suddenly something incomprehensible happened, everything went flying. We got out of the car and ran. I don’t remember anything, I’m in shock,” says Natalia, a survivor of the attack. “There are many dead. The car is nothing. The most important thing is that we have saved our lives,” she adds. 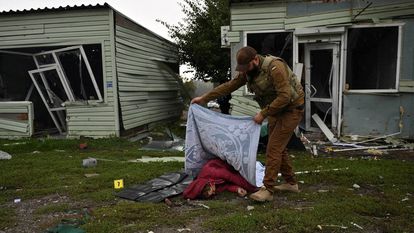 A police officer covers the body of one of the victims. Zaporizhia is located in one of the four provinces that have held pseudo-referenda on annexation to Russia this week, and many civilians have fled the region so as not to be left on Russian territory when President Vladimir Putin signs the Zaporizhia and Kherson annexation treaties this afternoon. , in southern Ukraine, and Donetsk and Lugansk, in the east. STRINGER (REUTERS) 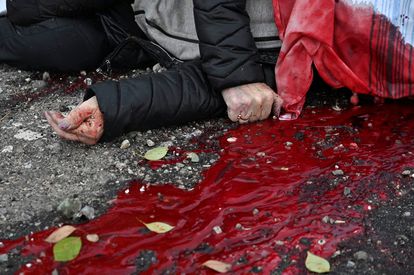 A person’s body remains on the ground after the attack. The regional governor of Zaporizhia, Oleksandr Starukh, has announced that tomorrow Saturday will be a day of mourning throughout the province, after a Russian missile attack killed at least 23 people and injured another 28. STRINGER (REUTERS) 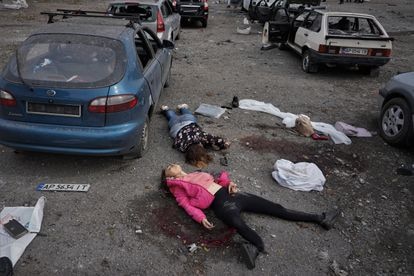 In the image, several civilian bodies lie on the ground after the attack by Russian troops. The UN Security Council will vote today on a draft resolution to condemn the referendums held in areas of Ukraine partially controlled by Moscow and to warn against the Kremlin’s plans to annex these territories, according to diplomatic sources. Luis de Vega 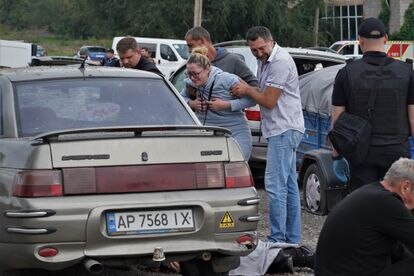 A woman cries next to the body of a relative after the bombing. The local anti-aircraft defenses tried to repel the arrival of missiles for hours, until three of them hit the civil convoy. Luis de Vega 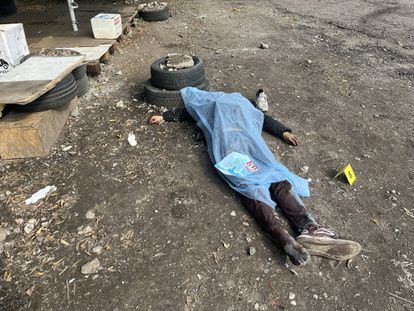 One of the people who lost his life in the Zaporizhia attack. The president of Ukraine, Volodymyr Zelensky, has written on Telegram: “The terrorist state fires missiles at the civilian population in Zaporizhia, Mikolaiv and Dnipropetrovsk”. The leader has called the Kremlin troops “bloodthirsty scum.” Luis de Vega 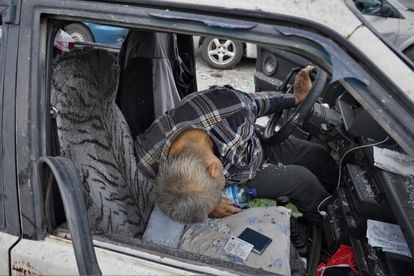 A dead body remain inside their vehicle after the convoy attack. The president of Ukraine, Volodímir Zelenski, has demanded this Friday that his country become part of NATO by the urgent route. He has done it with the still warm corpses of 25 civilians killed in a bombing of the city of Zaporizhia and with the growing threat of Moscow announcing the annexation of four regions of Ukraine. Luis de Vega Crater after the impact of a Russian missile in Zaporizhia. At least thirty cars are affected, destroyed by the explosion and shrapnel. Luis de Vega 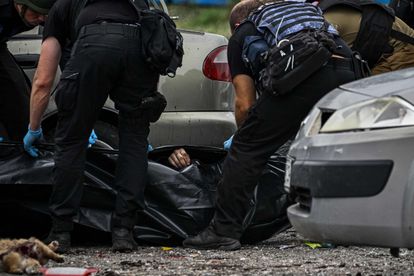 Ukrainian policemen carry the body of a person killed by the Russian attack. GENYA SAVILOV (AFP) 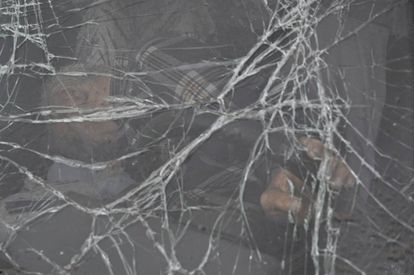 The body of a person remains inside a vehicle after the Russian attack. STRINGER (REUTERS) 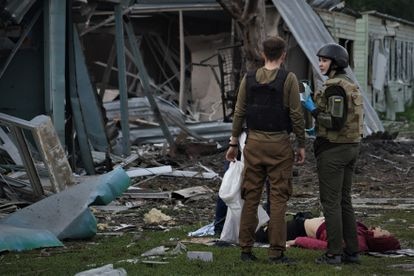 State of the place where the missiles hit. On the ground, the body of a victim. The esplanade attacked is a known area: it is where the main road from the south ends, which runs along the Dnieper River, through which the flow of refugees usually arrives.luis de vega 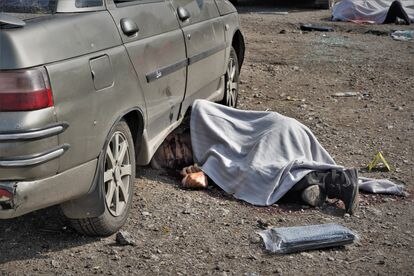 The body of a victim covered by a blanket after the attack. Luis De Vega Hernández 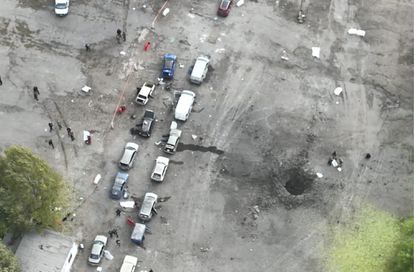 Aerial image distributed by the police showing the crater after the impact of the Russian missile. AP 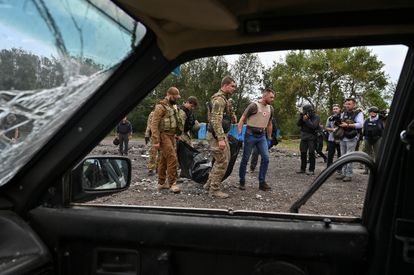 A group of police officers move the body of a person killed by the Russian attack. STRINGER (REUTERS) At least thirty cars were damaged in the blast, with windows shattered and doors ripped out. The criminalistic police, military and members of the Prosecutor’s Office against war crimes have traveled to the place to carry out the investigation. However, every so often the bombed area had to be evacuated: the anti-aircraft alarms that warned of another possible attack continued to occur during the morning, forcing everyone to clear the area, including the few relatives who were coming to recognize the bodies.

The esplanade attacked is a known area. The main road from the south ends at it, which runs along the Dnieper River, through which the flow of Ukrainian refugees usually arrives. Nearby is the shopping center whose car park houses a reception center with NGOs, humanitarian aid and Ukrainian authorities.

Zaporizhia is one of four provinces – in addition to Lugansk, Donetsk and Kherson – that have held illegal referendums this week on its annexation to Russia. Many civilians have fled these regions so as not to remain on Russian territory now that President Vladimir Putin has signed the annexation treaties.

The Russian administrator of the occupied region of Zaporizhia, Vladimir Rogov, has denied that Russia was responsible for the massacre and has blamed the attack on the Ukrainian forces. “They have fired on a group of cars waiting to move to the liberated territory at the exit of Zaporizhia”, he has written in his Telegram account, referring to the territory occupied by Russia.

“It is the classic Anglo-Saxon provocation against the disloyal civilian population”, added Rogov, who assures that the aggression “has been carried out according to the classic formula of ‘they have shot at themselves’, to accuse Russia afterwards. According to him, the attacked people “blocked the road two days ago asking to be allowed to go to liberated territories. [por Rusia]”.

Witnesses uncover the "lies" of Alba, the accused of inducing the parricide of Vilanova