The tasks of identifying the remains of bodies scattered in the shopping center of Kremenchuk (central Ukraine) have not yet been completed when Russian troops have hit a civilian target again, causing at least 21 deaths, including six minors. Two missiles fell after midnight on Thursday on a nine-story residential building and a tourist center in Serhiivka, a town on the Black Sea coast, in the province of Odessa (south of the country), but far from the war front. A 14-storey apartment block was also damaged by the blast wave. “Suddenly we woke up with a tremendous tremor on the ground,” says Oxana Yakovenko, a woman who lives eight kilometers away. Despite her grief over what happened to her neighbors, she couldn’t help but feel relieved to wake up and see that she and her family were safe.

The brutal attack on peaceful and unarmed citizens was accompanied by the usual ceremony of confusion practiced by the Kremlin. As happened this week in Kremenchuk, the Russian government denies the evidence, ensuring that it does not hit civilian targets. But the ruins of the apartment building, among which mattresses and carpets can be distinguished in the midst of the disaster, tell a story opposite to that of Moscow’s propaganda.

Galia Gusachenko’s small cleaning products and clothing store next to the attacked building has been destroyed. This woman, who does not want to enter into controversy — “this is the fault of all the politicians, who have not been able to reach an agreement”, she limits herself to saying — she was sleeping when she heard several noises. She heard her daughter tell her that something horrible had just happened. “The explosion has destroyed a wall of the store. We have spent all morning removing debris and the products from the store that have been saved. I do not understand how something like this could happen, ”she protests. This same Friday, guests were expected to arrive at the nearby tourist center, which has also been destroyed. Gusachenko says that “thank God” they had not yet arrived when the missile hit.

Military and civilians work on rescue tasks. Also in Serhiivka is a team from the Odessa Prosecutor’s Office investigating the commission of war crimes by Russia. Although getting to Serhiivka is not easy. The road from Odessa to the city, which before the war took an hour and a half, now takes almost three hours, since the bridge that connects the famous port city with the south of the province was damaged two weeks ago by the Russian bombs and the continuous military checkpoints that line the highway. Despite this, it was a safer city than others. A volunteer tells that in this town of Odessa there are many internal refugees from the war. Precisely, two of the fatalities are a refugee mother and her son —the father was seriously injured—. 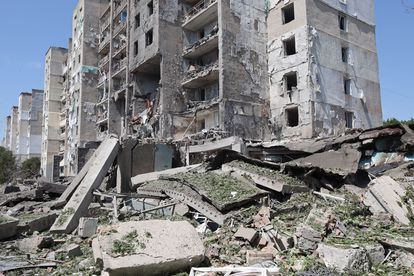 General view of the destroyed building after being hit by a missile in the Ukrainian city of Serhiivka. OLEKSANDR GIMANOV (AFP)

Prosecutor Serhii Kostenko, wearing a black vest that reads “War Crimes. Prosecutor” (War Crimes. Prosecutor) leads the team that investigates both the human remains for later identification and the remains of the Russian missiles to determine the author of the attack. His work will serve to determine the criminal responsibilities of those guilty of the massacre. “It is not enough to say that there has been an attack; you have to prove it”, he affirms with a smile. As he speaks, Ukrainian fighters fly overhead.

Kostenko assures that 16 people have died in the attacked building and another 38 have been injured. In addition, five others have died in the tourist center. “Fortunately, there were few people in that facility. If not, the tragedy could have been much worse,” he adds. Residents of nearby towns tell on social networks that until Thursday 100 children who participated in a soccer championship were staying in the attacked tourist center. They got out in time to save themselves. The coach, Alexander Shishkov, very popular in the area, was not so lucky and died after the impact of the Russian missile, according to local media Suspilne Odesa.

The attack on Serhiivka came just a few hours after the close of the NATO summit in Madrid, in which the allies pledged to assist Ukraine with more weapons, and a day after Ukrainian forces regained control of the small but strategic Snake Island, one kilometer long and only 45 kilometers off the coast of Romania, a NATO member country. Despite Russian explanations that they would have ceded that territory that they controlled since the beginning of the war as “a gesture of goodwill”, it is clear that the Ukrainian Army has retaken it by its own means, which is a success that the country , imbued with warrior ardor, has celebrated with a joy that is hard to find these days. Some in Ukraine interpret the Serhiivka massacre as Russia’s response to the humiliation of losing Snake Island.

Russia has reported this Friday that Russian and pro-Russian forces have reached the gates of the city of Lisichansk, the last bastion under Ukraine’s control in the eastern Lugansk region, after having taken control of a refinery and other industrial zones. in the south and southeast. “The allied forces [rusas y prorrusas] they are directly at the gates of Lisichansk, ”said the spokesman for the Ministry of Defense, Lieutenant General Igor Konashénkov, in his morning war part.

According to the representative in Russia of the self-proclaimed people’s republic of Lugansk, Rodión Miroshnik, the Russian forces have redoubled their offensive on the city of Lisichansk “from four directions”. Miroshnik added that from the south, in the area of ​​the RTI rubber goods factory, his troops “not only entered the city, but carried out ‘clean-up operations’ in the surrounding blocks.”

For its part, the General Staff of the Ukrainian Armed Forces, on its Facebook page, has confirmed that the Russians are attacking with artillery the few positions that the Ukrainians hold in Lisichansk. Russian troops try to encircle Ukrainian troops on the outskirts of this city from the south and west, with a siege that has lasted for days.

In Mariupol another mass grave has been found with more than 100 bodies, according to the mayor’s advisor, Petró Andriushchenko, who added that the exhumations in this port city have been definitively paralyzed. “Sad finds every week. A new mass grave under the rubble on the left bank. Again, more than 100 bodies of people since the end of February,” Andriushchenko wrote on Telegram. 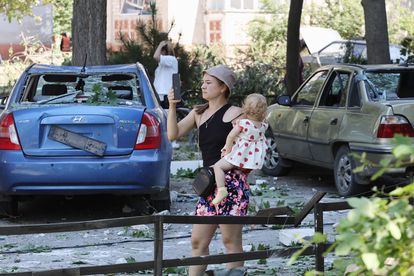 A woman, with a child in her arms, takes a photo of a destroyed building in the Ukrainian city of Serhiivka, near Odessa. OLEKSANDR GIMANOV (AFP)

The man who harassed the artist Paula Bonet for three years, after the trial: "I thought she was in love with me"