Royal Enfield Hunter 350 in the driving report: Too agile, too light and too handy – what?


Royal Enfield Hunter 350 in the driving report Too agile, too light and too handy – what?

Inexpensive to maintain and purchase, satisfactorily processed, iconic and timeless – the Royal Enfield Hunter 350 fills a niche that nobody in Germany has on the screen yet.

Of all 621,197 RE bikes sold in 2021, Royal Enfield sold 550,557 in India alone. This corresponds to 88 percent of the total production. So Europe and the rest of the world is just a niche market for the Indians. That should change with the Hunter 350. And it probably will. Because many Indian colleagues who are committed to Royal Enfield and with whom we spoke on site were disappointed. The Hunter is too agile, too light and too handy to be a real Royal Enfield. What?

Boy do they have problems! What sounds like the end of a cult will certainly open many doors on the other side. B. Govindarajan, the company’s CEO, who accompanied the entire event, also hopes so. He describes the Royal Enfield Hunter 350 as a monumental building block for the continued success of the company. Mechanically, the drive is absolutely identical to the one installed in the sister bike Meteor, a small cruiser that has made it into the top 50 sold bikes in parts of Europe. Even the secondary translation has been retained. But that’s it. Due to a different exhaust system, a modified air filter plus a new map, the engine reacts to gas commands a little more spontaneously than in the Meteor. The frame and almost all attachments have also been newly developed. And you can feel that from the very first test seat. Weighing only 181 kilos with a full tank, the Royal Enfield Hunter 350 feels light as a feather.

Your waist is narrow, the seat height is only 800 millimeters. Short-legged ones will be happy. The handlebars are easy to hold, you sit upright and feel basic trust as soon as you make contact with them. What sounds positive also has a downside. The Hunter acts like a mokick among people who are 1.85 meters and above.

E-Start is via a kill-off switch on the right end of the handlebar. Immediately, the long-stroke designed single tractor stoically forwards. The constant idling flirts with the charm of a stationary engine. Due to its design – air-cooled, two valves – and its Euro 5 homologation, the all-black drive sends just 20.2 hp to the 140 rear wheel via the chain. To achieve this, the crankshaft has to rotate 6,100 times. Its maximum torque of 27 Nm is already available at 4,000 tours. Holy shit, some people will now think, these are values ​​that are assigned to the air-cooled 250cc singles of the 1980s! It’s correct. But what in this country hardly tempts you to jump for joy is considered a big bike and status symbol in Asia. The Royal Enfield Hunter 350 is aimed at the ever-growing middle class who can’t yet afford a car but are tired of driving with ten horsepower. The machine could become the new middle-class mule because it is pleasant and undemanding.

In order for this to succeed, even the thirst is right. The machine should drink just over three liters per 100 km, the tank holds 13 liters. The theoretical range of a good 400 kilometers is extraordinary for such a small, classic bike. All of this goes through your head as the engine poundes nimbly and the Royal Enfield Hunter 350 begins to move. The first test drive goes through midnight Bangkok. The handlebars are narrow enough to trick your way through the endless traffic jams, in first gear and with clutch support you feel your way out into Bangkok’s suburbs. 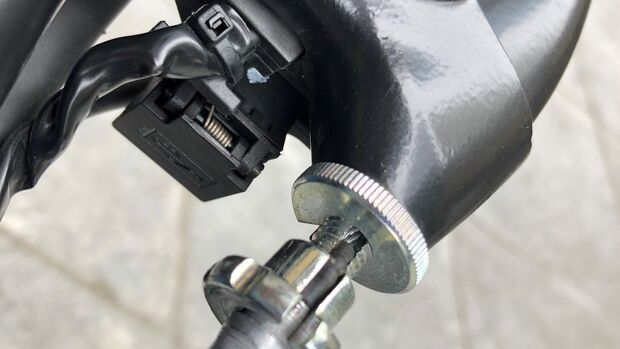 Clutch cable adjustment old school, but underneath is a modern USB port.

The Royal Enfield Hunter 350 is always pleasing. clutch metering? Perfect. gear change? Precise. throttle response? Good. brakes? Do their job unobtrusively. Then the road is finally free, it’s well after midnight. We only had to research the permitted top speed within Bangkok afterwards – a maximum of 50 km/h is permitted. Our tour guide with dyslexia or problems with interpretation took the 50 from midnight as the recommended speed, which should NEVER be undercut. That’s a good thing, because otherwise we would never have found out that the speedometer needle reaches 80 km/h quite quickly, does well up to 105 and at some point, after a few attempts, also shows 120. According to the manufacturer, 114 real km/h should be possible. In order to achieve this, the single plods through all speeds and vibrates pleasantly. A balancer shaft eliminates bad vibrations. In the last fifth of the speed, the Langhuber acts sluggishly, but you forgive him. The drive is elastic over the entire speed range. It also doesn’t take it amiss if you accelerate from low revs in the larger of the five gears.

And that’s fun! Because driving feeling and sound are right. This is surprisingly dull, robust and powerful even without key tricks. Let’s hope it stays that way as the Royal Enfield Hunter 350s raced in Bangkok were pre-production bikes. Production will not start until September. The handling of the 350 is just as flawless as the steering behavior – here not only easy going, but also easy driving is in the foreground. The relatively generous steering angle forms a perfect symbiosis with the short wheelbase of just 1,370 millimeters. The small turning circle is also impressive and the suspension elements do their job satisfactorily. With a travel of 130 millimeters at the front and 102 at the rear, they don’t generate any comfort like that of a GS, but they absorb the rough hits satisfactorily and the small bike remains stable.

When it comes to tires, the Indians rely on the Zoom XL from CEAT. Colleagues who had driven in the wet urged caution. In the dry, however, there is sufficient grip. The processing is 1970-like with little plastic and a lot of no-frills steel, which allows repairs to be carried out by the village blacksmith even in the farthest backwaters of the Pampa. There are few real criticisms of the Royal Enfield Hunter 350, especially considering the expected price point. In Thailand, the Hunter is offered for the equivalent of 3,500 euros, in the home country of India it can be found in shop windows from 2,000 euros. Based on these prices and in relation to those of the sister bike Meteor, it is reasonable to assume that the Hunter will end up somewhere around 4,000 euros in this country. This is a declaration of war. And at the same time an invitation to everyone who has always wanted to ride a nimble heritage bike without having to spend a fortune.

If you are looking for a pleasing, small motorcycle that is just as suitable for meandering on tranquil country roads as it is for commuting in crowded inner cities, you should take a look at the Royal Enfield Hunter 350. It will be on the German market from mid-November.