Ricardo Amils: “If there is life under the surface of the Earth, why isn’t there going to be life on Mars?”

Ricardo Amils (Barcelona, ​​74 years old) with the Rio Tinto can almost be defined as an obsession. Ever since he began his research on this torrent, he hasn’t been able to put it down and has launched it into scientific stardom as a headhunter with an emerging artist. Halfway between the Center for Astrobiology (CAB, CSIC-INTA) and the Autonomous University of Madrid (UAM), his two scientific houses, the microbiologist has spent 35 years seeking to understand what happens in these red waters and below them.

Because the Tinto River seems to be dirty, stained with iron oxide that gives it its red color. But that is its nature. The microorganisms that survive hundreds of meters deep among the minerals of the Iberian Pyrite Belt are to blame. That is the bioreactor theory formulated by Amils and his team, which superseded mining contamination as the cause of the river’s red identity.

Amils has been retired for years, but continues as professor emeritus at UAM. He also continues to watch over his river. The toxic waste dump, which for more than two decades has been imposed at the headwaters of the Tinto River, is also his crusade. The Junta de Andalucía is now planning its expansion to incorporate waste from all over Europe, a business that threatens the ecosystem and the health of the area.

Ask. Are you the one who knows the most about Minas de Riotinto?

Response. I have been working for 35 years, but I am not the one who knows more. I am obsessed with Riotinto, above all, for the ham [ríe].

P. Surely you accumulate anecdotes throughout these years.

R. I remember that, when we started working at Tinto, at the time of the Autonomous University of Madrid, we would get into the river and end up in mud like foxes. One of those days we later went to the Rio Tinto Foundation and asked to speak with the director to tell him that it was an incredible place and that it had to be protected. During these years there has been very good interaction with him, but he told me that that day he was about to call the police because he thought there were some crazy people there telling him about a milonga. 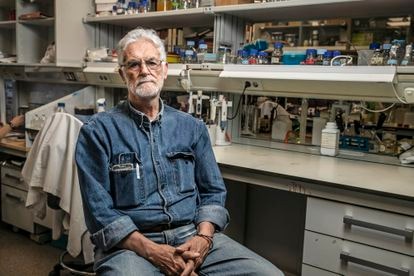 Ricardo Amils, during the interview in Madrid. Alvaro Garcia

Q. What remains to be answered about life in the subsoil of Riotinto?

R. We want to better understand how the system works and that is not going to be trivial. It is a completely different ecosystem than the one we know. These microorganisms live inside the pores of the stones. You have to imagine it! And they have doubling times that we don’t know about. Probably hundreds or thousands of years. How do you study that? You’re going to need several generations of graduates to research the process. The challenge is to be able to study it in situ and that, today, is impossible. Everything we’re doing is in the lab.

Q. How do you study something 600 meters deep?

A. That is what young people are for, so that they think how. Right now I can’t tell you how it can be done. But if we want to understand the bioreactor, it has to be by understanding how microorganisms live there. You can work with a block of stone dug out of the ground, but you’ve already taken it out of context.

Q. Before your bioreactor theory, it was said that mining was the cause of the river being the way it is. What role does mining play in the origin of Rio Tinto?

R. That there is life in the subsoil of the Iberian Pyrite Belt and that it can oxidize metallic sulphides has already been demonstrated. But being able to make the leap to affirm that this is the origin of the Tinto River… There are people who are suspicious and say: “And mining?”. The mining is there. You cannot do the experiment excluding mining because it is also the same type of life, which can survive with or without mining. What mining does is expose what’s underground. The problem is that you can’t tell the iron produced in the underground bioreactor from the one produced when you drilled the hole and exposed the ore to oxygen. We have thought about using isotopes of iron to try to answer those questions.

The challenge in Rio Tinto is to study subsoil life ‘in situ’ and that, today, is impossible

P. The subsoil of Riotinto seems to have convinced you that life is going to be found on Mars…

R. What we are learning on Earth allows us to think that there is life on Mars. Life on the surface of Mars is impossible. First, because we have seen that there is none and, second, because the conditions do not allow it. But at a depth of 50 meters, at a depth of 1,000 meters… there is life on Earth, why shouldn’t there be life on Mars? It is something that has to be proven. We’re on that. Keep in mind that the first scientific article describing life in the deep subsurface is going to be 17 years old. It is recent. Darwin predicted it, but it has taken us many years to prove that it is true. I believe that finding life on planet Earth and also a lot of it, not singularities, makes the possibility of life in the universe expand.

Q. What can you say about the mine basin landfill?

R. That is a particular war.

Q. What about that war?

R. The Socialist Party, at the end of the 1990s, wanted to use Rio Tinto as a dump for hazardous waste. The original idea was to put the dump in the Short Atalaya, a hole produced by open-pit mining. That was ruled out, but they obtained permission to make a landfill in Nerva, near the source of the river. That was a civil war. Half of the population was against and the other in favor. That was 25 years ago. Now, the Junta de Andalucía wants to expand its field of action and bury more waste from all over Europe. The justification at the time was that Huelva is industrial and needed a hazardous waste dump. But of course, if you bring waste from other parts… that implies that the area suffers foreign contamination.

P. Now they are in litigation to see if they paralyze the expansion…

R. Exactly, but we’ve already had time. Luckily the people in the area are aware. The extension was presented when the pandemic began. Now more than two years have passed and the Board, which is the one that has to decide whether the extension is granted or not, has not said anything. He slips away But the war is going to continue because it is indecency. An important part of the leachate excreted by the landfill goes to the Tinto River. It is dangerous, above all, because that pollution, which we do not know well right now, but which we are going to start analyzing, reaches Huelva and the ocean. Precisely in the Huelva area is one of the largest fish farms in the Atlantic.

Q. Are you carrying out any action as a science team?

A. We are now taking samples of the contamination so we can assess the cause. We don’t know what will come out. But, if there are dangerous substances —the most dangerous are heavy metals—, that will be soluble and not only will it be dangerous for the river, but it will reach the ocean. If there is something that causes cancer, for example, it will be a silent problem because the system is going to transport it away.

Q. What other benefits would closing the landfill bring?

R. There are many interests. For example, the Riotinto Foundation and many others, including politicians from the Junta de Andalucía, were in agreement that we make a request for Riotinto as a world heritage site. The first problem we were going to have was that there was a dump at the head of the river, dumping waste into it. If you also give it an expansion permit, you’re screwing up the proposal even more. And if it were made a World Heritage Site, which is difficult, it would be very good for the area, which is very economically depressed.

This interview has been carried out as part of the training activity of the CSIC-BBVA Foundation for Scientific Communication 2021 grants.

"I no longer believe in the love that they sell us"