Reig Plà: as much peaceful peace as rest leaves 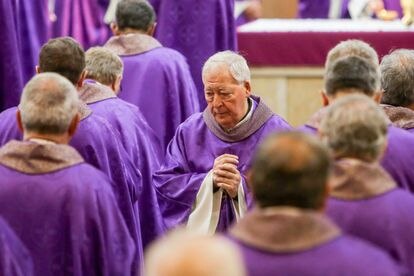 We live in strange times. Companies prefer to get rid of expensive payroll and retire veterans en masse to have their priceless example and teaching on the new ones. Generational change and such, they call it. Blind profitability, they mean without saying it. If there was any area in which gray hairs were respected and the terms of the change of witness were dilated, it was the Church. But that also seems to have changed. Bearing in mind that the Vatican unit of time used to be the century and that the interested party submitted his formal resignation in July, upon his 75th birthday, the express retirement of the Bishop of Alcalá de Henares by Pope Francis, as soon as he returned from vacation , looks more like a sudden termination than a routine retirement. Since he’s the supreme pontiff, Francis must have thought, I’m building a silver bridge to his retirement so you can laugh at the insurance ad.

Whoever is surprised, cast the first stone. José Luis Reig Pla, the bishop who had the miter to say 10 years ago in the Good Friday homily broadcast live on Spanish Television that homosexuals found hell in the bars with little lights, thereby causing him to be repudiated by the City Council in full from the city of his diocese, he had been quiet for a long time. Since the rise of the heterodox? Francisco to Pedro’s chair, relegated his homosexuality re-education courses and his diatribes against abortion, feminism and euthanasia to the depths of his website without allowing himself to be interviewed or make further comments, in the very ancient custom of the Christian sinner of throw the stone and hide the hand. His removal from the front line of the Curia was a matter of time.

It is not known whether the Most Reverend already knew his future or, as happens in many companies, the disgraced person will have been the last to know. On Sunday he said goodbye to his town as he likes best. Becoming mortal flesh covered by his purple chasuble, presiding over the solemn procession of the Virgen del Val, the holy patron saint of Alcalá, returning to his hermitage on the shoulders of soldiers after spending the summer in the magisterial cathedral where his eminence lived his most stellar moments. Now, they will shower him with kisses, commemorative masses and tribute parties by his priests, his nuns and his most unconditional parishioners. Those who will not miss him will be his hundreds of thousands of lost sheep. I wish him the best in his new stage. Perhaps from now on, freed from his devilish crusade against any human passion below the waist, he will have time to listen to others beyond the moral superiority of his pulpit. I have no doubt that he is tired. It must be exhausting to pass judgment on the suffering of others and sleep in the peace of a God who preached loving one’s neighbor as oneself. Take as much peace as rest leaves.