Recharging the car in less than half an hour in Spain is only possible at 1.8% of charging points 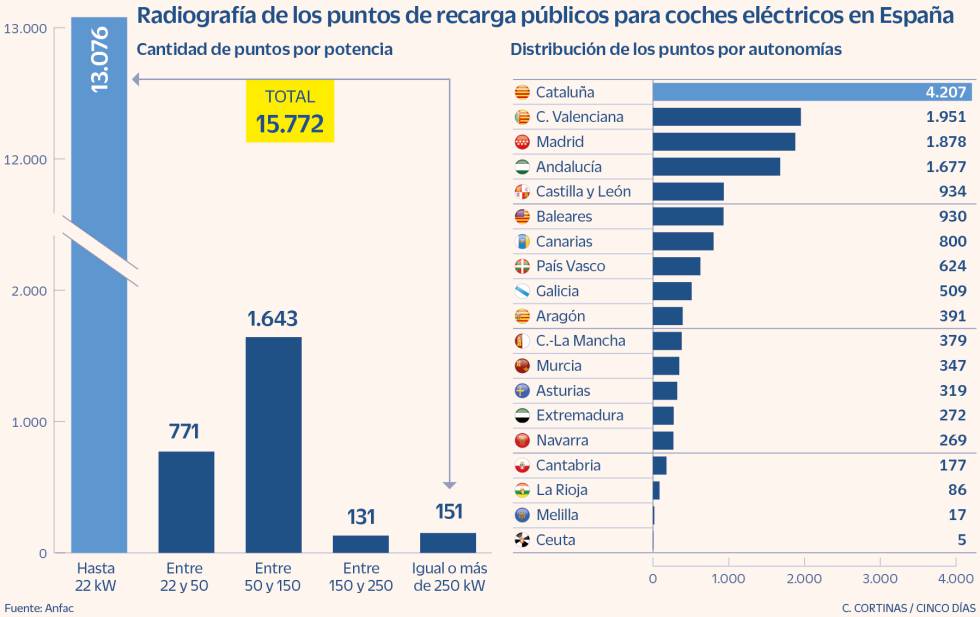 If a user had the urge to charge his electric car at a public point in Spain, two things would probably happen: he could not find a charging station or he had to wait several hours for his vehicle to charge. These are two of the ideas that are extracted from the latest barometer of electromobility prepared by the employers’ association of car manufacturers, Handywhich warns that Spain is in the queue in the installation of recharging points in Europe and that those that exist, for the most part, are from lazy load.

According to the study published on Wednesday, In Spain there were 15,772 public charging points at the end of Junewhich is 10.7% more than in the first quarter of 2022. Of that amount, the vast majority, 82.9%, are points with a power of at most 22 kWwhich have a charging time of a minimum of three hours.

The fastest charging pointsthose that allow the vehicle to be charged in less than half an hour (a minimum of 150 kW), they barely represent 1.8% of the entire networkwith 282 stations spread throughout the country.

According to Anfac, the evolution of this type of points has been “very positive” in the second quarter of the year, with 149 points more than at the end of March. However, the employers indicate that this large increase is not due to the installation of new points, but to the opening to the public of stations that until now had restricted access.

“68% of high-power public access recharging points respond to projects by car manufacturers,” highlights Anfac. As explained by the employers, at the end of the year 45,000 public recharging points will be necessary to comply with the PNIEC (Integrated National Energy and Climate Plan) of the Government, which means that only 35% of the infrastructure that would be needed is installed.

Another aspect highlighted by the manufacturers’ electromobility barometer is the slowness with which electric car registrations are advancing. During the first half of the year, more than 38,000 electrified vehicles (electric and plug-in hybrids), just 31.8% of the units that would be needed to reach the 120,000 cars included in the PNIEC for this year.

In general terms, the barometer, which establishes a score of zero to 100 points in the development of electromobility, gives Spain a score of 14.2, which places the country at the bottom of Europe. The EU average stands at 29.1 points, according to the barometer.

“To improve our position, it is necessary to define binding public objectives for the deployment scheduled per year and powers of the recharging points, as well as making it a reality that a new charging post on public roads works in less than six months, proposals that Anfac urges the Government to take into account,” he said. José López-Tafall, CEO of Anfac. In turn, the manager asked for a “positive taxation” for the electric car and to simplify the procedures of the Moves III purchase assistance plan.