What would you do if you found out you were going to die on your 30th birthday? Everyone lives with a countdown to death, but Jon Cordón’s clock is ticking fast. When he turned 18 the other day at his home in Vitoria, he told his mother with dark humor: “Well, I still have 12 left!” Cordón lives with Duchenne dystrophy, a rare disease in which all the muscles inexorably atrophy. One does not realize that he has 600 muscles until they stand up one by one: first those of the legs, then those of the arms, the tongue, the diaphragm that allows breathing. The last muscle, the heart, usually stops forever by the age of 30. It is a rare disease, but not that rare: it strikes one in 5,000 male children.

Dutch geneticist Annemieke Aartsma-Rus reflects on the prospect of dying at the age of 30. “Before I met people with Duchenne dystrophy, I assumed they would be very sad. And then I met them: they are not sad. They know they’re going to lose muscle after muscle, so their attitude is, ‘I can do more today than I can do tomorrow, so if I want to do something, I’d better do it today.’ That is why they undertake many projects that the rest of us postpone, ”says Aartsma-Rus, of the University of Leiden. “They live life in a more conscious way,” she stresses.

Duchenne dystrophy is a genetic lottery. Human cells have an instruction book divided into some 20,000 chapters, the genes, with the recipes to make the pieces that make up a person. The longest recipe of all is that of dystrophin, a huge structural muscle protein. In people with Duchenne, the vast majority of whom are men, mutations prevent this essential piece from forming. Affected children run around, but before adolescence they need a wheelchair. His brain, however, usually works perfectly. Jon Cordón, who at 18 already requires help to turn over in bed, has just finished high school.

They live life in a more conscious way

Aartsma-Rus is one of the people who knows the ins and outs of this deadly disease best. Her doctoral thesis, two decades ago, opened the way to a new type of treatment: the so-called antisense oligonucleotides, a kind of genetic patch that allows mutations to be skipped and a short version of the protein to be formed. In 2016, the United States approved the first drug with this strategy, eteplirsen, from the American biotech company Sarepta, with a price of around one million dollars for each patient. It is one of the most controversial authorizations in the history of medicines.

Aartsma-Rus herself, whose university receives a percentage of the income from eteplirsen, admits that she doubts its effectiveness. The patch does cause dystrophin to form, but “just 0.4% of normal,” she explains. “The trick works, but I’m not sure that these levels of dystrophin are enough to slow down the progression of the disease. Is it enough to pay that price? I don’t think so”, says Aartsma-Rus, who was passing through Madrid in September to give the inaugural lecture at the Congress of the Spanish Society for Biochemistry and Molecular Biology, sponsored by the BBVA Foundation. 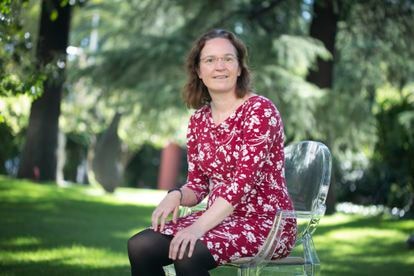 The Dutch researcher Annemieke Aartsma-Rus, a world leader in the field of gene therapies. Santiago Burgos

The US drug agency, the FDA, authorized eteplirsen in 2016 under an “accelerated” route, which allows the approval of promising drugs without proven efficacy, when the disease is lethal. Patient associations have turned in previous months to put pressure on the agency. Billy Ellsworth, a 15-year-old boy with Duchenne, spoke at a meeting of the FDA’s advisory committee, which was attended by a thousand people. “I’m going to beat this damn disease, but I need your help. Please, FDA, don’t let me die early,” Ellsworth implored.

The European Union, however, refused to approve eteplirsen four years ago, waiting to see evidence of its long-term efficacy. Pharmaceutical Sarepta has not yet presented convincing data, but another trial has already begun with an improved version of the drug, called SRP-5051, a species of eteplirsen with a greater ability to penetrate cells. The young Spaniard Jon Cordón is one of the volunteers who participates in this international experiment. His mother, Nuria Valverde, is realistic, faced with a devastating degenerative disease: “Jon is not going to walk again. The goal is for him to stay as he is. If he stabilizes, it’s already a benefit.” At the age of her son, she recalls, is when those affected by Duchenne dystrophy begin to have breathing difficulties and heart problems.

There are about 250,000 Duchenne men in the world. Aartsma-Rus trusts that the new generation antisense oligonucleotides will be able to replace a higher percentage of protein and manage to stop the disease. The Dutch researcher recalls the case of nusinersén, another genetic patch that has shown some efficacy against spinal muscular atrophy, another rare disease that usually kills children before they are two years old. Nusinersén, from the US pharmaceutical company Biogen, costs 400,000 euros per child in the first year. Aartsma-Rus criticizes the opacity in setting these exorbitant prices. “If a company sees that it can charge 200,000 instead of 100,000, it will,” she lamented.

If we bias our scientific judgment by pitying patients, we are doing them a disservice.

Doctor Carmen Ayuso, head of the genetics service at the Fundación Jiménez Díaz hospital in Madrid, affirms that eteplirsen is “a unique case in the history of drug authorization in the Western world”. Ayuso recalls that the FDA approved its marketing in the United States, despite the fact that the agency’s own technicians had recommended not to do so. “The whole process was impregnated with sentimental aspects of the patients, which is an absolute mistake, because, if we bias our scientific judgment by the pity we feel for the patients, we are doing them a disservice. It is counterproductive if it turns out that the drug is not effective, because we are delaying the development of other drugs”, warns Ayuso, winner of the National Genetics Award.

Neurologist Andrés Nascimento asks for patience with antisense oligonucleotides. “There is data to suggest that they can slow the progression of the disease,” he says. Nascimento is Jon Cordón’s doctor in the SRP-5051 trial at the Sant Joan de Déu Hospital in Barcelona. The experiment, with exhaustive monitoring, is a challenge for families, especially those who live in other cities, as Cordón’s mother explains. “We have gone at least 75 times from Vitoria to Barcelona between May and August. It is very hard”, laments Nuria Valverde, who appreciates the “spectacular” treatment that her son receives.

Beyond antisense oligonucleotides, Nascimento is optimistic about a new strategy. His hospital is the first in Europe to participate in the trial of a treatment in which patients are introduced, by means of a virus, the genetic information necessary to manufacture a small version of dystrophin, microdystrophin. In the trial, from the pharmaceutical companies Sarepta and Roche, 120 patients from a dozen countries will participate. The multinational Pfizer is testing another similar treatment in fifty hospitals around the world, including Vall d’Hebron, also in Barcelona.

Nuria Valverde regrets that most families are left out of these promising experiments, while her countdown continues to advance. “All this costs a lot of money and there is not room for everyone. We need a lot of help, because there are many, many children,” says Valverde, a member of the Duchenne Parent Project association, created by mothers and fathers of affected children.

Doctor Jordi Díaz Manera has directed several antisense oligonucleotide trials at the Hospital de la Santa Creu i Sant Pau, in Barcelona. “We need more data to see what the long-term response of patients is. In any case, what we are seeing is a discreet effect”, acknowledges Díaz Manera, now at the University of Newcastle, in the United Kingdom. The researcher believes that “a combination of strategies” will be applied in the future, both therapies that increase dystrophin levels and anti-inflammatory, antifibrotic and muscle regeneration treatments. Díaz Manera also underlines the desire to take advantage of the time that young people with Duchenne have: “They are active patients. I have had career students who have done a master’s degree and who have ended up working. They are people with concerns who try to make their lives full”.