Obsessed with history as the helm of the people, Vladimir Putin does not hesitate to equate his mandate with the power of Peter the Great, the czar who changed Russia. “It seems that he has also fallen to us in luck to restore and strengthen the sovereignty of the country and its ancestral territories; and if we start from the fact that these are the basic values ​​of our existence, we will succeed in this task that stands before us”, assured the head of the Kremlin this Thursday, the day that marks the 350th anniversary of the birth of the first russian emperor.

Peter I (1672-1725) is a sacred figure for the Russians. Creator of the title of Emperor of All the Russias, he conquered the region of Ladoga from the Kingdom of Sweden and founded Saint Petersburg, a city that would become the imperial capital. However, unlike Putin, he opened his doors to the West, from where he brought architects, soldiers and scientists, including the Spanish Agustín de Betancourt.

“Peter the Great fought in the Northern War for 21 years. He looks like he fought against Sweden and took something from them. He did not take anything from them, he brought it back,” Putin assured in a meeting with young entrepreneurs, making an analogy with his current offensive in Ukraine, where Russia has taken control of a large part of the Ukrainian region of Donbas and the entire the Crimean peninsula. Interestingly, the Black Sea peninsula, Hellenic, Roman, Pontic and Ottoman for centuries, did not become part of the Russian Empire until 1783, under the reign of Catherine the Great.

In a meeting with young entrepreneurs, Putin stressed that no European country recognized the territory obtained by Peter the Great for a long time. “Everyone recognized it as part of Sweden despite the fact that, since time immemorial, the Slavs lived there together with the Finno-Ugric peoples,” said the head of state, who took the opportunity to recall that Narva, an Estonian city, was also part of the Russian Empire with Peter I.

During his speech, Putin also reiterated his view that Russia is waging a “war” against the West and globalization to preserve its existence. “Any country, any people, must protect its sovereignty, because there is no middle ground: either a country is sovereign or it is a colony,” said the president, who urged “respect its history, its culture, its language, the peoples who live in a single territory” because “if there is no social consolidation, everything will come crashing down”.

Unlike Peter the Great, inspired in his time by the French and Italian intelligentsia, Putin advocated “achieving technological independence” from the rest of the world, an ambition that led him to call for the standards currently applied to many technologies to be dispensed with. “This technical regulation was designed for imported equipment. Ours should be better, more efficient,” he pointed out.

However, Putin acknowledged that total isolation will be impossible. “We don’t want to substitute imports 100%. No matter how hard we try to replace the purchase of bananas, we won’t be able to,” added the Russian leader, stressing that the world “is big” and is not limited only to China and India as possible partners, but also to Latin America and Africa.

The president has said many times that his mission is the defense of the “Russian world”, and the question of where Russia’s borders end is becoming more and more vociferous in the country. This Wednesday, a deputy from Putin’s United Russia party introduced a bill in the State Duma to revoke the USSR State Council resolution that recognized Lithuania’s independence in 1991. The issue affects not only Ukraine, but also to South Ossetia – which resigned a week ago from a referendum on joining Russia – and Abkhazia, regions that officially belong to Georgia, although the country does not control these territories. And also to the Moldovan area of ​​Transnistria, located in the crosshairs of the Russian generals.

On the other hand, Yandex, the Russian Google, has decided to erase national borders from its maps when it is not known which territories claimed by other countries Russia will annex in the future. According to their press services, they will only show natural features and cities.

Several sources confirmed to the Meduza newspaper, declared a foreign agent by the Kremlin, that Moscow is considering the option of declaring Donbas and the rest of the controlled territory as an “okrug”, a new Russian region. This Thursday, Putin’s spokesman, Dmitri Peskov, opened the door to do so in the future: “Those regions are not currently part of our country, although I repeat it once again: everything will depend on the people’s choice,” said the representative of the Kremlin after admitting that “Ukrainian remains the state language in the liberated territories”, as the Kremlin calls the areas that have fallen under the control of its forces.

Putin’s comparison with past emperors is not new. Vladíslav Surkov, one of his “shadow managers”, whom he commissioned to administer Donbas from the start of the war in 2014 until 2020, equated the Russian president with Octavio Augusto, the first emperor of Rome, just a year ago in an interview in Financial Times. “Octavio came to power when the people distrusted him. He created a different kind of state while retaining the formal institutions of the republic: a senate, a court of the plebs, but all obeyed one person. He thus united the wishes of the republicans who killed César with those of the people who wanted a direct dictatorship, ”he affirmed. 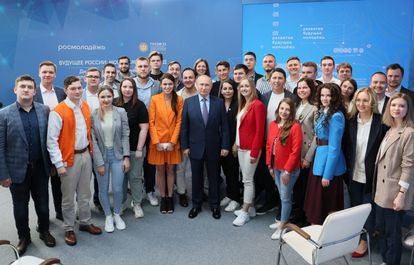 The Russian president during the meeting he held with young entrepreneurs in Moscow on June 9. SPUTNIK (via REUTERS)

One of the Russian leader’s ways to get closer to ordinary people was his Direct Line, an appearance of several hours where the president responded to the concerns of citizens from all over the country supposedly chosen at random. This event, which used to be held in June, was a tradition for two decades, but this year it has been suspended without further explanation.

The cancellation has revived rumors about the health of the 69-year-old Russian leader. These doubts about Putin’s status have been repeatedly denied by the Kremlin in recent years. This Thursday, the magazine Paris Match has published that the president’s feces on his trips are collected by a special service that takes them protected to Moscow. For its part, the investigative outlet Proekt, declared an “undesirable organization” by the Kremlin, reported in April that the president had been treated dozens of times since 2016 by an oncologist and an otolaryngologist.

How was the giganotosaurus in real life, the new 'villain' of 'Jurassic World: Dominion'