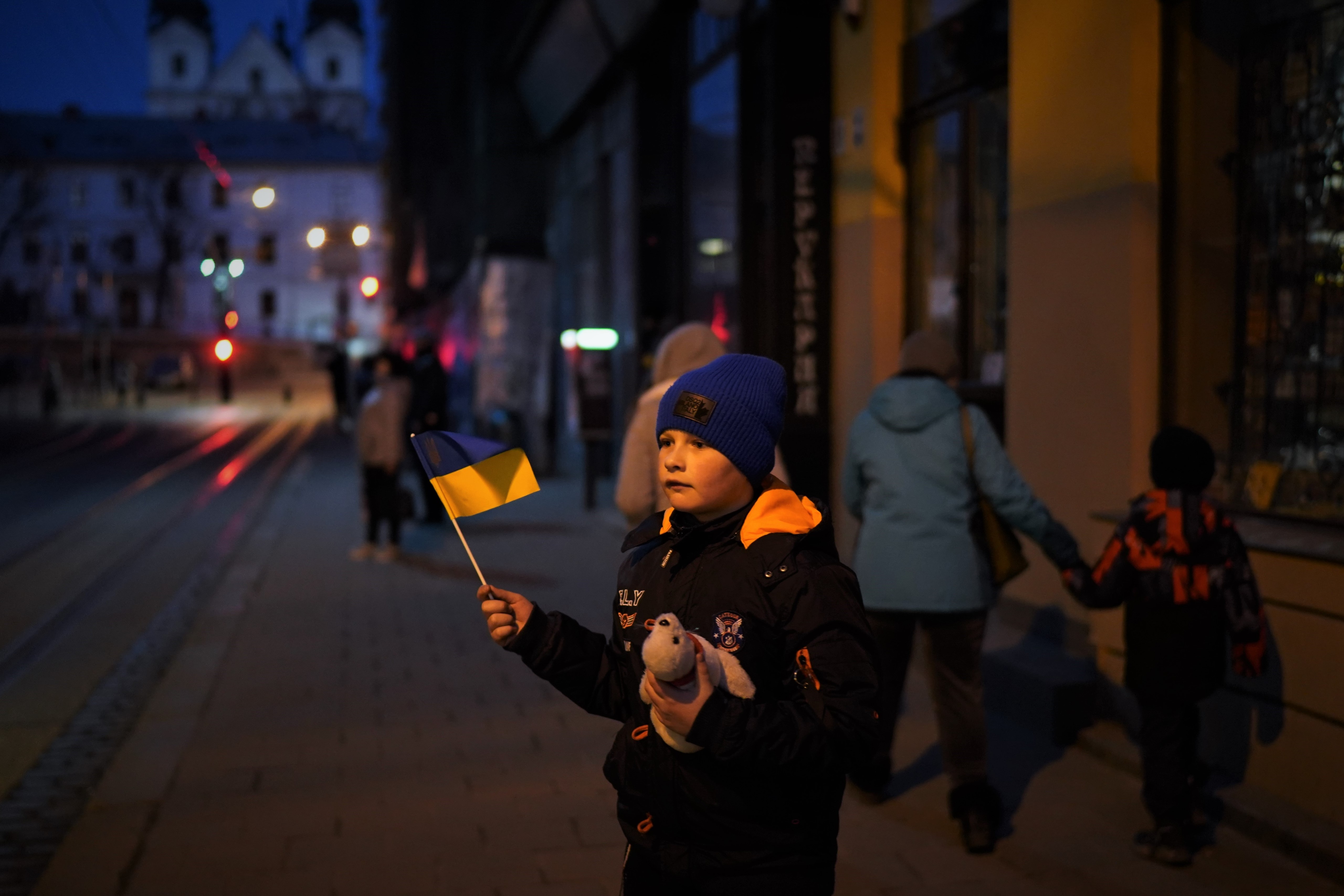 Ukraine is a young state that, since it gained its independence 30 years ago, lives with a neighbor who denies its existence. This neighbor, Russia, wants to subjugate the former Soviet republic militarily since 2014. Ukrainian national sentiment has been growing exponentially since Vladimir Putin ordered the annexation of Crimea that year and promoted the uprising of the separatists in Donbas (in the east). The invasion that began last February has further triggered the population’s affinity for a Ukrainian identity, both in the western provinces and in those closest to Russian culture, those in the east.

Andrew Wilson, Professor of Ukrainian Studies at University College London, wrote in the latest edition of his acclaimed The ukrainians, unexpected nation (2015, Yale University Press) that the Ukrainian national identity is still in the process of being constructed after centuries of being subjected to powerful powers. foreign countries—Poland, the Austro-Hungarian Empire, Tsarist Russia, and the Soviet Union. “Nations are formed by circumstances and opportunities,” Wilson wrote. “Ukrainians like to talk about a ‘national idea.’ Concepts such as ‘nation’ belong to the realm of the political and cultural imagination”, reflected this academic. Putin, according to his thesis, has been the determining circumstance to build the new Ukrainian citizen.

In 2014, according to data collected by Wilson in his book, the feeling of belonging to World Russia (Russki Mir) in Ukraine represented 12% of the population, while in the eastern provinces of Donetsk and Lugansk —in pro-Russian Donbas—, was 24% and 33%, respectively. Eight years later, and with the invasion sweeping the country, one of Ukraine’s leading polling institutions, Rating, reported this spring that the percentage of Ukrainians who still considered themselves essentially Russian had fallen from 12% to 8%. In the eastern regions it was still at 23%, but the most significant thing about the Rating study is that people who consider themselves above all citizens of Ukraine had gone from 75% to 98% in just six months.

“Ukraine has never been considered a strongly cohesive society,” says a study published last April by Oleksandra Deineko and Aadna Asland, researchers in regional diversity at Oslo Metropolitan University. Ruth Ferrero, professor at the Faculty of Political Science and Sociology of the Complutense University of Madrid, put it this way in the book Ukraine, from the Maidan revolution to the Donbas war: “The development of the Ukrainian nation preceded the foundation of the Ukrainian state, which prevents the correct development of a civic national belonging”. The data collected in the study by Deineko and Asland, taken in the first months of the invasion, confirmed that there had been a 180-degree turn: 80% of citizens claimed to be participating in tasks to defend the country; Before the invasion, and with the open conflict in Donbas and Crimea, only 20% said they were involved as volunteers in the survival of Ukraine.

Liubomir Marchenko is a 29-year-old businessman from Dnipro, the fourth largest city in Ukraine (970,000 inhabitants). In Dnipro, the axis between the eastern and western provinces, the majority of the population speaks Russian as their main language, recalls Marchenko: “In 2014 there was no substantial change in the approach to Russian culture because it was seen as something positive; the stars of television and music or literature were Russian”. The current offensive has forced a mutation in this businessman and in his friends: “In 2014 the passion for Russia began to decline, but now the Russian affiliation has been almost completely lost. Now we are fully aware that we are Ukrainians.” Marchenko underlines that this mutation is not so much due to the violence caused by Russia, but because of how the country has reacted: “In 2014, we screwed up in Crimea, Donetsk and Lugansk, but this time the unity of society and institutions has been incredible. This is what makes us proud.”

Ukraine’s independence involved the so-called “de-Russification” of the new state, a process that was accelerated by the pro-European revolution that overthrew pro-Russian President Viktor Yanukovych in 2014. The commitment to promote Ukrainian, a repressed language for centuries, and to review the national history was also received with suspicion from sectors of the east and in the large cities of the east and south —with a population that largely comes from migratory waves of the Soviet Union-. The invasion has caused many Ukrainians to give up the Russian language.

Controversy with the ultra Bandera

Maxim Kultishev is from the north of kyiv and admits that in 2014 he was still oblivious to any national sentiments. The war in Donbas and the annexation of Crimea were far away, he explains, in provinces that are culturally closer to Russia. “But my life changed in March, when my house was bombed,” this 31-year-old man explained last Saturday. The Russian Army unsuccessfully besieged kyiv, leaving a trail of death and destruction in the capital’s suburbs. Kultishev considers himself a patriot for the first time.

The man attended a concert last Saturday by the most iconic poet and musician of contemporary Ukrainian patriotism, Serhiy Zhadan. Zhadan’s performance was a tribute to his friend Taras Bobanich, commander of the Pravi Sektor paramilitary battalion – under orders from the Ministry of Defense – who died last April in combat. Pravi Sektor is an ultra-nationalist group that reached its greatest heights of influence in the Maidan revolution. The Kremlin’s propaganda in which Ukraine is described as a Nazi state focuses on cases such as this group or the better known Azov Battalion. But the truth is that the extreme right has not achieved representation in Parliament against the absolute majority that the Servant of the People has, the party of the president, Volodímir Zelenski.

For Pravi Sektor, but also for liberal patriots like Zhadan, Zelensky before the invasion was little more than an undesirable politician. Too close and conciliatory with Russia, in his opinion. Zhadan himself composed a song in 2019 in which he asked Zelensky to flee to Rostock (Russia), like Yanukovych. When the war began, in February, the poet withdrew the song from his repertoire. Zhadan has international recognition beyond doubt and beyond his literary quality. Last June he received the Hannah Arendt Prize for Political Thought from the Heinrich Böll Foundation of the German Greens. Also in 2022 he has received the prestigious German Booksellers Peace Prize.

This does not prevent the poet and musician from saying during the concert that he will always support Pravi Sektor. First of all, people like Zhadan appreciate that they are fighting on the front lines and that they faced the police of the Yanukovych government on the Maidan. The concert audience was a mix of highly nationally conscious middle-class youth and radical elements of Pravi Sekyor. EL PAÍS saw groups making the Nazi salute, numerous members of the battalion with far-right paraphernalia, even with identifying elements of the Nazi SS. A stall was set up to sell portraits and books dedicated to the historic leader Stepán Bandera and other referents of what was his organization, the OUN (Organization of Ukrainian Nationalists), an emblem of Ukrainian ultra-nationalism. If Bandera is seen in the rest of Europe as an ultra and ally of Nazism in World War II, in Ukraine he is considered by the majority as one of the first fighters for the independence of Ukraine —the German invader deported him to the Sachsenhausen concentration camp for claiming her.

Bandera has dedicated streets in kyiv and in Lviv. The former Ukrainian ambassador to Germany, Andrij Melnik, provoked a controversy this July by defending that Bandera did not carry out mass murders of Jews and Poles. Zelensky has removed him from office. Despite this, it is unlikely to find statements from the Ukrainian authorities rejecting Bandera’s legacy: for many he is above all a national hero in the face of the Russian enemy.

Zhadan has not responded to requests from EL PAÍS for a meeting. In a 2019 interview, he stated that he is not a nationalist, even though he has friends who are, “because Ukraine is much more complex.” Considered a referent of the post-Soviet urban culture of the 1990s, Zhadan added that in the current circumstances “being on the left or on the right in Ukraine makes no sense. Dividing people into left or right today in Ukraine is not constructive.”

Not far from the concert, Anastasia Lazarova, a 40-year-old bank employee, was sitting on the terrace of a bar. She admitted to being uncomfortable with what Pravi Sektor stands for. “The Russian invasion has exacerbated the rejection of Russian culture and language, even denigrating the Soviet victory in World War II,” said this daughter of Russians who emigrated to Ukraine during the Soviet Union. “But the radicals here are a minority, not like in Russia,” she added, “the problem is not them, the problem is Putin.”